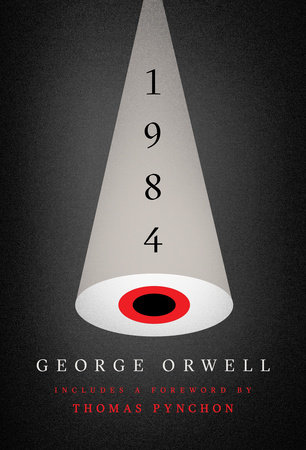 In 1949, on the heels of another literary classic, Animal Farm, George Orwell wrote 1984, his now legendary and terrifying glimpse into the future. His vision of an omni-present and ultra-repressive State is rooted in the ominous world events of Orwell’s own time and is given shape and substance by his astute play on our own fears.

As the novel opens, we learn that in year 1984, the world has been divided into three states: Oceania, Eastasia and Eurasia, all of which, it is said, are almost continually in battle with one another. This world structure has come about following a nuclear war which took place sometime in the 1950’s. In the state of Oceania, a revolution has resulted in the rise of an all-seeing figurehead known only as Big Brother, and a secretive group of individuals referred to as The Party. Under this regime, basic freedoms of expression—even thought—are strictly forbidden. History and memory are actively erased and rewritten so as to support the omnipotence and infallibility of The Party and its pronouncements. To this end, the State even employs its own language, Newspeak, and its own thought process, Doublethink.

It’s against this background that we are introduced to Winston Smith, a low-level Party member (not to be confused with the elite group which surrounds Big Brother) who works in the Ministry of Truth. His job here, paradoxically, is to destroy and rewrite news articles and State facts and figures so as to align them with the most current views of The Party. A resident of Airstrip One—formerly London, England—Smith lives in a world devoid of even the simplest liberties. In this repressive society, where thoughts themselves can be ascertained and monitored, Winston finds himself alone and in quiet “revolution” against Big Brother. Boldly, he even goes as far as to write his own thoughts down on paper— a crime worthy of abduction by the Thought Police.

Early in the novel, Winston meets Julia, another worker at the Ministry of Truth, whom he has been watching from afar. Secretly, the two begin a love affair. This liaison inspires Winston to indulge his ever-growing obsession with revolution, and he and Julia begin to discuss, however implausible, ideas for the overthrow of The Party. Winston’s eventual (and inevitable) capture at the hands of the Thought Police leads to his purification and re-education by inner Party members.

Orwell’s strict attention to detail and realistic description of a world thirty-five years ahead of his own add validity to 1984, and make its larger conclusions all the more frightening. Even today, the novel remains a bleak and shadowy forewarning of what might someday occur.

Eric Arthur Blair (George Orwell) was born in 1903 in India, where his father worked for the Civil Service. The family moved to England in 1907 and in 1917 Orwell entered Eton, where he contributed regularly to the various college magazines. From 1922 to 1927 he served with the Indian Imperial Police in Burma, an experience that inspired his first novel, Burmese Days (1934). Several years of poverty followed. He lived in Paris for two years before returning to England, where he worked successively as a private tutor, schoolteacher and bookshop assistant, and contributed reviews and articles to a number of periodicals. Down and Out in Paris and London was published in 1933.

In 1936, he was commissioned by Victor Gollancz to visit areas of mass unemployment in Lancashire and Yorkshire, and The Road to Wigan Pier (1937) is a powerful description of the poverty he saw there. At the end of 1936 Orwell went to Spain to fight for the Republicans and was wounded, and Homage to Catalonia is his account of the civil war. He was admitted to a sanatorium in 1938 and from then on was never fully fit. He spent six months in Morocco and there wrote Coming Up for Air. During the Second World War he served in the Home Guard and worked for the BBC Eastern Service from 1941 to 1943. As literary editor of the Tribune he contributed a regular page of political and literary commentary, and he also wrote for the Observer and later for the Manchester Evening News. His unique political allegory, Animal Farm, was published in 1945, and it was this novel, together with Nineteen Eighty-Four (1949), which brought him world-wide fame.

George Orwell died in London in January 1950. A few days before, Desmond MacCarthy had sent him a message of greeting in which he wrote: “You have made an indelible mark on English literature . . . you are among the few memorable writers of your generation.”

Maus I: A Survivor’s Tale

Fences (Movie tie-in)
Back to Top