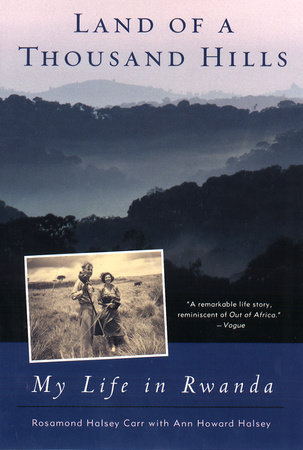 INTRODUCTION
When Rosamond Halsey Carr first arrived in Africa, she had no idea that she would spend the rest of her life there. Land Of A Thousand Hills is her thrilling memoir of her life in Rwanda-a love affair with a country and a people that has spanned half a century. Critics hail it as “a remarkable life story, reminiscent of Out of Africa;” “a testament to the courage, perseverance, and resilience of the land to which she has given her heart;” and “a breathtaking view of Rwanda and its people.” A book that unfolds against the background of Rwanda’s history, from the royal Tutsi dynasty to the present, Land of a Thousand Hillstells the epic story of a woman alone in an exotic land, struggling to survive untold hardships-only to emerge with an extraordinary love for her adopted country and its people.

In 1949, Rosamond Halsey Carr, a young fashion illustrator living in New York City, accompanied her dashing hunter-explorer husband to what was then the Belgian Congo. She packed four cotton dresses and a lifetime supply of cold cream. When her marriage fell apart, she decided to stay on in neighboring Rwanda and found solace managing Mugongo, a flower plantation in the foothills of the Virunga volcanoes.

Whether chugging up the Congo on a paddle-wheel steamboat, rubbing elbows with pygmy chiefs (or wealthy colonial neighbors), being pursued through the dark by a stalking leopard, or visiting friend Dian Fossey and her mountain gorillas at Karisoke, Carr found herself living a life of cinematic proportions. In the process, she witnessed a half century of the politics of a deeply troubled country and saw firsthand the decline and fall of colonialism, the wars for independence, and the relentless clashes between the Hutus and the Tutsis. She experienced everything from near-bankruptcy to tribal warfare to an ill-fated love affair. Following 1994’s Hutu-Tutsi genocide, Carr turned her plantation into a shelter for lost and orphaned children-work she continues to this day, at the age of eighty-eight. Out of an Africa now vanished into memory and myth, this is her extraordinary story.

A memoir written in the grand romantic tradition, Land Of A Thousand Hills brings to vivid life a landscape whose magic is aptly evoked through breathtaking descriptions of everything from rampaging elephants to erupting volcanoes to life on a pyrethrum plantation. It is the story of “a remarkable woman possessed of a great spirit who has had enough adventures for several lifetimes.”

ABOUT ANN HOWARD HALSEY
Ann Howard Halsey traveled extensively to Rwanda to work with her aunt on this memoir. She lives in Downingtown, Pennsylvania.
DISCUSSION QUESTIONS

Learn More About Land of a Thousand Hills
print

My Russian Grandmother and Her American Vacuum Cleaner

Lost in America
Back to Top