A Recipe for Bees Reader’s Guide 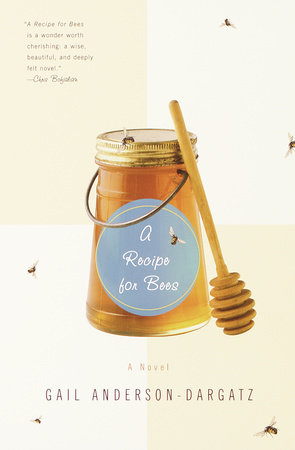 A Recipe for Bees Reader’s Guide

In A Recipe for Bees, Gail Anderson-Dargatz transforms the details of ordinary life into a richly textured portrait of an extraordinary marriage. The questions, discussion topics, and suggestions for further reading that follow are designed to enhance your reading group’s exploration of a novel that celebrates the wonders of nature, the magic of romance, and the endurance of love.

At eighteen, Augusta leaves her family farm and her widowed father to marry Karl Olsen, a taciturn thirty-year-old farmer. On their forty-eighth anniversary, as they wait for news about their son-in-law’s critical surgery, Augusta is swept by memories of the past and of the accommodations and compromises she and Karl have made over their long years together. She recalls joyful childhood afternoons tending bees with her mother, Helen, and doing farm chores alongside her father. She remembers, too, the unsettling gossip surrounding Helen’s friendship with a hired hand, her confusion and pain when Helen dies during childbirth, and her ready acceptance of Karl’s proposal of marriage despite the difference in their ages and natures.

Augusta’s assumptions about the emotional comforts and physical pleasures of marriage are betrayed from the start. She and Karl settle down on a remote farm with his father, a bitter and miserly old man who wields complete control over his son and treats Augusta with cruel disdain. Frustrated by Karl’s indifference to their lack of privacy and intimacy and deprived of close friends and neighbors, Augusta ventures into town in search of part-time jobs and a bit of human company. The local minister persuades her to fish with him on Saturday afternoons, providing Augusta with compassionate companionship and her first taste of independence. When Joe, a handsome, openhearted man, steps into her life, Augusta is ready to be awakened to the sensuality and romance which is missing from her marriage with Karl. With the birth of a child whose paternity is in question and the move to the farm Augusta inherits when her father dies, the Olsens become a family for the first time. But it is Augusta’s discovery of her mother’s beekeeping equipment that, so many years after their wedding, marks the start of the love affair between Karl and Augusta.

Interweaving lore about bees with vivid scenes of domestic life, Anderson-Dargatz illuminates the interplay of dependence and independence, fantasy and reality, that gives life its shape and significance.

1. A Recipe for Bees is set in a rural Canadian farming community. Are the expectations about love and marriage different in an agricultural society than they are in an urban area? How are Augusta’s and Karl’s concepts of marriage shaped by the demands of life on a farm? In what ways does Augusta’s life reflect the kind of life most women were once expected to lead?

2. Throughout the book, there are photographs of the author’s family. Why did Anderson-Dargatz include them? Do they make the story more realistic, as much a memoir as a novel? What other details might lead you to believe that the book is autobiographical?

3. We first meet Augusta as an older woman. How does this first encounter with her shed light on her personality? What clues does it offer about her marriage? About her friendship with Rose?

4. Why is Augusta so attached to Gabe? What characteristics do they share beyond their interest in beekeeping? Are her feelings about Joy equally clear? How does the incident in the bookstore [p. 17] illuminate the relationship between mother and daughter? Which parent does Joy more closely resemble? How does this affect the way Augusta treats her? Does Augusta’s description of the household in which Joy grew up [p. 197] make you more sympathetic to one of them? Why is Joy reluctant to discuss her childhood with Augusta [p. 210]? Do children often have memories that differ from those of their parents?

5. Helen and Augusta both experience premonitions. In what ways does this gift represent a basic difference between the women and their husbands? Is the vision Augusta has during her wedding [p. 59] an accurate prediction of what life holds in store for her? Is the hand that finds hers under the water the Reverend’s or Karl’s?

6. Why isn’t Manny more forthcoming about his misgivings about Karl before the marriage [p. 53]? What does this indicate about Manny’s beliefs regarding marriage and the relationship between men and women? What influence might the suspicions and uncertainties in his own marriage have had on his refusal to "save [Augusta] from herself" [p. 53]? To what extent does Augusta and Karl’s relationship mirror the marriage of Helen and Manny?

7. How do you think Karl would describe the early years of his marriage? Does it fulfill his needs and expectations? Is his style of lovemaking–"brief, to the point, practical, and in the dark" [p. 63]–a result of the circumstances in which they live, or is Karl oblivious to Augusta’s needs and passion? Is his inability to stand up to his father understandable, or does it demonstrate a serious flaw in his character? Why doesn’t he tell Augusta the truth about his mother’s death?

8. Beyond companionship and practical help in finding jobs, what does the Reverend offer Augusta? Why is the relationship important to the Reverend? After they spend several Saturdays fishing together, "It dawned on [Augusta] that the Reverend she’d known all the years of her childhood was a role played, a fiction" [p. 107]. What impact does this realization have on Augusta and the choices she subsequently makes?

9. What draws Augusta to Joe? How does the author capture the romance and sensuality of their affair without providing graphic details? Years later, Augusta "wondered how it was ever possible for the unfaithful to keep their secrets. If they did, it was only because their mates wanted to be misled" [p. 141]. Do you agree? In light of their open meetings in the town café and their public displays of affection, is it possible that Augusta wanted Karl to learn about her affair with Joe? In what ways is Augusta’s affair reminiscent of her mother’s?

10. Why does the town react with such viciousness when the affair becomes common knowledge? Is this the way of small towns, or is Augusta especially vulnerable to gossip? Why does Karl accept the pregnancy with such good grace? Does Joy’s birth and the move to their own farm bring about a basic change in Augusta and Karl’s relationship? Why does their "love affair" really begin when Augusta begins producing honey? How does Karl’s gift of an orchid differ from the other small gestures he has made over the years? What details bring to life their emotional transformation? Does the description of their lovemaking [p. 266] evoke more than just their physical pleasure?

11. Why does Augusta finally decide to tell Joe about Joy after so many years? Why doesn’t she tell Joy that Joe is her father? Why does Joe come to the sale of the farm [p. 287]? Why doesn’t Joy question Augusta more persistently about Joe’s identity when she notices their obvious fondness for one another? In what ways do Joe’s two re-appearances punctuate the flow of Augusta’s life?

12. There are references to death throughout the novel. Augusta endures the deaths of several family members and has premonitions and dreams about death, including her own. What do these events contribute to the message and meaning of the story?

13. To what extent is Augusta responsible for her own discontent? For example, does the passage "Women like that–women who had no trouble finding pleasure for themselves and figured they deserved it as much as their husbands or children–made Augusta angry" [p. 207] show that she is complicit in allowing others to define her role? Given her affair with Joe, is she being hypocritical when she says that "she probably would have been better off if she’d joined them in the fun of a little indulgence" [p. 208]?

14. Would you describe Augusta as a "realist" or as a "romantic"? When she meets Joe years after their affair and he suggests that they see each other again, she says, "I’m not willing to risk everything I’ve built. Not anymore" [p. 262]. Why does she still see Joe as a possible threat to her marriage? What does her infatuation with the old man with the beautiful garden [p. 8] and her recognition that "this was as much a fantasy as her first love for a demon-possessed boy" [p. 303] tell you about her perceptions of herself? How does it relate to her reflection that "she didn’t feel any different than she had at thirty. . . . She had expected that her desires would slacken after the possibility of a child was gone, but they hadn’t" [p. 271]? In what other ways does the author bring Augusta’s sensuality to life?

15. How do the lore about bees, the myths and legends Gabe treasures [pp. 27 and 32], and the passage from Virgil’s Georgics [p. 252] define and strengthen the themes of the book?

16. It is often said that older women are "invisible" members of society. What incidents in the book reflect society’s tendency to marginalize women like Augusta? When Augusta says the other women at the senior center "seemed an embittered old bunch to her . . . digging their heels in against the pull of change, howling for a world long gone" [p. 22], is she guilty of ageism as well? In what ways does Augusta embody common stereotypes about aging? What qualities, if any, make her an exceptional woman?

Gail Anderson-Dargatz is the author of the award-winning novel The Cure for Death by Lightning. She lives on Vancouver Island, British Columbia.
Learn More About A Recipe for Bees
print

No Book but the World
Back to Top