The Cure for Death by Lightning Reader’s Guide 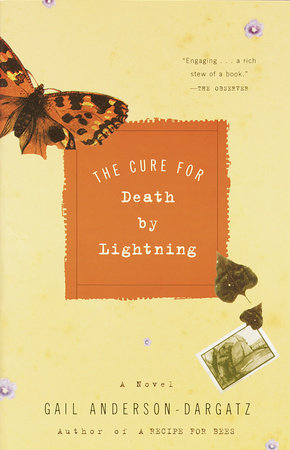 The Cure for Death by Lightning Reader’s Guide

print
The Cure for Death by Lightning Reader’s Guide

The introduction, discussion questions, suggestions for further reading, and author biography that follow are designed to enhance your reading group’s exploration of The Cure for Death by Lightning, Gail Anderson-Dargatz’s powerful novel about a young girl’s coming-of-age in rural Canada during the Second World War. It is told in the unforgettable voice of Beth Weeks, who many years later uses her mother’s scrapbook as a touchstone for her memories. Like the intensely private record her mother creates by juxtaposing brief personal notes, newspaper clippings, family recipes, and folk remedies, Beth’s narrative unfolds in a gloriously idiosyncratic blend of poetry and documentation.

Beth is fourteen years old when her world begins to spin out of control. Her father, badly shaken by an eerie encounter with a savage bear, has become violent and unpredictable, and the family is shunned by all but Bertha Moses and her family of women from the neighboring Indian reservation. Her brother, Dan, longs to join the army to escape his father’s abuse and free himself from a hopeless future on the farm. Beth finds a measure of comfort in milking the cows, preparing meals, and the other daily routines she shares with her mother; but as she wanders through the town and countryside she has known all her life, she can’t shake the feeling that someone is watching her, sliding in and out of the shadows like the mischievous Coyote of Indian legend.

Searching for explanations of dangers both real and imagined, Beth surreptitiously examines her mother’s scrapbook and listens with a new attentiveness to Bertha Moses’ familiar tales about Coyote. Her fear and loneliness lead her into unexpected friendships with two other outsiders: Bertha’s beautiful, sensual granddaughter, Nora, and her grandson, Filthy Billy, a victim of Tourette’s syndrome who works on the Weekses’ farm. Emboldened by their loving attention and her own growing need for independence, Beth ventures further and further from the oppressive atmosphere of her home, defying her father’s rules and her mother’s passivity and braving a world turned dark by a war far away and by inexplicable acts of violence erupting in her once peaceful community.

In a book that brilliantly weaves together supernatural suspense with a graphic, often shocking portrait of troubled lives and times, Gail Anderson-Dargatz proves herself to be a extraordinary interpreter of the interplay between myth and reality, the land and its inhabitants, the forces of nature and those of the human heart.

1) Beth writes, "The scrapbook was my mother’s way of setting down the days so they wouldn’t be forgotten" [p. 2]. In what ways does Mrs. Weeks’ odd collection of clippings, recipes, and remedies fit the conventional definition of a journal or diary? What does it provide that even the most detailed written records lack? How does its form reflect Mrs. Weeks’ character and the life she leads? Beyond the specific entries and handwritten notes, what other details does Anderson-Dargatz include to evoke the atmosphere of Beth’s childhood home?

2) Beth first senses something "coming for" her when she uses the illicit treasures she has hidden in the woods [pp. 3-4]. How does this scene capture not just the material realities Beth associates with growing up, but the emotional changes, including an awakening sensuality, that she has not yet acknowledged? How does the language used to describe the setting enhance this?

3) Why is Beth’s father obsessed with reclaiming the land he contends the Swede has stolen from him [p. 33]? Is it merely a sign of his "craziness" or does it reveal something about how he defines himself and perceives the world? Why is the battle between the two men conducted in silence in the middle of the night? What other incidents shed light on John’s character and the things that are important to him? Why, for instance, does he insist that the porcupine he catches for dinner is a chicken [p. 13]? Why is he able to accept and feel compassion for Goat, who is mocked by the rest of the community [p. 59]?

4) Mrs. Weeks was the same age as Beth when she became the "woman of the house, making the meals . . . and looking after her two younger sisters . . . became her father’s escort to plays and concerts . . . his favorite of the three daughters" [p. 17]. How have the roles she assumed as a teenager shaped her behavior as a wife and as a mother? Does her experience as a teenager explain her inability to discuss intimate matters with Beth? In reserving her thoughts and feelings for her scrapbook and conversations with her dead mother, is she intentionally protecting Beth from her own pain, or is she guilty of evading her responsibilities as a parent? Despite her reticence, do you think she helps Beth understand the pleasures, strengths, and satisfactions of womanhood, as well as its trials?

5) Bertha Moses and her family are the Weekses’ only regular visitors. What is the significance of fact that Bertha’s family is a "house of women" [p. 9]? Beyond offering friendship, what role does Bertha serve in Mrs. Weeks’ life? What does she represent to Beth’s father? How do Bertha’s heritage, as well as her experiences with men, influence the advice and comfort she provides for both Mrs. Weeks and Beth? Do you think that her opinions and attitudes are intended to represent a feminist point of view?

6) In describing Beth’s encounter with Dennis [pp. 30-31], Anderson-Dargatz creates an atmosphere charged with fear, violence, and sexual tension. How does she achieve this? What insight does the incident, including her confrontation with her father, offer into Beth’s understanding of and feelings about the changes that she is undergoing? To what extent are the emotions that Beth experiences "normal," common to any young girl’s sexual awakening? In what ways do they reflect the confusion and disruption that have become part of her everyday life?

7) Caught in a sudden storm, Beth sees lighting roll towards her "like a snake all knotted up, evolving and transforming as I watched . . . and coming right for me, as if meant for me . . . I felt it, shooting through my right arm [p. 79]." Is Beth’s perception a product of her imagination, or do you think the author is suggesting that a supernatural force is at play? What impact does the incident have on Beth’s attitudes and behavior? How does it relate to the title of the novel? In what sense, if any, does it represent death?

8) Why is Beth attracted to Nora? Which qualities does Nora possess that Beth admires or envies? At what point do you become aware of the sexual undercurrent in their relationship? At what point does Beth? What might explain the disparity between the two? What do you think Beth is feelings when she says, "[Nora] smiled at me under those strange two-woman eyes and watched for my every need, in the way my mother now served my father [p. 117]"? Is she comforted or unsettled by the parallels she sees? What do you think underlies Nora’s interest in Beth? Does she feel a genuine love for her, or is the attraction only physical? What other motivations might Nora have for initiating an affair with Beth?

9) What role does Filthy Billy play in Beth’s coming-of-age? Why do you think Anderson-Dargatz made him a victim of Tourette’s syndrome, which forces him to choose between remaining silent and swearing uncontrollably? Why does she stress his unquestioning acceptance of Indian folklore and its rules and rituals? In what ways does Billy embody the intersection of the two different worlds depicted in the novel? What do Beth’s feelings about him at the end of the novel show about her own maturity and self-acceptance?

10) Beth is offered the two explanations of the presence of evil in the world. "Mrs. Bell said all dirt was evil, and it was a Christian woman’s duty to scrub evil away . . . Evil was what crept into your night dreams and made a sinner of you. . . . A woman must guard against the evil men brought into the house on their boots" [p. 16]. Bertha describes Coyote as "not a bad guy exactly. . . . But he’s a clown, a scary little clown, like that Hitler. . . . Always beating his women. Stealing women. Killing women. . . . He doesn’t know about shame, not until the end" [p. 170]. What parallels are there between these two points of view? How is each of them relevant to the questions and fears Beth has about her own sexuality?

11) Images of blood recur throughout the novel, most strikingly in the description of the smashed bodies of turtles along Blood Road [pp. 46-47]. Beth later says, "The storm had carried the red dust of Blood Road to our farm and rained it down . . . covering everything with the blood of turtles, the blood of our recklessness. The blood of a war a thousand miles away" [p. 63]. What else does blood (and the color red) symbolize in the novel?

12) What impact does the war in Europe have on this remote farming village in British Columbia? How has the departure of most of the young men for the army or for factory jobs in the city, as well as the imposition of rationing, affected the social structure of the community and the way people treat each other? In addition to the confrontation between John Weeks and Morley Boulee [p. 10], what other events in the novel reflect behavior that can be attributed to a wartime mentality? Does the picture Anderson-Dargatz draws of life on the home front conform to impressions you have formed about this period from other books or movies?

13) Myths, magic, and the surreal are mixed in with realistic descriptions of the landscape and graphic depictions of the harshness of life on the farm. How do the attitudes of Filthy Billy, Bertha, and the other Native Americans toward natural and supernatural events differ from those of the white characters? What evidence is there that Beth and her mother are more comfortable with the rhythms of the natural world–as well as the surprises it visits upon them–than John and Daniel are? Does this reflect their passive acceptance of their circumstances, or does it represent a spirituality that is lacking in the men?

14) The Cure for Death by Lightning explores many disturbing topics, including physical and psychological abuse, incest, mysterious deaths and disappearance of children, and bestiality. Did you feel that they were essential to the portrait of life Anderson-Dargatz wanted to convey or did you think that her depiction of hardships and horrors excessive? How does the style in which the novel is written, the humor with which many incidents are recounted, and the inclusion of homey recipes counteract its grim atmosphere?

Gail Anderson-Dargatz is the author of The Miss Hereford Stories and A Recipe for Bees. She lives on Vancouver Island, British Columbia.
Learn More About The Cure for Death by Lightning
print

Sweet and Low
Back to Top