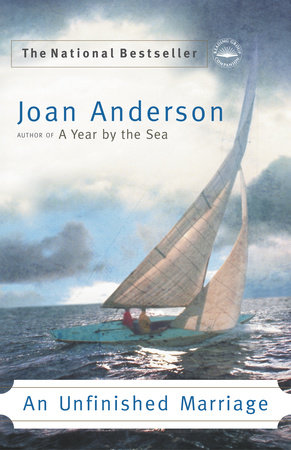 When she first decided to take a year away from her husband, family, and friends, Joan Anderson’s change of course was a courageous effort. Setting out against the tide of expectations, she learned from her inward retreat that a whole world was available to her beyond the duties of wife and mother that she had performed for years.

In welcoming her husband, Robin, into her newly made sanctuary, she surprised her friends yet again. More importantly, she faced a new challenge in accepting the risk of balancing her needs with her husband’s, of disrupting her carefully renewed sense of self. After all, recognizing that the patterns of her life were not indelibly set had been one of the key lessons of her year by the sea. What would it mean to live with someone who, after thirty years of marriage, had come to expect her to behave in a certain way? And would she have the strength to allow him to come to terms with his own unfinished self?

Through the twelve months of An Unfinished Marriage, Joan tested the waters of her family and her old friendships as well as her marriage and discovered that many of her relationships were still open to growth and change. As she looked at the people around her with new eyes, she saw something unexpected in them — a new image of her life as it was and how it could be.

1. Early in the book, Anderson refers to herself as a “recovering wife.” What do you believe she is recovering from? In this case, how is her recovery as a wife related to her husband’s transformation?

2.Anderson refers several times to the state of her marriage once the youthful “hormones” have worn off. Do you feel that there is a chemical or biological component that brings people together in their youth? Or is this shorthand for a different set of processes?

3.One of the most important components of Anderson’s transformation in A Year by the Sea was discovering her capability to be financially independent, yet as Joan and Robin contemplate a shared future, they must make joint decisions about their money — where to spend it, where to earn it, and who owns it. How do the financial changes a couple undergoes throughout a lifetime change their larger relationship?

4.Joan writes wistfully about her marriage, “Who took the magic out of it?” In contrast to the magical romances of Sleeping Beauty and Snow White that we see in childhood, we are taught as adults that Prince Charming doesn’t exist. But is there a kind of magic that brings people together? Romantic fantasy, like fairy tales and romance novels, is certainly seductive — but is it ultimately harmful or helpful?

5.What are the key components that Joan and Robin salvage and “recycle” that allow them to rebuild their marriage?

6.After twenty-five years, Joan and Robin feel a kinship with their summer friends, even though they recognize each other’s shortcomings. How can relationships with others be helpful in the process of redirecting a marriage?

7.At several points, Joan expresses a desire to clear the air or to discuss the unspoken tensions between herself and her husband, her friends, and her children. Do you feel that the sharing of confidences is always beneficial? Are we more hurt by what we say or by what we keep quiet?

8.Joan’s attempt to reenter her marriage with her husband came after a drastic year of change and renewal — a year in which she was uncertain whether her marriage would continue at all. Do you think we need to repair ourselves before we can work on our relationships? Would this kind of reunion have been possible without their drastic separation?

9.Discuss the idea of rescue. Do you feel most often like the rescued or the rescuer? Do you expect someone to rescue you? Do you allow yourself to be rescued?


10.How do children, even adult children, affect a marriage?

11.In A Year by the Sea, Anderson felt the influence of the sea and the seasons throughout her year of renewal. In An Unfinished Marriage, Joan and Robin look back at the history of their cottage and alter it to fit their plans. How does the place we live define us? How great an impact do our surroundings have on us?

12.If you were to be isolated for two weeks, who would you choose to be with? How would it be to be alone with your spouse?

Joan Anderson is a seasoned journalist who has also written numerous children’s novels, including 1787: The First Thanksgiving Feast and The American Family Farm, as well as the critically acclaimed adult nonfiction book Breaking the TV Habit. A graduate of Yale University, she is a frequent speaker on women’s issues and the role of media in our lives. In an effort to share what she learned from her year by the sea, she holds “Weekend by the Sea” seminars, which are designed to help women reacquaint themselves with their feminine heritage, explore the bare essentials in simple living, and learn the art of being present. She has appeared on The Oprah Winfrey Show, the Saturday Today Show, and numerous other broadcasts in connection with A Year by the Sea. Anderson lives with her husband on Cape Cod.


From the Hardcover edition.
Learn More About An Unfinished Marriage
print

Tender at the Bone

Let’s Just Say It Wasn’t Pretty
Back to Top