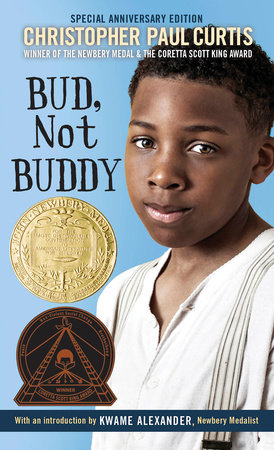 During the Great Depression, a 10-year-old homeless boy sets out in search of a man he believes to be his father.

Bud Caldwell’s mother died when he was six years old, leaving him with nothing but a cardboard suitcase filled with memories and a possible hint of who his father may be. Now, ten years old and on the run, Bud lives among the homeless in Flint, Michigan, until he decides to walk to Grand Rapids in search of his father. Helped by a few kind people along the way, Bud eventually locates Herman E. Calloway, a famous musician who denies Bud’s claim that he is his father. Finally, the contents of Bud’s suitcase provide the clues necessary to prove that Calloway is indeed related to Bud, but not in the way that Bud expects.

Born in Flint, Michigan, Christopher Paul Curtis spent his first 13 years after high school on the assembly line of Flint’s historic Fisher Body Plant #1. His job entailed hanging doors, and it left him with an aversion to getting into and out of large automobiles-particularly big Buicks.

Curtis’s writing-and his dedication to it-has been greatly influenced by his family members. With grandfathers like Earl “Lefty” Lewis, a Negro Baseball League pitcher, and 1930s bandleader Herman E. Curtis, Sr., of “Herman Curtis and the Dusky Devastators of the Depression,” it is easy to see why Christopher Paul Curtis was destined to become an entertainer.

Bud, Not Buddy, set during the Great Depression, offers students the opportunity to think about the hardships that the American people experienced during this time in history. Through the homeless main character, students are asked to explore the themes of family, survival, and hope. They are also challenged to think about how racism further threatened the lives of African Americans during this period. Though the living conditions in the novel seem bleak, the main character never loses his sense of humor and offers young readers a survival story with a happy ending. The novel is an ideal choice for read-aloud or a class novel study. In addition, this guide offers activities for using the novel to connect language arts, social studies, science, art, and music.

Ask students to research the causes of the Great Depression. How did it affect families of all socioeconomic levels? Tell them that Bud, the main character in the novel, is homeless and goes to a mission for a hot meal. Find out other types of organizations that helped people during the Great Depression. Then have students find out what organizations in their city or town provide food and shelter for the homeless today.

Family and Relationships
Ask the class to discuss Bud’s relationship with his mother. What are some of his special memories of her? Why did his mother never tell him about his grandfather? Why do you think Bud’s mother left home? Changed her last name? If Bud’s mother was so unhappy, why did she keep the flyers about her dad’s band?

Why is Bud so convinced that Herman Calloway is his father? Discuss whether Bud is disappointed to learn that Calloway is not his father but his grandfather. What type of relationship do you think Bud will have with his grandfather? How is Calloway’s Band like a family? What is Miss Thomas’s role in Bud’s new family?

Survival
Bud has been without a family since age six. What type of survival skills does Bud learn at the Home? Make a list of “Bud Caldwell’s Rules and Things for Having a Funner Life and Making a Better Liar Out of Yourself.” How does Bud use these rules to survive difficult situations? Have the class discuss whether Bud will continue using these rules now that he has found a family.

Hope
Ask the class to discuss how the flyers in Bud’s suitcase give him hope. Bud’s mother once told him, “When one door closes, don’t worry, because another door opens.” (p. 43) How does this statement give Bud the hope he needs to continue his search for his father? Discuss the moments in the story when a door closes for Bud. At what point does the door open? Cite evidence in the novel that Herman Calloway had hope that his daughter might return.

Racism
Engage the class in a discussion about the different types of racism. Bud encounters racism throughout his journey. Ask students to explain Mrs. Amos’s statement: “I do not have time to put up with the foolishness of those members of our race who do not want to be uplifted.” (p. 15) How does this statement indicate that Mrs. Amos feels superior to Bud and other members of her race? Why does she think that Bud does not want to be uplifted?

Bud meets many homeless people at Hooverville. What evidence is there that racism prevails among them? How does racism affect Herman E. Calloway’s band? Eddie tells Bud, “Mr. C. has always got a white fella in the band, for practical reasons.” (p. 205) Discuss what the “practical reasons” might be. How does this reflect the times? Would Mr. Calloway’s reasons be valid today?

Language Arts
Bud has special memories of his mother’s reading to him. He remembers the little lessons that he learned from the fables that she read. Have students select one of “Bud Caldwell’s Rules and Things for Having a Funner Life and Making a Better Liar Out of Yourself” and write a fable, using the rule as the lesson learned.

Explain to students that a euphemism is a word used to soften the meaning of a word that may suggest something unpleasant. For example, Bud says, “I don’t know why grown folks can’t say someone is dead, they think it’s a lot easier to say gone.” (p.178) Ask students to brainstorm other euphemisms for dead.

Ask students to explain the metaphor, “The idea that had started as a teeny-weeny seed in a suitcase was now a mighty maple.” (p.146) What is the “seed”? The “mighty maple”? Ask students to find other examples of figurative language in the novel.

Social Studies
John Dillinger, Pretty Boy Floyd, Baby Face Nelson, and J. Edgar Hoover are among the notorious figures mentioned in the book. Send students to the library media center to research these people and to find out when the FBI was formed. What is its primary purpose? Who is the head of the FBI today? What names are currently on the FBI’s most wanted list?

Policemen inspect Lefty Lewis’s car because they are searching for labor organizers who are sneaking to Grand Rapids from Detroit. Ask students to find out about the history of labor unions and the existence of unions today. Then have the class debate the pros and cons of labor unions.

Science
Lefty Lewis sends Herman Calloway a telegram telling him about Bud. Have students construct an illustrated timeline that shows the development of communication from the invention of the telegraph to today’s new technologies. A good choice to introduce students to the earlier time of the pony express is the picture book The Sweetwater Run by Andrew Glass.

Art
It is obvious at the end of the novel that Bud is being groomed as a band member. Design a flyer for Bud’s opening night with Calloway’s Band. Encourage students to give the band a new name in honor of Bud.

Winner of the 2000 John Newbery Medal

“Curtis has given a fresh, new look to a traditional orphan-finds-a-home story that would be a crackerjack read-aloud.”
–Starred, School Library Journal

Fish in a Tree

Harbor Me
Back to Top