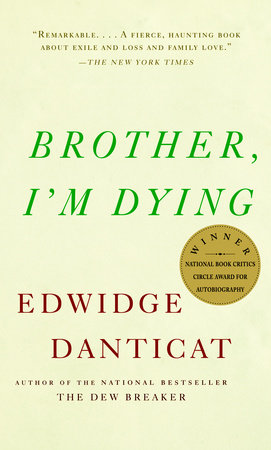 “Remarkable. . . . A fierce, haunting book about exile and loss and family love.”
—The New York Times

The introduction, questions, and suggestions for further reading that follow are intended to enhance your group’s discussion of Brother, I’m Dying, a memoir of the tragedy and losses of a Haitian family and the hope of a new life in America.

When she was four, Edwidge Danticat’s mother left Haiti to join her father who had gone to New York two years earlier, leaving her and her younger brother, Bob, in the care of her father’s brother, Joseph. Edwidge came to think of her uncle Joseph as a second father because he treated her with such tenderness and because, as a minister, “he knew all the verses for love” [p. 35]. Until she was twelve, when she finally joined her parents in Brooklyn, she lived in the Bel Air section of Port-au-Prince as a member of her uncle’s family. While Edwidge struggled to integrate herself into her parents’ household (she and Bob were joining two brothers born in America), her uncle was absorbing the challenges of life in Haiti as its political situation deteriorated and violent gangs gained in power. The story Danticat tells is often disturbing as the people she loves are exposed to misfortune, injustice, and violence, but ultimately, Brother, I’m Dying is reassuring in its expression of deep familial love and enduring bonds.

1. Danticat tells us that she has constructed the story from the “borrowed recollections of family members. . . . What I learned from my father and uncle, I learned out of sequence and in fragments. This is an attempt at cohesiveness, and at re-creating a few wondrous and terrible months when their lives and mine intersected in startling ways, forcing me to look forward and back at the same time” [pp. 25-26]. Discuss what this work of reconstruction and reordering means for the structure of the story she presents, as well as for her own understanding of what happened to the two brothers.

2. Consider the scene in which Danticat sees the results of her pregnancy test. How do her fears for her father affect her first thoughts of her child? She says to herself, “My father is dying and I’m pregnant” [pp. 14-15]. How does this knowledge change her sense of time? How does it affect her understanding of the course of her family’s history?

3. As a child, Danticat was disturbed at how little her father said in the letters he sent to the family in Haiti. He later told her, “I was no writer. . . . What I wanted to tell you and your brother was too big for any piece of paper and a small envelope” [p. 22]. Why, as a child, did she “used to dream of smuggling him words” [p. 21]?

4. How does young Edwidge retain her loyalties to her parents, even though they are absent from her life for so many years? Is there evidence that she feels hurt or rejected by their decision to leave for the States? How does she feel when they come back to visit Haiti with two new children [pp. 87-96]?

5. Haiti’s history is briefly sketched on page 29 and elsewhere. While many readers will know that Haiti was a slave colony, why is the fact of the American invasion and nineteen-year occupation less well known [p. 29]? Danticat’s paternal grandfather, Granpè Nozial, fought with the guerrilla resistance against the Americans. How does the family’s engagement with Haiti’s political history affect Joseph’s unwillingness to emigrate to the U.S.? Why does he refuse to leave Haiti, or even to remove himself from the dangers of Bel Air [pp. 30-36]?

6. If so few words are passed between Danticat’s parents and their two children in Haiti, how is emotion transmitted? Is there a sense, in the book, that Danticat is emotionally reticent even after her reunion with her parents? Why is she reluctant to tell her parents the news about her pregnancy [p. 44]? Why is it important that her father gave her a typewriter as a welcoming present [pp. 118-20]?

7. Danticat found a scrap of paper on which she had written, soon after coming to Brooklyn, “My father’s cab is named for wanderers, drifters, nomads. It’s called a gypsy cab” [p. 120]. What does this suggest about how she understood, or thought about, her father’s work and her family’s status in America? What does it reveal about a young girl’s interest in the power of words?

8. Brother, I’m Dying is Danticat’s first major work of nonfiction. What resemblances does it bear-if any-to her works of fiction in terms of style, voice, content, etc.?

9. Danticat says of her story, “I am writing this only because they can’t” [p. 26]. As a girl, Edwidge was often literally her uncle’s voice, because after his tracheotomy she could read his lips and tell others what he was saying. Why is it important that she also speak for her father and her uncle in writing this memoir?

10. Consider the relationship between the two brothers, Mira and Joseph. There is a significant difference in age, and Mira has been away from his brother for decades, by the end of the story. Despite this, they remain close. What assumptions about kinship and family ties are displayed in their love for each other? Are these bonds similar to, or stronger than, ties you would see between American-born brothers?

11. When Danticat describes the death of her cousin, Marie-Micheline, or her uncle’s list of the bodies he has seen on the street, or when she recounts the story of the men laughing as they kick around a human head, or the threat of the gangs to decapitate her uncle Joseph, or the looting and burning of his home and his church, what is your response as a reader? How does this violence resonate against the warmth and love that are so clearly expressed by the feeling of Danticat’s extended family members for each other?

12. How does Danticat convey a sense of the richness of Haitian culture? What are the people like? What are their folk tales like? How does their use of both Creole and French affect their approach to language and speech? How does she make us feel the effects of the violence and poverty that the Haitians endure?

13. Does what happened to Joseph while in custody in Florida suggest that racist assumptions lie at the heart of U.S. immigration policy? Is Danticat right to wonder whether this would have happened had he not been Haitian, or had he not been black [p. 222]? Does it seem that the family could have taken legal action against the Department of Homeland Security?

14. Danticat’s description of what happens to her uncle in U.S. custody is reconstructed from documents. How does Danticat control her emotion while presenting these events? How, in general, would you describe her writing style as she narrates these often devastating events?

15. Danticat relates her Granmè Melina’s story about the girl who wanted the old woman to bring her father back from the land of the dead [pp. 265-67]: what is the effect of her decision to end the book with this story? How does the story reflect on the book as a whole, and on the act of writing?

16. As one reviewer put it, “If there’s such a thing as a warmhearted tragedy, Brother, I’m Dying is a stunning example” (Yvonne Zipp, The Christian Science Monitor). Do you agree? If so, what elements in the writing and the story contribute to this effect?

Edwidge Danticat is the author of numerous books, including Breath, Eyes, Memory; Krik? Krak!, a National Book Award finalist; The Farming of Bones, an American Book Award winner; and The Dew Breaker, a PEN/Faulkner Award finalist and winner of the first Story Prize. She lives in Miami with her husband and daughter.

I Am a Soldier, Too

All Over but the Shoutin’
Back to Top