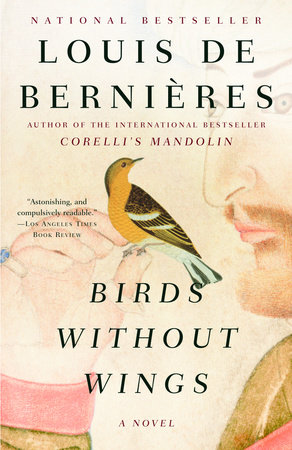 The introduction, discussion questions, suggestions for further reading, and author biography that follow are designed to enliven your group’s discussion of Birds Without Wings, Louis de Bernières’s eagerly awaited follow-up to the acclaimed Corelli’s Mandolin. By turns hilarious and heartbreaking, Birds Without Wings is a hugely ambitious novel about the pleasures of peace, the meaning of home, and the foolishness and fratricide of war. In its rich tapestry of scenes and characters, it encompasses the whole range of human emotions and behaviors, from the most savagely cruel to the most selflessly compassionate.

Set on the eve of World War I, Birds Without Wings tells the story of Eskibahçe, a charming and vibrant ethnically mixed town in present-day Turkey, and how it is irrevocably changed by the ravages of nationalism, war, and religious fervor. Before the war, Eskibahçe is filled with a wild assortment of characters, Christian and Muslim, Turkish and Armenian, the mad and the sane, the rich and the poor, living side by side in remarkable harmony. There is Ali the Snowbringer, who lives with his family and his donkey inside a hollowed-out tree; Iskander the Potter, who supplies the town with proverbial wisdom along with his pots; Karatavuk—Iskander’s son—and Mehmetçik, whose deep friendship reaches across religious barriers; Father Kristoforos and Abdulhamid Hodja, priest and imam, who hail each other playfully as “infidels”; Rustem Bey, the landlord and protector of the town, who finds happiness with a Circassian mistress after his wife is nearly stoned to death for adultery. There are lunatics as well—a crazy Sufi known as “the Dog,” who lives in a tomb and terrifies everyone with his smile, and a man known as “the Blasphemer,” who flies into cursing fits at the sight of any holy man. There is Philothei, a girl of such disquieting beauty that she must be veiled, and her besotted lover, Ibrahim the Goatherd, who will be driven mad by the horrors of war. And there is Mustafa Kemal, whose military daring will lead him to many stunning victories against the invading Western European forces and to a reshaping of the whole region. What happens to these characters—and their beloved town—because of the war is the great tragedy that Birds Without Wings describes with such unforgettable vividness.

1. Why has Louis de Bernières chosen Birds Without Wings as his title? What actual and symbolic roles do birds play in the book? What does Karatavuk mean when he writes at the end of the novel, “We were birds without wings. . . . Because we cannot fly we are condemned to do things that do not agree with us” [p. 550–551]?

2. The setting of Birds Without Wings is an early twentieth-century Turkish village. How, despite its distant setting, does the novel mirror the contemporary world? In what way is the world of the novel vastly different from the world today?

3. In his prologue, Iskander the Potter says that he misses the Christians after they were removed from Eskibahçe: “Without them our life has less variety, and we are forgetting how to look at others and see ourselves” [p. 7]. Why does he feel that the presence of “others” allowed the villagers to see themselves? Why is the loss of variety so important? Why were so many different kinds of people able to live together in Eskibahçe so peacefully?

4. What makes Eskibahçe such a marvelously colorful village? Who are some of its most eccentric and engaging characters? How does the village change over the course of the novel?

5. The novel vividly describes the nationalist fervor that swept the world in the early twentieth century: “Serbia for the Serbs, Bulgaria for the Bulgarians, Greece for the Greeks, Turks and Jews out!” [p. 16] What causes these feelings? What are their ultimate consequences?

6. After Ayse and Polyxeni convince the reluctant Daskalos Leonidas to write a message in tears on the wings of a dove, which they hope will fly to Polyxeni’s dead mother, Ayse exclaims, “It’s incredible! A man with that much education, and he didn’t even know about how to get a message to the dead” [p. 77]. What does this scene suggest about the gulf between traditional and modern ways of understanding the world?

8. What kind of man is Mustafa Kemal? How does he achieve his great military success? What are the ultimate consequences of his actions?

9. Leyla tells Rustem Bey that the women in town are saying he is a bad master because he doesn’t beat her [p. 228]. What does this passage suggest about the relationship between women and men in the novel? What roles are women expected to play? In what ways are they oppressed by their culture?

10. What are the most horrific aspects of war as they are described in Birds Without Wings? What are its greatest cruelties? What surprising acts of compassion do the soldiers perform for one another and even for their enemies? How does war affect the village of Eskibahçe?

11. Why does de Bernières use different narrators and different points of view in the novel? Does this multiplicity of voices mirror some of the novel’s main themes?

12. What is the significance of the relationships between Philothei and Ibrahim and between Karatavuk and Mehmetçik? Why are these young people so drawn to each other despite their religious differences?

13. Can Birds Without Wings be read as a cautionary tale for our own times? What does the novel say about the larger themes of love and war, revenge and forgiveness, both toward oneself and others?