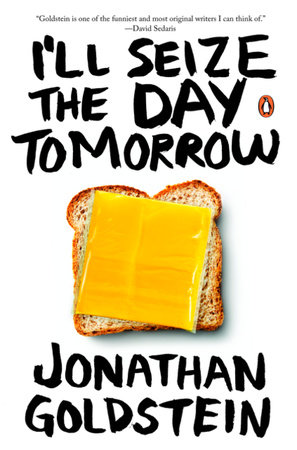 About I’ll Seize the Day Tomorrow

I’ll Seize the Day Tomorrow is the story of Jonathan Goldstein’s journey to find some great truth on his road to forty.

In a series of wonderfully funny stories, the host of CBC’s WireTap recounts the highs and lows of his last year in his thirties. Throughout the year, Goldstein asks weighty questions that would stump a person less seasoned. For example: What is it about a McRib that drives people crazy? Can we replace extending an olive leaf with extending an olive jar? How much wisdom can we glean from episodes of Welcome Back, Kotter? His friends and family, many of them known through their appearances on WireTap, weigh in with hilarious results as Goldstein eats, sleeps, and watches bad TV all the way to his date with destiny. 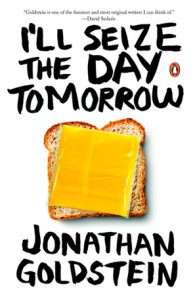 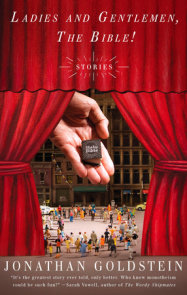 See all books by Jonathan Goldstein

“Jonathan Goldstein is one of today’s most original and intelligent comic voices. He has done for radio what Larry David has done for television. And in his new book he proves, once again, that his wry, self-deprecating observations work just as well on the page.” – David Bezmozgis, author of Natasha and Other Stories and The Free World

“Jonathan Goldstein has created something uniquely funny, smart, and touching. I love this book.” – Neil Pasricha, author of The New York Times bestseller The Book of Awesome

“Surrounded by [Goldstein’s] cast of family and friends, this chronicle of his 39th year is a portrait of a life that is striving towards hope and beauty—even wisdom—against the relentless pull of the gravity that is one’s own character, and the entropy that is age … I smiled or laughed at every page.” – Sheila Heti, author of How Should a Person Be?

“One of the funniest books I’ve read in a long time. Jonathan is like a mix of Louis C.K., Jean-Paul Sartre, and Sholem Aleichem. I guess what I’m trying to say is that he’s hilarious, philosophical, and Jewish. I want to be Jonathan Goldstein when I turn 40. (Note: I’m 44, but you know what I mean).” – A.J. Jacobs, author of the The New York Times bestseller The Year of Living Biblically

“Jonathan Goldstein’s existential misery makes for good reading. As long as he keeps writing such funny and original pieces about it, I hope he continues to suffer.” – Shalom Auslander, author of Foreskin’s Lament

“I’ll Seize the Day Tomorrow is packed with Goldstein’s trademark combo of sharp-edged wit and tender wisdom. It’s his funniest book yet!” – Miriam Toews, author of A Complicated Kindness

“With his brilliant deadpan and his all-seeing eye, the hilarious Jonathan Goldstein traffics in what he calls ‘moderate hopefulness.’ It fills me with wild optimism.” – Henry Alford, author of Would It Kill You To Stop Doing That?

“Jonathan Goldstein is like no one else. He’s constantly surprising, simultaneously poetic and hilarious; an honest-to-goodness artist.” – David Rakoff, bestselling author of Don’t Get Too Comfortable

“Jonathan Goldstein is one of the funniest and most original writers I can think of. Anything by him is better than anything by just about anyone else.” – David Sedaris,author of the New York Times bestseller Me Talk Pretty One Day

“Move over, Woody Allen. Make way for Jonathan Goldstein. New misery. New hilarity…. I’ll Seize the Day Tomorrow, should raise him to the upper strata of the humour pantheon…. He brings self-deprecation to a whole other level. And he should leave most howling…. Goldstein melds the Everyman hysteria of Louis C.K. with the existentialism of Sartre and converts it into a melancholic comic form that’s almost impossible to resist.” – The Gazette (Montreal)