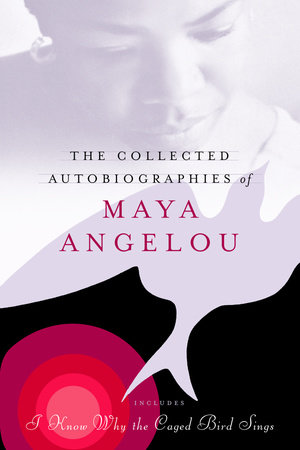 Memoirist, novelist, poet, and dramatist, Maya Angelou is one of the best-loved writers of our time.  She is widely acclaimed for her searing, inspiring writings–and she has been praised for confronting both the racial and sexual pressures on black women, and for infusing her work with a perspective on larger social and political movements, including civil rights.


In the volumes of her bestselling personal story–one of the most remarkable narratives ever shared–Maya Angelou writes about the struggles and triumphs of her extraordinary life with candor, humor, poignancy, and grace. These include:


I Know Why the Caged Bird Sings

The classic autobiography of her young years.


Gather Together In My Name

The coming-of-age story of her struggle for survival as a young unwed mother.

The saga of her show business career, her failed marriage, and her early motherhood.


The Heart of a Woman

The turbulent story of her emergence as a writer and a political activist.


Wouldn’t Take Nothing For My Journey Now

Her exhilarating collection of wisdom, spirituality, and life lessons.

1. The memoir opens with a provocative refrain: "What you looking at me for? I didn’t come to stay … "

What do you think this passage says about Ritie’s sense of herself? How does she feel about her place in the world? How does she keep her identity intact?

3. The author writes, "If growing up is painful for the Southern Black girl, being aware of her displacement is the rust on the razor that threatens the throat." What do you make of the author’s portrayal of race? How do Ritie and her family cope with the racial tension that permeates their lives?

4. Throughout the book, Ritie struggles with feelings that she is "bad" and "sinful," as her thoughts echo the admonitions of her strict religious upbringing. What does she learn at the end of the memoir about right and wrong?

5. What is the significance of the title as it relates to Ritie’s self-imposed muteness?

On April 4, 1928, Maya Angelou was born Marguerita Johnson in St. Louis, Missouri. Her parents soon divorced and she was sent to live with her grandmother in rural Arkansas, where she spent most of her early childhood. During a visit to St. Louis when she was eight years old, Angelou was raped by her mother’s boyfriend, whom her uncles subsequently killed. Angelou did not speak for some years after.

In 1940, Angelou moved to San Francisco with her mother. While attending high school, she became pregnant and gave birth to a son in 1945, just after receiving her diploma. To support her child and herself, she worked several odd jobs. While appearing as a dancer in a cabaret, she changed her name to Angelou. Her experience there led to an acting and singing career and she joined a cast performing "Porgy and Bess" throughout Europe.

When she was thirty, Angelou moved to New York and joined the Harlem Writers Guild, where she met James Baldwin. She became involved in the civil rights movement, serving as the northern coordinator for Martin Luther King, Jr.’s Southern Christian Leadership Conference from 1959 to 1960. She later moved to Egypt, where she edited an English-language newspaper, and then to Ghana, working as a writer and editor.

In 1970, Angelou published I Know Why the Caged Bird Sings. An account of her childhood up to the birth of her son, it is her most critically-acclaimed work and was nominated for a National Book Award. She went on to write Gather Together in My Name, Singin’ and Swingin’ and Gettin’ Merry Like Christmas, The Heart of a Woman, and Wouldn’t Take Nothing for My Journey Now. Her acclaimed works of poetry include Maya Angelou: Poems and I Shall Not Be Moved.

In film and television, Angelou wrote the original screenplay and musical score for the film "Georgia, Georgia," and wrote and produced a ten-part television series on African traditions in American life, and participated as guest interviewer for the Public Broadcasting System program "Assignment America." One of the few women members of the Directors Guild, she is the author of the television screenplays I Know Why the Caged Bird Sings and The Sisters.

In January 1993, Maya Angelou became the first woman and the first African-American to read her work at a presidential inauguration. Her inaugural poem "On the Pulse of the Morning" celebrates the diversity of the American and world communities and calls on them to work together to create a better future. She currently lives in Winston-Salem, North Carolina, where she is Reynolds Professor at Wake Forest University.


From the Paperback edition.
Learn More About The Collected Autobiographies of Maya Angelou
print

A Song Flung Up to Heaven

Gather Together in My Name

I, Asimov
Back to Top