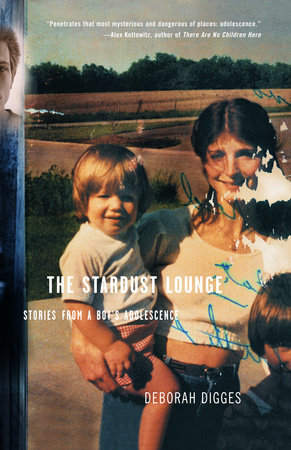 “Penetrates that most mysterious and dangerous of places: adolescence.” —Alex Kotlowitz, author of There Are No Children Here

The introduction, discussion questions, suggested reading list, and author biography that follow are intended to enhance your group’s reading of Deborah Digges’s The Stardust Lounge, a mother’s story of her son’s harrowing adolescence and of how she and her son forged the extraordinary bond that helped them survive their difficulties.

At thirteen, Deborah Digges’s son Stephen was an angry, troubled boy who went roaming after midnight with gangs, tagging buildings with spray paint, and stealing cars–including his mother’s. He had always been a restless, intelligent child, but he was growing up quickly and aggressively, with unrestrainable energy and a flair for risky and outrageous behavior. He refused to speak with his mother or to eat at the same table with her. Caught carrying a gun, he was expelled from the private school his mother could barely afford. Digges’s husband left her, unable to cope with this impossible child from his wife’s previous marriage.

In beautiful, vibrant prose–devoid of self-pity, anger, or blame–Digges describes her struggle to understand and protect her son as his behavior escalated beyond her control. Noting that Stephen still connected profoundly to their dog G. Q., however alienated from the people in his life, Digges took a risk. She adopted another bulldog, this one seriously ill with epilepsy. Buster needed medication several times a day to prevent seizures, and Stephen would have to help care for him. Stephen rose to the challenge, becoming much more empathetic and responsible in the process. At about the same time, Stephen asked his mother to take in a homeless friend, Trevor, a sixteen-year-old boy who had spent a year in a juvenile detention facility. Soon, Digges became Trevor’s foster mother. The household was often chaotic with three dogs, two teenage boys, assorted cats, and a devoted single mother trying to balance parenthood with her teaching job.

This is the story of an unusual family who realizes how vitally they are tied to each other and to their animals. It is an inspiring and eye-opening memoir, a journey narrated by a mother who refused to give up on her son. At times touching, at times terrifying, The Stardust Lounge is a fiercely engaging, uniquely insightful, and inspiring portrait of male adolescence in our complicated world.

1. In the prologue, why does Digges use the meeting with the parapsychologist at the laundromat to foreshadow the troubles with her son? Is it a fitting introduction to the mysteries of Stephen’s temperament and behavior?

2. Digges writes of her own sense of “fear and failure” in thinking about the way she has raised her sons: “I have been a snob, a bohemian snob who believed that the arts, music, poetry were religion enough . . . and that somehow, above all the groups in culture–rich and poor alike–we were superior in our passionate pursuits” [pp. 9—10]. Why did this approach, which worked so well with her older son, not work with Stephen? What is Stephen looking for that he doesn’t find in the creative environment his mother has provided?

3. How do the comments and suggestions from Digges’s family and her husband Stan undermine her confidence in her skills as a mother? Does anyone make useful suggestions for dealing with Stephen? What insights finally allow Digges to help Stephen?

4. A drawing of guns that Stephen made at the age of five appears on page 30. What are the most remarkable aspects of this drawing and its accompanying text? How does Digges’s decision to include examples of Stephen’s work (the essay about his brother, his photographs, etc.) affect the reader’s understanding of her son? What effect does the presence of other material–lists, police logs, notes to teachers, etc.–have on the reader’s experience of this memoir?

5. What is the significance of the episode that takes place at the Stardust Lounge, described on pages 18—21 and 81—84? Why might Digges have chosen this for her title?

6. The cover photograph shows Digges as a beautiful young mother holding Stephen as a happy toddler. She describes the day on which this picture was taken, an outing with her mother and sisters to pick cherries at the family orchard [pp. 62—70]. Why is the memory of this day so significant? Years later she observes, “I am someone I never imagined, an isolated, bitter, defensive mother navigating by shame the deep waters of her son’s adolescence” [p. 70]. Does Digges imply that all parents feel responsible for their children’s unhappiness? Is her shame justified?

7. What do Stephen’s photographs throughout the book express about him and about the way he sees the world? What do the photographs of Stephen reveal about him?

8. What is psychologist Eduardo Bustamante’s role in Stephen and Deborah’s relationship? Does Bustamante seem right in thinking “that for some children, indeed for Stephen, adolescence is simply a nightmare, a terrible, seemingly unending nightmare. . . . He is paranoid, besieged, his hormones are raging” [p. 98]? What might have happened to Stephen if Bustamante hadn’t entered his life?

9. What effect does single parenthood have on Digges’s situation? How does her economic status exacerbate her difficulties? What gifts and strengths does she bring to her situation?

10. Jane Goodall’s In the Shadow of Man, about her work with chimpanzees, turns out to be crucial for Digges in her ideas about how to understand and help Stephen. What is striking about the passage on pages 94—95, about the gorilla named Mike? Does Digges suggest that it is sometimes useful for human beings to step back and think about themselves as animals, with animal instincts and impulses?

11. Deborah and Stan discuss a newspaper article about a father who chained his wayward teenage daughter to the stove so that she couldn’t escape the house to do drugs. Digges comments, “We are no longer surprised with ourselves for our mutual consent to behaviors such as the father’s, or of any parents we hear of whose desperate attempts at control are meant to keep their children from harm” [p. 76]. What happens when Digges realizes that she can’t control Stephen? How does this truth affect her sense of herself as a parent?

12. What part does Stephen play in the breakup of Deborah’s marriage to Stan? Does it matter that he is not Stan’s child? Was Stan right or wrong to leave? How does the book reveal the damage caused to an entire family when a child is in a constant state of crisis?

13. Describe Digges’s writing style and the way in which she organizes her book. What roles do memories and flashbacks play in her story? What point is she making by shifting so freely between the present and the past?

14. The bulldog Buster suffers from epilepsy, and his medication is life-saving; the other bulldog, G. Q., begins to exhibit violent behavior that is treated by behavioral therapy and Prozac [see pp. 158 and 163]. Is it surprising then that Digges never wonders whether Stephen’s behavior is generated by a biochemical imbalance? Is she right to avoid such diagnoses, and to stick with her own intuition that Stephen suffers from what she calls “detachment disorder” [p. 57], and that “grief makes Stephen want to hurt back” [p. 58]? She writes, “But what if Stephen could feel empathy for something again? Maybe through empathy, he might find his way” [p. 58]. How well does Buster function for Stephen as a way of learning empathy?

15. Given the fact that several lives were improved and perhaps saved (particularly Trevor’s) by Digges’s generous approach to adoption, does The Stardust Lounge attempt to change the way readers think about adoption? Does Digges attempt to bring about a shift in the way her readers think about the relationship between humans and animals, and about the benefits for families which include both?

16. What is most interesting about the way in which Deborah, Stephen, Trevor, and their animals work together in creating an alternative family? What do they learn from each other? What is most gratifying about the book’s ending?

Deborah Digges is the author of the memoir Fugitive Spring and three award-winning volumes of poetry. Her poetry appears regularly in The New Yorker and other publications. She lives in Massachusetts with her husband, Frank. Her son Stephen Digges graduated from the Parsons School of Design in 2000 and is now a photographer based in New York City.

How It Feels to Be Adopted
Jill Krementz

I’m Not the New Me
Wendy McClure

I Was a Child
Bruce Eric Kaplan

What I Thought I Knew
Alice Eve Cohen

The Camera My Mother Gave Me
Susanna Kaysen

A Spoonful of Sugar
Brenda Ashford
Back to Top