The Language of Secrets Reader’s Guide 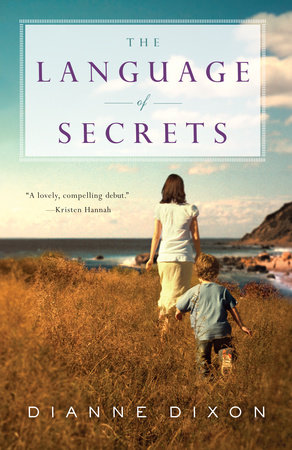 The Language of Secrets Reader’s Guide

The Language of Secrets by Dianne Dixon is a complex novel about family secrets and the many ways that love can cloud our judgment. The following questions are intended to enhance your reading experience and to generate lively discussion among the members of your book group.

From a fresh and exciting new voice in women’s fiction, The Language of Secrets unflinchingly examines the lifelong repercussions of a father’s betrayal.

Justin Fisher has a successful career as the manager of a luxury hotel, a lovely wife, and a charming young son. While all signs point to a bright future, Justin can no longer ignore the hole in his life left by his estranged family. When he finally gathers the courage to reconnect with his troubled past, Justin is devastated to learn that his parents have passed away. And a visit to the cemetery brings the greatest shock of all—next to the graves of his father and mother sits a smaller tombstone for a three-year-old boy: a boy named Thomas Justin Fisher.

What follows is an extraordinary journey as Justin struggles with issues of his own identity and pieces together the complex and heartbreaking truth about his family. With great skill and care, Dianne Dixon explores the toll that misunderstandings, blame, and resentment can take on a family. But it is the intimate details of family life—a mother’s lullaby for her son, a father’s tragic error in judgment—that make this novel so exceptional and an absolute must for reading groups everywhere.

The Language of Secrets is the story of an unspeakable loss born of human frailty and an ultimate redemption born of human courage.

1. The Language of Secrets opens with this quote from Thomas Moore: “The beast residing at the center of the labyrinth is also an angel.” How does this quote set the stage for what transpires in the novel? Why do you think the author chose it for the opening page?

2. What were your first impressions of Justin? What did you think might have happened between him and his family? Initially, did it seem unusual that he held onto memories of his childhood home so tightly?

3. Discuss Caroline. Do you believe that in spite of the fact Caroline was born in the1940s and came of age in a time long before the Women’s Movement, she truly had no options, no way to escape the oppressive aspects of her life? Why was she unable to alter her situation?

4. Caroline’s background and her passionate belief in the importance of a two-parent family was a key part of who she was. If she had at some point decided to get a divorce, what impact do you think it would have had on her as a woman, and as mother? Would she have been stronger? Or more damaged?

5. Along these lines, consider the theme of powerlessness: Which other characters believed that they were trapped by their circumstances? What do they do (or not do) to improve their respective lives?

6. Why do you think Robert could never truly love Justin? Do you think, on some level, that long before it was revealed, Robert had known the truth about Justin?

7. Barton and Mitch were very different men, but Caroline had feelings for both of them and the feelings lasted for a lifetime. What were the qualities in each man that attracted her to him? Who do you think Caroline truly loved–Mitch, Barton or Robert? Why?

8. Talk about the marriages in The Language of Secrets. Given the betrayal and tragedy that colored their union, was it surprising that Caroline and Robert remained married? Justin and Amy’s relationship starts out strong but is battered by the mystery of Justin’s boyhood and the interference of Amy’s overbearing father Don. In light of those things, did their marriage turn out the way you thought it would?

9. Consider how author Dianne Dixon constructed the narrative, by writing from the various characters’ perspectives and by allowing plot points to develop in a non-linear fashion. How would the novel have been different if only one character told the story from his or her point of view, or if the events unfolded in real time?

10. What do you think the book’s title means, both literally and in the context of what happens in the novel? Was the Fisher family unique, or do all families have their own, individual, language of secrets?

11. Discuss Robert’s bombshell revelation to Caroline about what really happened on the Nevada camping trip. What did you think about what Robert did to his son, his wife? Can his actions be explained or excused in any way?

12. Did you have empathy for Caroline, or for Robert? Or do you feel each of them got what they deserved? Do you think that in any way (big or small) Caroline was responsible for what Robert did to Justin?

13. What are some examples of the line between right and wrong being crossed in The Language of Secrets? Can doing the wrong thing (even if it’s for the right reasons) ever be justified?

14. After Margaret sees the spiral-bound notebook that Caroline assembled, Margaret intuitively understands the truth–there was a monumental difference in how each of Justin’s parents felt about him. If you were in Margaret’s shoes, once you discovered this important piece of information, what would you have done?

15. Even though he went to the Zelinski house intending to confess, why didn’t Justin reveal the details of what happened on his final night in that house? Given Justin’s quest to banish the secrets in his own life, what does it say about his character that he would voluntarily keep the secrets that existed in Stan’s life?

17. When Julie and Lissa are leaving Lima Street for the last time, how do the impressions they have of their parents differ from the impressions you had of who Robert and Caroline were? Do you think it’s ever possible for a child to have an accurate understanding of a parent? Did Julie and Lissa’s conversation affect your perception of your own parents?

18. As Justin’s story unfolds, how did you feel about Amy’s attitude? Should she have been a more supportive and sympathetic wife? Or do you think she should have gone in the other direction and been more forceful in insisting that Justin let go of the past and focus on the family he has now?

19. Amy’s mother Linda tells Amy to accept her father the way he is. Do you agree with that point of view? Or is Amy right in expecting her father to step up and start showing his love in the ways that she wants and needs him to?

20. Of all the twists and turns in Justin’s story, which one surprised you the most?

Dianne Dixon is a screenwriter living in California who has twice been nominated for an Emmy, has won a Humanitas Prize for work done in television, and has been Visiting Professor of Creative Writing at Pitzer College, a member of the Claremont Colleges.

Necessary Errors
Back to Top