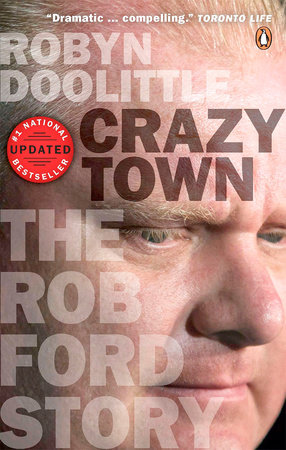 His drug and alcohol-fuelled antics made world headlines and engulfed a city in unprecedented controversy. Toronto Mayor Rob Ford’s personal and political troubles have occupied centre stage in North America’s fourth largest city since news broke that men involved in the drug trade were selling a videotape of Ford appearing to smoke crack cocaine.

Toronto Star reporter Robyn Doolittle was one of three journalists to view the video and report on its contents in May 2013. Her dogged pursuit of the story has uncovered disturbing details about the mayor’s past and embroiled the Toronto police, city councilors, and ordinary citizens in a raucous debate about the future of the city.

Even before those explosive events, Ford was a divisive figure. A populist and successful city councillor, he was an underdog to become mayor in 2010.  His politics and mercurial nature have split the amalgamated city in two. But there is far more to the story. The Fords have a long, unhappy history of substance abuse and criminal behavior. Despite their troubles, they are also one of the most ambitious families in Canada. Those close to the Fords say they often compare themselves to the Kennedys and believe they were born to lead. Regardless of whether the mayor survives the scandal, the Ford name is on the ballot in the mayoralty election of 2014.

Fast-paced and insightful, Crazy Town is a page-turning portrait of a troubled man, a formidable family and a city caught in an jaw-dropping scandal.

ROBYN DOOLITTLE is a Globe and Mail investigative journalist. Her reporting on Mayor Rob Ford for the Toronto Star made headlines around the world, won the Michener Award for public service journalism, and her number-one bestselling book on the topic,… More about Robyn Doolittle