Before I Die Reader’s Guide 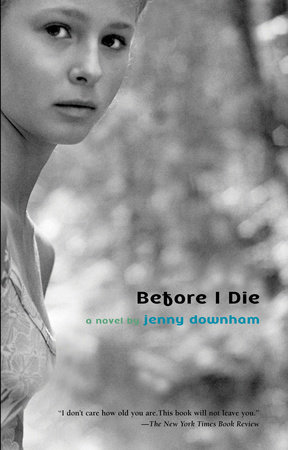 Before I Die Reader’s Guide

print
Before I Die Reader’s Guide

1. Describe Tessa’s relationship with her father. How has this relationship been shaped by Tessa’s illness? Debate whether Cal, Tessa’s younger brother, feels neglected by his father. Discuss Tessa’s relationship with her mother. Why did she leave home? When does Tessa miss her mother the most?
2. Discuss the true qualities of a friend. Which of these qualities best describes Tessa and Zoey’s friendship? What does Zoey offer Tessa that her father cannot give? Why does Tessa’s father call Zoey when Tessa won’t get out of bed? Cal hates Zoey. How does Tessa explain her friendship with Zoey to her little brother?
3. Tessa’s father is frustrated when she becomes withdrawn. He says, “If you won’t talk about it, how can I help?” (p. 2) How does this withdrawal represent the first stage of grief? Why is talking about feelings always better than keeping them to yourself?
4. Discuss why Tessa doesn’t want to return to school. She says that Zoey is the only person at school that isn’t afraid of her illness. Explain how difficult it is for teenagers to deal with the terminal illness of a classmate. What might Zoey say to other students that would help them know how to interact with Tessa?
5. Tessa writes her private thoughts on the wall beside her bed. Why does she let Zoey read what she has written?
6. Zoey tells Tessa that it’s all right to be afraid. How does Tessa reveal her fear? How does she use her hat to hide her fear? Discuss how Cal, Adam and Tessa’s father express their fear.
7. How is Tessa’s list a form of bargaining and acceptance? At what point in the novel does Tessa accept the fact that she is dying? Explain how her list helps her “get on with living.” Which item on her list is the most dangerous? Why does doing illegal things like shoplifting and driving without a license give Tessa a thrill?
8. Tessa’s father wants to know the things on her list. He says, “I need to know about it, not because I want to stop you, but because I want to keep you safe.” (p. 80) Discuss how Tessa reacts to her father when he asks to see the list.
9. Discuss the conversation between Tessa and her father after she is caught shoplifting. Why does he think anger is taking her over?
10. How is Tessa’s list confusing to her father? Explain how Tessa’s list is self-centered. Her mum tells her, “You have to think about the people who love you.” (p. 170) At what point does Tessa begin to think about Cal and her father? Explain why Tessa’s mother speaks in past tense when she says, “we loved you.” Why is it unrealistic for Tessa to think that she can rekindle her parents’ relationship?
11. Why do you think sex is number one on Tessa’s list of things she wants to do before she dies? Tessa worries about being a “slag” if she has sex with someone that she doesn’t know. Explain Zoey’s reaction to Tessa’s thoughts.
12. Tessa says that walking up the stairs behind a boy she doesn’t know reminds her of hospital corridors. What do the stairs and the corridors symbolize?
13. Discuss the moments in the novel that Tessa is most depressed. Who helps her deal with her depression?
14. Why does Zoey suspect that Tessa is in love with Adam? What does Zoey mean when she says, “I thought you understood the rules! Never let a bloke into your heart–it’s fatal”? (p. 88) Why is Adam different than Zoey? Discuss what Adam means when he says, “I can’t give you what you want.” (p. 117) What does he ultimately give her? What does she offer him?
15. Tessa asks the home health care nurse if she believes in God. What is the significance of this inquiry? Tessa tells the nurse that she doesn’t believe in heaven. Discuss the nurse’s reaction to Tessa’s confession. Why does the nurse think a support group might be helpful to Tessa? How does Tessa’s list take the place of a support group?
16. How does Tessa’s dad react when he finds out Zoey wants to terminate her pregnancy? Discuss how his opinion is related to Tessa’s terminal illness.
17. Sorrow, loneliness, anxiety, and guilt are emotions associated with grief. How does each of the characters in the novel deal with these emotions?

Seventeen-year-old Tessa struggles to work through a list of things she wants to do before she dies as her battle with leukemia comes to an end.

Seventeen-year-old Tessa was diagnosed with acute lymphoblastic leukemia when she was 12. That was the same year that her mother left home. Now, Tessa is in the finally stages of her illness, and there are a list of things that she wants to do before she dies. This list confuses her father, who has quit his job to take care of her, but he ultimately understands that the list helps her focus on life rather than death. Zoey, Tessa’s best friend, is by her side as she moves down the list. There are many symbolic relationships and events that help Tessa face her untimely death. Among them are Adam, a neighbor who is dealing with his own loss, but gives Tessa the romance that she is seeking; her mother’s brief reappearance in her life; and, a return to a favorite family vacation spot.

BEFORE READING THE BOOK
Discuss the five stages of grief: denial and isolation, anger, bargaining, depression, and acceptance. Write a letter from the point of view of a dying person that expresses one of these stages of grief.

Jenny Downham trained as an actor and worked in alternative theatre before starting to write. She lives in London.
Learn More About Before I Die
print

I Have Lost My Way

How They Met and Other Stories

And We Stay
Back to Top