The Game of Kings Reader’s Guide 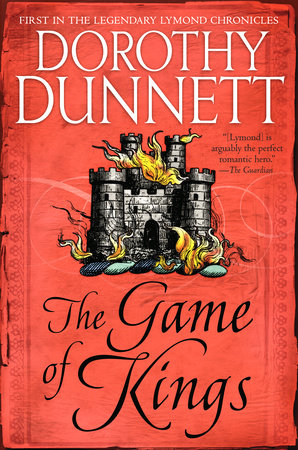 The Game of Kings Reader’s Guide

The questions, discussion topics, book descriptions, and author biography are designed to enhance your group’s reading and discussion of Dorothy Dunnett’s six bestselling novels in the Lymond Chronicles. We hope they will enrich your experience of these imaginative and adventuresome works of historical fiction.

1. The Game of Kings is the first of six books in the Lymond series based on the imagery of chess. Who would you say are the gamesters in this novel? Do the kings “play” the game or are they pieces in the game? Given the way suspense is created and information hidden, how is the novelist at some level engaged in a chess game with the reader?

2. The brothers Francis Crawford of Lymond and Richard Crawford of Culter appear to be rivals in every field: love, war, politics, family. Which scenes make you feel you’ve seen the heart of this relationship? Has Dorothy Dunnett managed to create in Richard a character with a fullness of his own, aside from his function as “foil” to Lymond? Is Richard as “romantic” a character as his brother? More romantic?

3. Lymond’s Spanish disguise at Hume Castle is only the most theatrical and public of the flamboyant hero’s many masquerades; what are some of the others? Besides the multiple political or military purposes, what do you think are some of the deeper psychological reasons for Lymond’s brilliance at, or even addiction to, “acting”?

4. Lymond likens sixteenth-century Scotland to a wren caught between crocodiles. How do the character and choices of Wat Scott of Buccleuch mirror, and affect, what’s happening in Scotland? What about Andrew Hunter of Ballaggan? Would you call Agnes Herries, later Maxwell, such a “wren”?

5. Perhaps the most poignant relationship in the novel is that between the protagonist, Lymond, and young Will Scott, the heir to the lordship of Buccleuch. What are some of the lessons Will must learn during his “apprenticeship” with Lymond?

6. Startlingly enough, in the course of this novel the glamorous and dangerous protagonist has no lovers and no sex, delivers only one kiss, and ends up in the embrace of his mother. What are some of the ironies here? What does the romantic triangle created between Richard Crawford, his wife Mariotta, and Francis Crawford seem to be saying about “romance”? About love?

7. Why does Lymond put himself in the hands of his enemies to redeem Christian Stewart, held hostage in England? How is this relationship, as Lymond says, “made possible” by her blindness? How does the blind girl help the reader more truly “see” Lymond?

8. The scene at the climax of the novel cuts back and forth between a legal hearing and a game of tarot cards–a game associated with the mystic, occult, and fateful. How do the contesting parties in the legal game and in the card game mirror one another? What might Dorothy Dunnett be suggesting by this pairing of the legal and the occult worlds?

9. A good popular novel should, arguably, have some strong villains: Who qualifies for this role in The Game of Kings? Is it easy to distinguish treason from patriotism–or patriotism from egoism–in the world of the novel?

Learn More About The Game of Kings
print

The Princes of Ireland
Edward Rutherfurd

The Rebels of Ireland
Edward Rutherfurd

The Passion of Artemisia
Susan Vreeland

Russka
Edward Rutherfurd
Back to Top