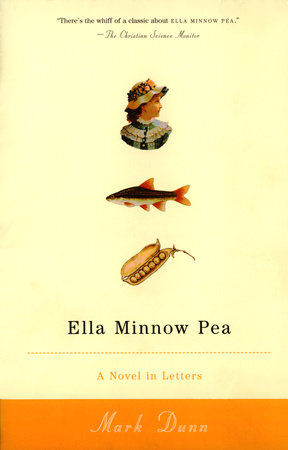 “There’s the whiff of a classic about Ella Minnow Pea.” –The Christian Science Monitor

The introduction, discussion questions, author biography, and suggested reading list that follow are designed to enhance your group’s reading of Mark Dunn’s Ella Minnow Pea. We hope they will offer you fruitful ways of thinking and talking about the novel that Publishers Weekly called “a whimsical fable, in which Dunn brilliantly demonstrates his ability to delight and captivate.”

In Ella Minnow Pea, Mark Dunn transports readers to the imaginary island of Nollop, named for Nevin Nollop, inventor of the pangram (a sentence using all letters of the alphabet) “The quick brown fox jumps over the lazy dog.” It is an idyllic place, free from technological innovations like television and computers, where Nollopians devote themselves to the liberal arts and especially to the cultivation of language. But when a tile containing the letter “Z” falls from the monument the islanders have erected to honor Nollop and his illustrious sentence, a chain of events is set in motion which will threaten the very foundations of the Nollopian state. The High Island Council calls an emergency session to discuss the fallen letter and in it they see a sign and portent, a message from the great Nollop himself to cease all use of the letter “Z” in spoken and written communication. The Council passes a law against uttering words containing the letter; punishment for violating their strictures can lead to banishment and even death. And as further letters begin to fall, Ella Minnow Pea and her family, along with the rest of community, are forced to live under linguistic siege. Books are destroyed. Newspapers shut down. Citizens are publicly flogged, placed in stocks, their property confiscated and their lives ruined, all for slips of the tongue. But with the help of Nate Warren, a researcher living in South Carolina, the islanders decide to fight back, vowing to create a pangram even shorter and therefore more dazzling than the one for which Nollop has been elevated to divine status. The only question is: can they do it before all is lost?

Charming, intellectually engaging, and filled with fascinating wordplay, Ella Minnow Pea is a cautionary tale about authoritarianism, about the dangers of reading signs and symbols where there are none–and about the irrepressible human urge to speak freely.

1. In what ways is Ella Minnow Pea unconventional? How is it more like a fable than a novel? What characteristics does it share with other fables? Does it offer a clear moral?

2. Why has Mark Dunn chosen to tell this story through letters rather than a more straightforward narrative? What does Dunn gain by eschewing a single narrative voice in favor of many characters writing to one another about the events that beset their island-nation? What ironies are involved in writing letters about the disappearance of the letters of the alphabet?

3. In response to the first proclamation proscribing the use of the letter “Z,” Tassie warns, “it stands to rob us of the freedom to communicate without any manner of fetter or harness” [p. 10]. In what sense can Ella Minnow Pea be read as a satire of censorship and the restriction of free speech?

4. All the inhabitants of Nollop are forced into linguistic contortions to avoid being prosecuted by the High Council, substituting words like “cephalus” for “head” and “sub-terra” for “underground” [p. 99]. What are some of the other more amusing verbal acrobatics they are forced to perform?

5. Nate Warren suggests that Nollop was a “charlatan” and a “con man” and that the pangram–“The quick brown fox jumps over the lazy dog”–responsible for his divine status may have been stolen from someone else. What is Dunn suggesting here about the ways in which human societies venerate and mythologize sacred texts and heroic ancestors?

6. What strategies do the islanders use to protest, oppose, and finally overthrow the tyranny of the High Council? How do these strategies create suspense in the novel?

7. When council representatives come to confiscate Rory Cummel’s property, they tell him they are only doing the will of Nollop and that “There is no other Supreme Being but Nollop” [p. 121]. Seen in light of recent events, in the Middle East and elsewhere, can the novel be read as a commentary on religious authoritarianism? What does the novel suggest about the dangers of humans assuming they know God’s will with absolute certainty?

8. Ella Minnow Pea dwells heavily on the theme of communication–reading, writing, and talking. What is Dunn suggesting by having the members of the High Island Council read the falling letters as signs–supernatural communications from Nollop–which ultimately make communication nearly impossible? What does the novel as whole say about the nature and purpose of communication and community?

9. How important are the love relationships in the novel–for example those between Tassie and Nate and between Rory and Mittie–to the main action? How do they enhance the plot?

10. Tassie writes that she longs to “live across the channel. . . . With telephones that actually work, and television and computers and books–all the books one could ever hope to read” [p. 32]. What does the novel imply about the dangers of trying to create a utopian society? What examples of intolerant societies–religious or otherwise–exist in the world today? Is the message of this novel relevant to those situations?

11. What is the significance of Amos Minnow Pea writing, quite by accident, a sentence which surpasses Nollop’s illustrious pangram? In what way does this undermine the divine value that the high council attributes to Nollop’s sentence?

12. At the end of the novel, Ella suggests a memorial to those who suffered from the High Council’s tyranny: “a large box filled with sixty moonshine jugs–piled high, toppling over, corks popping, liquor flowing. Disorder to match the clutter and chaos of our marvelous language. Words upon words, piled high, toppling over, thoughts popping, correspondence and conversation overflowing” [p. 206]. Why is this an appropriate memorial? In what ways is language chaotic? In what ways is it ordered and restrictive? Why is Ella comparing liquor and conversation in this passage?

13. How does Dunn manage to make Ella Minnow Pea both a whimsical fable and a serious anti-authoritarian satire? What elements of the novel seem comical or lighthearted? What elements seem more pointed? How well does the author integrate them into the story?

Mark Dunn is the author of more than twenty-five full-length plays, including the widely produced Belles and Five Tellers Dancing in the Rain. He has received several national playwriting awards and is currently playwright-in-residence with the New Jersey Repertory Company and the Community Theatre League in Williamsport, Pennsylvania. Ella Minnow Pea is his first novel.

We Ride Upon Sticks

The Rules of Attraction