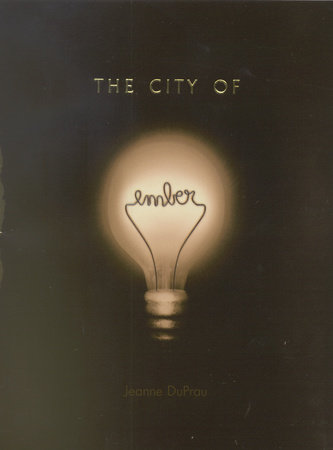 The City of Ember is the only light in the dark world. Beyond Ember, the darkness goes on forever in all directions. When the children of the city of Ember finish school, they begin work at 12 years of age. . . .

Lina Mayfleet desperately wants to be a messenger. Messengers spend their days outside, running from one corner of the city to the other. Instead, she draws the dreaded job of Pipeworks laborer, which means she’ll be stuck in tunnels deep underground.

Doon Harrow draws messenger—and asks to trade with Lina! Doon wants to be underground. That’s where the generator is, and Doon has ideas about how to fix it. For as long as anyone can remember, the great lights of Ember have kept the endless darkness that surrounds the city at bay. But now the lights are starting to flicker.

When Lina finds fragments of an ancient parchment, she and Doon put the pieces together to discover a message that seems to be directions out of the city.

1. Doon and Lina like very different things. Doon wants to work in the Pipeworks; Lina yearns to be a messenger. Doon likes to study how things work. Lina likes to run and explore. But their friendship grows because they are ultimately searching for the same thing. How do they complement one another and help one another develop through the novel?

2. Earth today has many environmental and social issues. What sort of problems could have led to the building of the City of Ember?

3. Clary tells Lina, “Everyone has some darkness inside.” (p. 168) Light and color both play very key roles in the novel. In what ways, other than the failing street lamps, are color and light important?

4. The possibility of never-ending darkness changes many of Lina’s friends and many of the townspeople. She discovers that her friend Lizzie has begun to accept things from Looper, who is stealing things from the storerooms. Why does Lina turn down the gifts that Lizzie offers her? Do you think that she was right to do so?

5. The city of Ember was built when people were worried that the human race might not survive. Do you think this was a good plan?

6. The mayor is the most corrupt character in the novel. He squelches the thirst for knowledge and limits freedom, yet the majority of the townspeople just accept his behavior. Why do you think they act this way? What other actions might they have taken?

7. People react in various ways when they feel threatened. How do the people of Ember react to danger? Have you seen people reacting to danger in these ways? How are Poppy’s actions important to the plot?

8. At the end of the novel, Lina, Doon, and Poppy have discovered a sunlit earth. What do you think will become of them in the sequel? Do you think that there are other people on the surface?

Jeanne DuPrau has been a teacher, an editor, and a technical writer. The City of Ember is her first novel. She is currently working on the sequel at her home in Menlo Park, California, where she keeps a big garden and a small dog.


From the Hardcover edition.
Learn More About The City of Ember
print
Back to Top