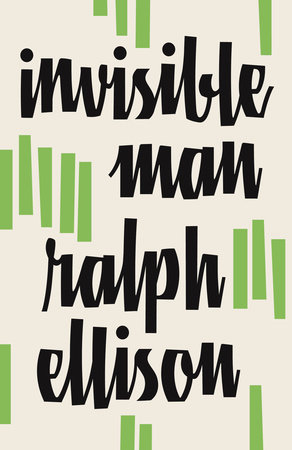 The questions, topics, and author biography that follow are designed to enhance your group’s reading and discussion of Ralph Ellison’s Invisible Man. We hope that they will provide you with new ways of looking at–and talking about–a book that is widely acknowledged as one of the greatest American novels of the second half of this century.

From the moment of its publication in 1952, Invisible Man  generated the impact of a cultural tidal wave. Here was a pioneering work of African-American fiction that addressed not only the social, but the psychic and metaphysical, components of racism: the nvisibility of a large portion of this country’s populace and the origins of that invisibility in one people’s willed blindness and another’s habit of self-concealment.

But Ellison had created far more than a commentary on race. He had attempted to decipher the cruel and beautiful paradox that is America, a country founded on high ideals and cold-blooded betrayals. And he sent his naive hero plunging through almost every stratum of this divided society, from an ivy-covered college in the deep South to the streets of Harlem, from a sharecropper’s shack to the floor of a hellish paint factory, from a millionaire’s cocktail party to a communist rally, from church jubilees to street riots. Along the way, Ellison’s narrator encounters the full range of strategies that African-Americans have used in their struggle for survival and dignity–as well as all the scams, alibis, and naked brutalities that whites have used to keep them in their place.

In his prose, Ellison managed to encompass the entirety of the American language–black and white, high-brow and low-down, musical, religious, and jivey–and reshape it to his own ends. In Invisible Man he created one of those rare works that is a world unto itself, a book that illuminates our own in ways that are at once hilarious and devastating.

1. What makes Ellison’s narrator invisible? What is the relationship between his invisibility and other people’s blindness–both involuntary and willful? Is the protagonist’s invisibility due solely to his skin color? Is it only the novel’s white characters who refuse to see him?

2. One drawback of invisibility is that "you ache with the need to convince yourself that you do exist in the real world" [p. 4]. How does the narrator try to prove that he exists? Does this sentence provide a clue to the behavior of other characters in the book?

3. What are the narrator’s dreams and goals? How are these variously fulfilled or thwarted in the course of the book?

4. Is the reader meant to identify with the narrator? To sympathize with him? How do you think Ellison himself sees his protagonist?

5. What is the significance of the grandfather’s deathbed speech [p.16]? Whom or what has he betrayed? What other characters in this book resort to the same strategy of smiling betrayal?

6. Throughout the novel the narrator gives speeches, or tries to give them, to audiences both black and white, at venues that range from a whites-only "smoker" to the funeral of a black street vendor murdered by the police. What role does oratory–and, more broadly, the spoken word–play in Invisible Man?

7. The "battle royal" sequence portrays black men fighting each other for the entertainment of whites. Does Ellison ever portray similar combats between blacks and whites? To what end?

8. Throughout the book the narrator encounters a number of white benefactors, including a millionaire college trustee, an amiable playboy, and the professional agitator Brother Jack. What does the outcome of these relationships suggest about the possibility of friendship or cooperation between the races?

9. What black men does the protagonist choose as mentors or role models? Do they prove to be any more trustworthy than his white "benefactors"? What about those figures whose authority and advice the narrator rejects–for example, the vet in The Golden Day and the separatist Ras the Exhorter? What characters in Invisible Man, if any, represent sources of moral authority and stability?

10. What cultural tendencies or phenomena does Ellison hold up for satire in this novel? For example, what were the real-life models for the Founder, the Brotherhood, and Ras the Exhorter? How does the author convey the failures and shortcomings of these people and movements?

11. Why might Tod Clifton have left the Brotherhood to peddle demeaning dancing Sambo dolls? What does the narrator mean when he says: "It was as though he [Clifton] had chosen…to fall outside of history"? How would you describe Ellison’s vision of history and the role that African-Americans play within it?

12. Invisible Man may be said to exemplify the paranoid style of American literature. How does Ellison establish an atmosphere of paranoia in his novel, as though the reader, along with the narrator, "had waded out into a shallow pool only to have the bottom drop out and the water close over my head" [p.432]? Why is this style particularly appropriate to Ellison’s subject matter?

13. Where in Invisible Man does Ellison–who was trained as a musician–use language to musical effect? (For example, compare the description of the college campus on pages 34-7 to Trueblood’s confession on 51-68, to the chapel scene on 110-135, and Tod Clifton’s funeral on 450-461.) What different sorts of language does Ellison employ in these and other passages? How does the "music" of these sections–their rhythm, assonance, and alliteration–heighten their meaning or play against it?

14. More than forty years after it was first published, Invisible Man is still one of the most widely read and widely taught books in the African-American literary canon. Why do you think this is so? How true is this novel to the lives of black Americans in the 1990s?

15. In spite of its vast success (or perhaps because of it), Ellison’s novel–and the author himself–were fiercely criticized in some circles for being insufficiently "Afrocentric." Do you think this is true? Do you think Ellison made artistic compromises in order to make Invisible Man accessible to white readers?

Ralph Ellison was born in 1914 in Oklahoma City, the son of Lewis Ellison, a construction worker, and his wife, Ida, a domestic. He was introduced to literature by his mother, who used to bring him books she borrowed from the homes she cleaned. A further exposure was provided by the ironies of segregation: in the 1920s, Oklahoma City had no black library, and books from the library’s main branch were shelved haphazardly in a pool hall, where the young Ralph might find a volume of fairy tales alongside one of Freud–with no well-meaning librarian telling him what a child ought or ought not to be reading.

Ellison attended Alabama’s Tuskegee Institute on a music scholarship, but in 1936 he moved to New York City, where he began writing short stories while supporting himself as a free-lance photographer and audio engineer. After serving in the Merchant Marine during World War II, he spent seven years writing Invisible Man, working out of an office located at the back of a jewelry store on Fifth Avenue. The book was published in 1952 and was awarded the National Book Award. It has been translated into seventeen languages.

The manuscript of Ellison’s second novel was destroyed by a fire in 1967. He spent the remaining years of his life painstakingly reconstructing it, while publishing two volumes of nonfiction, Shadow and Act (1964) and Going to the Territory (1986). He taught and lectured widely, was appointed to the American Academy of Arts and Letters, served on the National Council on the Arts and Humanities and the Carnegie Commission on public television, and was a trustee of the John F. Kennedy Center for the Performing Arts. Ralph Ellison died of cancer on April 16, 1994, at his home in New York City.
Learn More About Invisible Man
print

The Master and Margarita

Passing
Back to Top