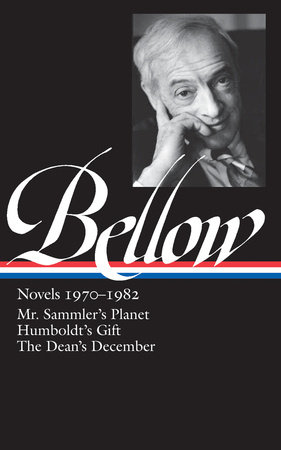 The third volume of The Library of America edition of Saul Bellow’s complete novels collects three essential works: Mr. Sammler’s Planet (1970), Humboldt’s Gift (1975), and The Dean’s December (1982). These novels, written in the period of Bellow’s greatest literary and popular acclaim—he was awarded the Nobel Prize in Literature in 1976—are unsparing yet humane, and range widely in their philosophical and cultural concerns. They offer the indispensable voice of a great American raconteur and thinker.

In Mr. Sammler’s Planet, the anarchic forces of late-1960s America are set loose on Artur Sammler, a highly cultured septuagenarian and European émigré who seeks “with God, to be free from the bondage of the ordinary and the finite.” A Holocaust survivor living out his latter days in Manhattan, Sammler endures the city’s everyday barbarism, as shocking as it is casual, and must contend with absurd complications when a manuscript goes missing.

Humboldt’s Gift depicts the deep and troubled friendship between the tormented poet Von Humboldt Fleisher and the renowned writer Charlie Citrine. Humboldt has died in squalid obscurity, but for Citrine the memory of their earlier days persists as counterpoint to a middle age studded with difficulties: a messy divorce, a demanding mistress, and the attentions of a Chicago hoodlum who claims that Charlie has cheated him. Writing of the book’s “rich and suggestive” narrative voice, Sven Birkerts observes, “There is a feeling when reading this novel that a tightly rolled sultan’s carpet has splashed open before our eyes.”

In The Dean’s December, Albert Corde experiences totalitarianism firsthand when he travels to Bucharest to visit his dying mother-in-law. As a college dean in Chicago he has attracted controversy through his journalism and his role in a racially charged murder trial. Alternating between Romanian and American settings, the novel is a profound indictment of official hypocrisy and corruption on both sides of the Iron Curtain.

Saul Bellow (1915-2005) was one of the most celebrated writers of the last century, the only author to win the National Book Award for Fiction three times. He was awarded the Nobel Prize for Literature in 1976.