I Feel Bad About My Neck Reader’s Guide 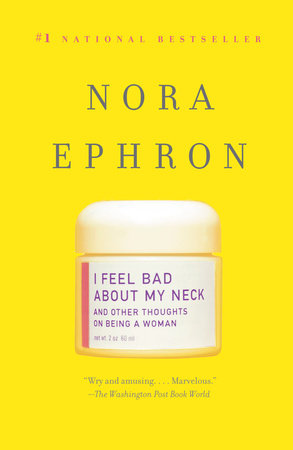 I Feel Bad About My Neck Reader’s Guide

print
I Feel Bad About My Neck Reader’s Guide

The introduction, discussion questions, and suggestions for further reading that follow are intended to enhance your group’s discussion of I Feel Bad About My Neck, Nora Ephron’s disarming, intimate, frank, and often hilarious essays about coping—or failing to cope—with growing older.

Nora Ephron feels bad about her neck, but she doesn’t want to have surgery, either. She worries that she’ll end up looking in the mirror and seeing someone unrecognizable who looks like a drum pad. She does try to stop the clock in other ways—the expensive face creams, the hair dye, the treadmill, the trainers. She has little faith in these methods, but can’t help trying to keep age at bay. In fact, it’s nearly a full-time job.

She also chronicles her life as an obsessed cook, passionate city dweller, and hapless parent. She recounts her anything-but-glamorous days as a White House intern during the JFK years and shares how she fell in and out of love with Bill Clinton—from a distance, of course. But mostly she speaks frankly and uproariously about getting older and dealing with the tribulations of maintenance, menopause, empty nests, and life itself.

I Feel Bad About My Neck is a book of wisdom, advice, and insight that is utterly courageous, wickedly funny, and unexpectedly moving in its truth telling.

1. In “I Feel Bad About My Neck,” Ephron writes that she avoids making truthful comments on how her friends look, even when they ask her directly [pp. 3–4]. Why is this a wise decision? She says, “the neck is a dead giveaway” [p. 5]. When women seek each other’s opinions about how their necks, and other features, really look, do they want the truth, or do they want to be reassured?

2. According to Ephron, most authors who write about aging say “it great to be old. It’s great to be wise and sage and mellow” [p. 7]. What, for her, is wrong with this approach? How would you compare I Feel Bad About My Neck with other books you have read about aging or menopause? Is it more useful?

3. In “I Hate My Purse,” Ephron sees her purse as a microcosm of her life—it is the symbol of her inability to be organized. Given the current obsession with expensive purses in American fashion, why is her choice of a plastic MetroCard bag amusing [pp. 15–16]?

4. What do the foods we cook, the cookbook authors we seek to emulate, and the way we entertain guests, say about how we want life to be? Why does Ephron give up her attachment to Craig Claiborne and begin “to make a study of Lee Bailey” [p. 26], and then later move on to Martha Stewart and Nigella Lawson?

5. Heartburn was a “thinly disguised novel about the end of my marriage” [p. 28]. If you have read Heartburn or seen the film, think about how Ephron presents her current stage in life, and what has changed for her. What is her attitude as she reflects on earlier and more difficult periods of her life?

6. Ephron writes, “I sometimes think that not having to worry about your hair anymore is the secret upside of death” [p. 32]. She also says that going to a hair salon twice a week and having her hair blown dry is “cheaper by far than psychoanalysis, and much more uplifting” [p. 34]. For Ephron, “maintenance” has larger implications than just taking care of one’s appearance. What are the larger meanings of these annoying, repetitive actions, for her—and by implication, for women in general?

7. What would this book be like if written by a man? Do men have similar issues about growing older, and do they talk or think about them in similar ways? Think about and share ideas about what well-known man—a writer or a celebrity, perhaps—might be capable of writing the male version of I Feel Bad About My Neck.

8. In “Parenting in Three Stages,” Ephron revises some commonly held notions. Adolescence, for instance, is a period that helps parents separate from their children, and there is “almost nothing you can do to make life easier for yourself except wait until it’s over” [p. 62]. Later in the book she says, “the empty nest is underrated” [p. 125]. How does being in her sixties, with her children out of the house, change Ephron’s perspective on motherhood?

9. In “Moving On,” Ephron writes about an important and prolonged episode in her past: a love affair with an apartment building. How does she eventually “move on”? Does this essay suggest that she has become more pragmatic with time? How does she change her mind about what makes sense for her, as she gets older?

10. Why is “The Story of My Life in 3,500 Words or Less” such an effective way of telling one’s life story? What does Ephron focus on as the most important issues in this miniaturized autobiography? What lessons has she learned?

11. While this is undoubtedly a funny and enjoyable book, in what ways is it also a serious book? What are Ephron’s most important insights in “Considering the Alternative”?

12. What, if anything, does I Feel Bad About My Neck have to say about the benefits of growing older?

13. Certain small pieces in this collection might provoke you and members of your group to try writing your own version. What would you include, for instance, in your own list of “What I Wish I’d Known”?

14. What is the funniest moment in this collection, and why?

Regina Barreca, ed., The Penguin Book of Women’s Humor; Erma Bombeck, The Best of Bombeck; Michael Chabon, The Amazing Adventures of Kavalier and Clay; Wilkie Collins, The Woman in White; Fran Lebowitz, The Fran Lebowitz Reader; John le Carré, Smiley’s People; Doris Lessing, The Golden Notebook; Dorothy Parker, The Portable Dorothy Parker; Paula Poundstone, There’s Nothing in This Book That I Meant to Say; Amy Sedaris, I Like You: Hospitality Under the Influence; Anthony Trollope, The Way We Live Now; Edith Wharton, The House of Mirth.
Learn More About I Feel Bad About My Neck
print
Back to Top