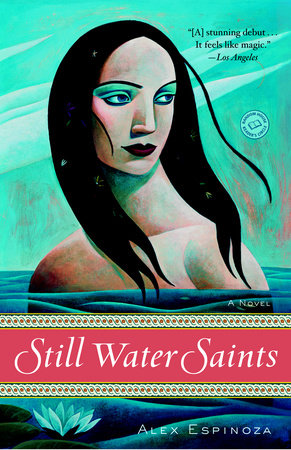 1. Time ﬂows in several directions and at different rates in Still Water Saints. Perla’s story unfolds over the course of a single year, punctuated by a series of saint’s days, while the ﬁrst person chapters take place on different time-lines–some during the same year, some at earlier times. What indications of the passage of time appear in the various parts of the book? How did this structural choice affect your reading of the novel? Why do you think the author used this structure?

2. Perla’s chapters are all set on feast days of speciﬁc saints. How, if at all, do the ﬁrst-person chapters that follow each of these chapters relate to those saints? Are they connected by date? By theme?

3. While Perla is the central character of the novel, a number of other characters pass through the various chapters of the book, sometimes in very subtle ways. Trace how Rosa, Nancy, Rodrigo, Juan and Debra, Shawn, and Beatrice appear at various points in the novel. How do they cross paths with one another and with Perla?

4. The ﬁrst-person chapters in Still Water Saints are told from many different viewpoints. Which character was your favorite, and why? Are there any other characters whose stories you would have liked to have read more about?

5. Perla ﬁlls various roles for different members of the community: She is a shop owner, a healer, a teacher, a spiritual leader, a surrogate parent. Do other people in the community serve roles that overlap Perla’s? How do they react to Perla? How does she react to them? What other roles does Perla serve?

6. Agua Mansa is a southern California town with a largely Mexican-American population. How do various characters express their dual heritages as both Americans and as people of Mexican descent? What aspects of their cultures do characters like Lluvia, Alfonso, and Juan embrace? How do characters like Shawn, an Irish-American, interact with the dominant Mexican-American culture in Agua Mansa? What about the Mexican-born Rodrigo?

7. Agua Mansa is a ﬁctional community located in California’s Inland Empire, an area located about sixty miles east of Los Angeles. What can you gather about the town’s history and geography from the details the author provides in Still Water Saints? How does this California mesh with other depictions of California you know from books, the media, or personal experience?

8. In the opening pages of Still Water Saints, Perla appears to have magical powers, but these are quickly discounted. What powers, if any, do you feel Perla has? What does Perla herself think or claim about her abilities? Is she a charlatan or a fraud? What point do you think the writer was trying to make by opening with a scene of magic?

9. Perla provides many of her customers with the tools or instructions they need to perform various rituals. For example, she sells Azucar a rosary with which she can perform a novena for Beatrice, and she supplies Juan’s mother with sugar skulls for her Day of the Dead altar. What other rituals appear in the book? What function do the rituals serve for the people who perform them? Do you think they work?

10. Still Water Saints is written in English, and yet there is a Spanish-language presence in the novel. How does the author’s inclusion of Spanish and Spanglish function in the novel as a whole? What does a character’s use of English, Spanish, Spanglish, or other languages reveal about him or her? How did the author’s inclusion of Spanish and Spanglish add or detract from your reading experience?

11. A major theme of Still Water Saints is change/transformation. Discuss how Perla, Azucar, Rosa, and other characters transform throughout the novel, as well as how the town of Agua Mansa undergoes change. Why do you think the author chose to set his novel, and create his characters, around a time of change and transformation?

12. Music plays an important role in much of the novel. How does music factor into each character’s story, and how does it affect them? Do you think music has power? Explain your answer in the context of the novel.

13.We learn that Perla took over the Botanica Oshun from Dario. When the time comes, who do you think will take over from Perla?

The Girl Who Came Back

No Place to Hide

Her Father’s House
Back to Top