The Case for God Reader’s Guide 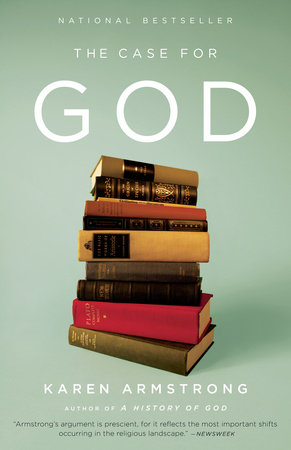 The Case for God Reader’s Guide

The introduction, discussion questions, and suggested further reading that follow are designed to enhance your group’s discussion of The Case for God, the masterful new book by the bestselling author of The Spiral Staircase and The Great Transformation.

Karen Armstrong’s The Case for God is a sweeping history of how humans have conceived of God from premodern hunter-gatherers to present-day fundamentalists, from Socrates and Aquinas to Jerry Falwell and Jacques Derrida. The book traces the changes in religious practice and belief as they paralleled and were influenced by dramatic shifts in the social and economic arrangements of human society, most especially by the Enlightenment and the scientific revolution.
But The Case for God is more than a record of religious history. It is an argument for a particular tradition within that history—the apophatic tradition, whose purpose is to take one beyond the limits of language and rational thought to a state of unknowing and silent awe. Armstrong reveals a steady movement away from the apophatic character of the ancient traditions of Judaism, Christianity, and Islam toward a conception of religion in which abstract belief is more important than spiritual practice and strident adherence to dogma more valued than a life of humility and compassion.
Armstrong makes a sharp distinction between mythos and logos. In premodern cultures people were aware of the difficulty in speaking of God. God was beyond definition, unlimited, and therefore not amenable to human discourse, human reason, or logos. An experience of the sacred was available only through mythos—the myths and rituals that took people to a state of ekstasis, a stepping out of the separate self into a felt awareness of the divine. “Religion,” Armstrong writes, “therefore, was not primarily something that people thought but something they did” [p. xii], introducing a distinction that she develops throughout the book—religion as practice and ritual rather than thought and belief. Logos was necessary for survival, for creating social arrangements, cultivating food, improving the material conditions of life. But mythos was equally important for maintaining the sacred dimension of human existence.
Armstrong traces the historical trajectory from mythos to logos—from the apophatic experience to the literal and rational interpretation of scripture. There are exceptions, in such theologians as Denys the Areopagite and Paul Tillich, poets like Wordsworth and Keats, and postmodernist philosophers like Jacques Derrida and John D. Caputo. But after Aquinas the major movement has been either toward a fundamentalist view of scripture, which early Jews and Christians would have found absurd; or toward an accommodation with scientific rationality, in which the myths of religion are contorted to fit a scientific worldview; or toward the belligerent atheism of Richard Dawkins, Sam Harris, and Christopher Hitchens, which attacks the straw man of fundamentalism as if it were the only manifestation of religious life. The state of receptive unknowing, as practiced by Socrates, Lao Tzu, and the Buddha, as well as Christian, Sufi, and Hebrew mystics, has largely receded from mainstream religion.
In the Epilogue, Armstrong observes that “Religious leaders often spend more time enforcing doctrinal conformity than devising spiritual exercises that will make these official ‘beliefs’ a living reality in the daily lives of the faithful” [p. 325]. The Case for God is an eloquent and erudite plea for a restoration of spiritual practice over doctrinal conformity, and a call for a religious life marked by moments of self-emptying, of private rapture and shared ritual, and a willingness to admit that when it comes to God it is better to know that one does not know than to think that one does.

1. In her introduction, Armstrong writes that “Religion is a practical discipline that teaches us to discover new capacities of mind and heart” [p. xiii]. Why does Armstrong repeatedly assert the primacy of religious practice, ritual, and discipline over merely assenting to a set of abstract beliefs?

2. In what ways is The Case for God surprising? How does it challenge conventional ideas of God, religious history, and the relationship between science and religion?

4. What is the distinction between mythos and logos? Why is it important that these modes of thought remain separate? In what ways have they been confused in the modern era? What are the consequences of confusing them?

5. Why would premodern Christians regard as misguided the kind of literal interpretation of the Bible favored by fundamentalists today?

6. What are the dangers of idolatry? Why are monotheistic religions, as well as absolutist secular philosophies, especially prone to idolatry?

7. “We tend to tame and domesticate God’s ‘otherness,’” Armstrong writes. “We beg God to support ‘our’ side in an election or a war, even though our opponents are, presumably, also God’s children and the object of his love and care” [p. ix]. What are some recent examples that support these claims?

8. How did theologians respond to the Enlightenment and the scientific revolution it engendered? What effect did these large intellectual and historical movements have on the way people viewed the truth of scripture?

9. Armstrong writes:“By revealing the inherent limitation of words and concepts, theology should reduce both the speaker and his audience to silent awe” [p. 142]. What is the value of being reduced to silent awe? Why might a state of silent wonder, or receptivity, be preferable to a state of religious certainty?

10. Why does Armstrong object to the kind of aggressive atheism and vehement anti-religious rhetoric exemplified in the work of writers like Christopher Hitchens, Sam Harris, and Richard Dawkins? In what ways do their arguments against religion mirror the thinking of the fundamentalists they so despise?

11. Armstrong writes that “the desire to cultivate a sense of the transcendent may be the defining human characteristic” [p. 9]. Does this seem true? Why might the desire for transcendence be such a central human impulse?

12. How are postmodernist and deconstructionist ways of reading similar to ancient rabbinical forms of exegesis?

13. Armstrong summarizes the thought of a huge range of philosophers, theologians, and religious figures, from Socrates to Jacques Derrida. Within this broad overview, what religious ideas or practices seem most useful or relevant today?

14. Paul Tillich asserts that “God does not exist. He is being itself beyond essence and existence. Therefore to argue that God exists is to deny him” [p. 282]. What is the meaning of this apparent contradiction? In what ways does Tillich’s statement speak to the major themes of The Case for God?

15. The Case for God ends with a provocative question: “. . . how best can we move beyond premodern theism into a perception of ‘God’ that truly speaks to all the complex realities and needs of our time?” [p. 317]. Why is it appropriate that Armstrong end with a question rather than an assertion? How might this question be answered? What are the most pressing needs of our time?

Karen Armstrong’s first book, the bestselling Through the Narrow Gate, described her seven years as a nun in a Roman Catholic order. She has since published numerous bestselling books, including A History of God, Islam, Buddha, The Spiral Staircase, and The Great Transformation. She is a freelance writer and she lives in London.

Karen Armstrong, A History of God: The 4,000-Year Quest of Judaism, Christianity, and Islam; Reza Aslan, No God but God: The Origins, Evolution, and Future of Islam; John D. Caputo, On Religion; Jean Clottes and David Lewis-Williams, The Shamans of Prehistory: Trance and Magic in the Painted Caves; Rachel Elior, The Three Temples: On the Emergence of Jewish Mysticism; Chris Boesel and Catherine Keller, Apophatic Bodies: Negative Theology, Incarnation, and Relationality; Thomas Merton, Essential Writings; Krista Tippett, Einstein’s God: Conversations About Science and the Human Spirit; Paul Tillich, A History of Christian Thought: From Its Judaic and Hellenistic Origins to Existentialism; Denys Turner, The Darkness of God: Negativity in Christian Mysticism.
Learn More About The Case for God
print

When God Was A Woman

The Battle for God
Back to Top