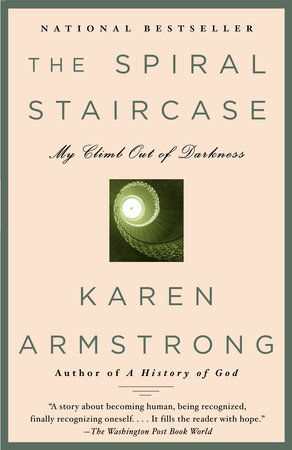 “A story about becoming human, being recognized, finally recognizing oneself. . . . It fills the reader with hope.” —The Washington Post Book World

The discussion questions, suggested reading, and author biography that follow are intended to enhance your group’s reading of Karen Armstrong’s memoir The Spiral Staircase: My Climb Out of Darkness.

Karen Armstrong, the writer who has introduced thousands of readers to the world’s great religions, now tells the story of one of the most difficult periods of her own life. At the age of seventeen, driven by a strong yearning to connect with God, she entered a Roman Catholic convent in England. She emerged seven years later in 1969, having failed in her quest for a spiritual life, to begin anew in a world now alive with antiwar activism, the music of the Beatles, and the counterculture. While pursuing degrees in literature at Oxford, she struggled to find a place for herself but was overwhelmed by feelings of alienation and despair. At times she experienced frightening symptoms that eventually led to a diagnosis of epilepsy. When her plans for an academic career went awry, she set out upon an independent path, writing books about theology. It was only through this pursuit that, years later, she arrived at a kind of spiritual fulfillment.

Deeply honest, thoughtful, and full of hope, The Spiral Staircase is a moving odyssey of a writer’s search for God and for herself.

1. Of convent life, Armstrong writes, “We lived together in community, cheek by jowl, but were so lonely that we might as well have been living in solitary confinement” [p. 26]. She notes as well “the emotional frigidity of our lives” and the fact that “friendship was frowned upon” [p. xvi]. She says, “I entered in 1962 as an ardent, idealistic, untidy, unrealistic, and immature teenager, and left seven years later, having suffered a mild breakdown, obscurely broken and damaged” [p. xi]. What principle was behind the goal of making the convent a punitive, cold environment rather than a life-affirming one?

2. Armstrong writes, “I was . . . convinced that I had embarked on a spiritual quest, an epic adventure, in the course of which I would lose the confusions of my adolescent self in the infinite and ultimately satisfying mystery that we call God” [p. viii]. How authentic was Armstrong’s desire to become a nun? In retrospect, how might her spiritual urge have been channeled more positively?

3. On her emergence from the convent into the vastly changed social world of 1969, Armstrong felt alien and lost. She writes, “I did feel in exile from everything that made sense. Because I could take nothing for granted, and did not know how to interpret the sixties world that had come into being during my absence, I too felt that the world had no meaning. . . . I felt spiritually dizzy, lacking all sense of direction and not knowing where to turn” [p. 24]. Having lived for seven years in a system based on strict obedience, she finds herself amidst a culture of rebellion. Does she rebel against her past in small ways? How does she learn to think for herself?

4. Among Armstrong’s chief reasons for leaving the convent was her daily difficulty with prayer and meditation: “I never had what seemed to be an encounter with anything supernatural, with a being that existed outside myself. I never felt caught up in something greater, never felt personally transfigured by a presence that I encountered in the depths of my being. . . . So, even in the convent, God had been conspicuous by his absence from my life” [pp. 42–3]. How did she interpret this failure to engage in the most central act of religious life? What might have been the reasons for her inability to pray?

5. How did the Hart family—and particularly Jacob—help Karen in reentering the world? What do she and Jacob have in common, and how do they help each other?

6. Karen and her friend Rebecca both suffer from anorexia. Her psychiatrist Dr. Piet tells her, “You’ve never been in love; you don’t want to look like a woman. . . . You’re still to an extent living in a convent, one of your own making. Both you and Rebecca are using all these repressed emotions to punish yourselves” [p. 108]. In his adherence to a strictly Freudian methodology, Dr. Piet is often off the mark. Does his analysis, in this case, seem correct about Karen and Rebecca? How does Karen eventually overcome her tendency toward self-punishment?

7. The book is inspired by T. S. Eliot’s Ash-Wednesday [see pp. xxi-xxii]. How do Armstrong’s thoughts about spirituality and depression resonate with the poem? What are the particular lessons learned from the poem, and what is the nature of the gift it makes to her [see pp. 139–44]?

8. Dr. Piet’s approach to Armstrong’s frightening symptoms—which he calls her “‘interesting’ psychic states”—is anything but sympathetic [pp. 122–23]. When she attempts suicide, he believes that she is acting in anger against him “whereas in reality, he was nowhere near as crucial to me as he seemed to imagine” [p. 126]. What are Armstrong’s thoughts and theories about why psychiatry didn’t help her [pp. 143–44]?

9. What is the irony of Armstrong’s sense of God’s presence in the midst of her epileptic seizure in the Baker Street subway station [p. 178]? Why did she consider the diagnosis of epilepsy “an occasion of pure happiness” [p. 182]?

10. How does Armstrong’s performance on the pilot for the BBC film The Body of Christ free her to speak her mind [p. 220]? Why, when she speaks about the ages-old anti-female bias of the Church, does she feel “elated” [p. 221]?

11. Armstrong’s study of Paul and his Jewish context is an intellectual breakthrough. How does her journey to Israel and the Middle East change her perspective on herself?

12. Given what she says about being “able to feel the pain of other human beings” for the first time in years, it seems that the drugs stabilizing her epilepsy allow Armstrong to have an emotional breakthrough as well [pp. 258–59]. What does she learn about the importance of feeling and acknowledging her own suffering [p. 272]?

13. Armstrong notes, “In deciding to write about God, I knew that I was setting off on a lonely path.” So she puts her struggle with faith in the context of quest mythology: “[The hero] must venture into the darkness of the unknown, where there is no map and no clear route. He must fight his own monsters, not somebody else’s, explore his own labyrinth, and endure his own ordeal before he can find what is missing in his life” [p. 268]. How does this realization provoke Armstrong to make a choice that others insist is a mistake? Why is this among the book’s most important insights?

14. What is important about “the habit of empathy” [pp. 272, 274]? Consider Armstrong’s ideas about “editing out ego” and ecstasy [pp. 278–79], as well as her statement that “We are most creative and sense other possibilities that transcend our ordinary experience when we leave ourselves behind” [p. 279].

15. Why was her study of Muhammad, of all her books, the one that provoked “a kind of ecstasy” [p. 279]? Why did the events of September 11, 2001 change her thinking once again [p. 303]? How does she see Islam in relation to Islamic
fundamentalism?

16. How are silence and solitude transformed for Armstrong as she works on A History of God? What does she mean when she says, “Silence itself had become my teacher” [p. 284]?

17. Can you relate to Armstrong’s spiritual journey? How is it similar to or different from your own? Is the struggle to come to terms with religious truth a universal one?

Karen Armstrong is the author of numerous other books on religious affairs including the bestselling A History of God, Through the Narrow Gate, Holy War: The Crusades and Their Impact on Today’s World, and Buddha. Her work has been translated into forty languages. Since September 11, 2001, she has been a frequent contributor to conferences, panels, newspapers, periodicals, and other media on both sides of the Atlantic on the subject of Islam. She lives in London.

The Time Is Now
Back to Top