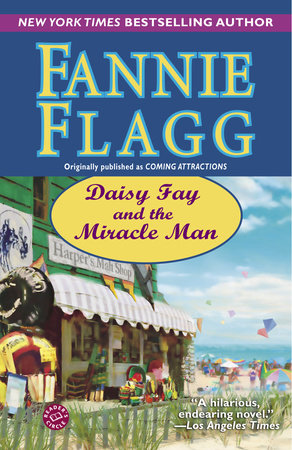 1. The novel begins the day after Daisy Fay’s eleventh birthday and ends more than seven years later. How does the passage of time affect the way the story is told? Is the older Daisy Fay at the end very much like the child at the beginning?

2. In what ways is Daisy Fay a typical young girl and in what ways is she unique? What formative factors in her life stand out as unusual?

3. Do you agree that Daisy Fay’s parents should have separated? They both had their faults, but do you think more of the blame lies with one or the other?

4. Throughout the novel, Daisy Fay is drawn to people with certain characteristics, and she seems to form friendships effortlessly. How does she read people and assess their character? What is she seeking in her relationships, and does she always get it?

5. Why do you think the author uses the diary format for this novel?

6. Do you find any of the attitudes toward race that are expressed in the novel surprising? What is Daisy Fay’s attitude toward people she views as different from herself or from society at large?

7. Daisy Fay’s mother abandons her twice, once when she leaves Daisy’s father and a second time when she passes away. Do you think Daisy had a good relationship with her mother? In an era when women were predominantly homemakers, why do you think Daisy stayed with her father?

8. Do you think a similar story could have taken place in another part of the country? To what extent does the setting affect what happens in the novel?

9. A whole cast of colorful characters parade through the pages of the novel: Mrs. Dot, Peachy Wigham, Mr. Cecil . . .Can you think of someone like these characters in real life?

10. What is it about Kay Bob Benson that makes the reader love to hate her so much?

11. Why do you think Pickles and Daisy Fay stop being friends after Pickle gets pregnant? Do you think friendships can ever survive unscathed when people’s lives change dramatically?

12. What leads to Daisy Fay’s eventual success? What qualities does she have that make people warm up to her and want to help her?

13. For a large part of the novel Daisy Fay believes that her father and Jimmy Snow killed a man in order to keep her safe. To what extent do the people in Daisy Fay’s life protect her and to what extent do they act without regard to the impact their actions may have?

14. Who do you think is the “miracle man” in the title, and what miracle might he have performed?

15. While humor plays a large role in the novel, happy events are often tempered by tragedies that follow on their heels. How does Daisy Fay cope with unfortunate circumstances? Are Daisy’s attempts at humor always convincing?

16. In what way do you think Jimmy Snow was in love with Daisy Fay—like a daughter or more romantically? Do you
think he should have told her?

17. Do you think Daisy Fay’s future after the novel ends will be bright? Why or why not? What might be in store for her beyond the last page?

Learn More About Daisy Fay and the Miracle Man
print

Standing in the Rainbow

The Book of Joe
Back to Top