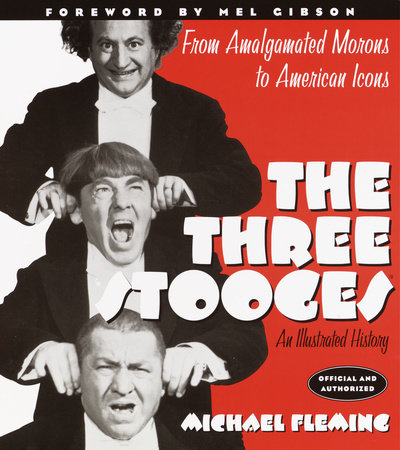 An Illustrated History, From Amalgamated Morons to American Icons

About The Three Stooges

More people today can name the members of the Three Stooges than can name three justices of the Supreme Court. The Stooges are comedy icons whose enduring appeal and slapstick legacy have made them one of the most famous and beloved comedy troupes in the world. Michael Fleming’s The Three StoogesTM is the first complete, authorized biography of the men who made pie fights part of our national cultural heritage.

A juggernaut of wise guys, headlocks, and unforgettable insults, this book tells the whole history of the Stooges, starting with their origins in the golden years of vaudeville, when the boys from Brooklyn honed their craft. Moe, Curly, and Shemp Howard were born Moses, Jerome, and Samuel Horwitz–and were believed for many years to be the three least accomplished sons of their Lithuanian immigrant parents. Ultimately, of course, the Three Stooges reinvented the rules of slapstick comedy: never be caught unprepared in a pie fight, never slap one wise guy in the face if you can slap three in a row, and never underestimate the value of a good poke in the eye.

Signed in 1934 by Columbia Pictures to a renewable contract that had them making at least nine short films a year, the Stooges learned firsthand about the sharks swimming through Hollywood’s early waters. And after nearly a quarter century of producing the short films for which the Stooges are so well known and loved, the studio declined to renew their contract in 1954, and the pioneering pie-throwing professionals lost their jobs. Fittingly, though, Moe & Co. were destined to have the last laugh: the advent of television revived their careers after the decline of vaudeville and Hollywood shorts, and a new generation of belly laughs was born.

From the Stooges’ humble origins to movie stardom to comedy legends, there’s something here for every level of fan–from folks who watched them on television as a kid to Stooge scholars and certified "knuckleheads." Featuring over two hundred photographs, many of them rare; interviews with Stooge friends and families; and a complete filmography with every "woob-woob" and crashed society cocktail party lovingly detailed, this book will be treasured by all Stoogedom.

MICHAEL FLEMING has been drawing fantastic scenes on various surfaces since the age of three. His colorful work blends a love of nature with a dash of the mischievous. He is the illustrator of 10 Busy Brooms, Twinky the Dinky Dog and Ten… More about Michael Fleming