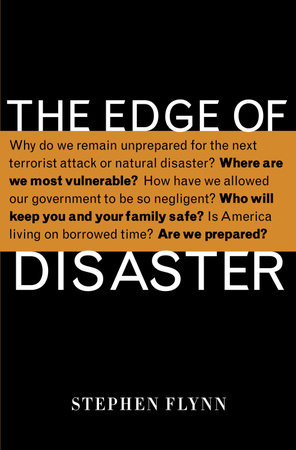 The Edge of Disaster

About The Edge of Disaster

Why do we remain unprepared for the next terrorist attack or natural disaster? Where are we most vulnerable? How have we allowed our government to be so negligent? Who will keep you and your family safe? Is America living on borrowed time? How can we become a more resilient nation?

Americans are in denial when it comes to facing up to how vulnerable our nation is to disaster, be it terrorist attack or act of God. We have learned little from the cataclysms of September 11 and Hurricane Katrina. When it comes to catastrophe, America is living on borrowed time–and squandering it. In this new book, leading security expert Stephen Flynn issues a call to action, demanding that we wake up and prepare immediately for a safer future.

The truth is acts of terror cannot always be prevented, and nature continues to show its fury in frighteningly unpredictable ways. Resiliency, argues Flynn, must now become our national motto. With chilling frankness and clarity, Flynn paints an all too real scenario of the threats we face within our own borders. A terrorist attack on a tanker carrying liquefied natural gas into Boston Harbor could kill thousands and leave millions more of New Englanders without power or heat. The destruction of a ship with a cargo of oil in Long Beach, California, could bring the West Coast economy to its knees and endanger the surrounding population. But even these all-too-plausible terrorist scenarios pale in comparison to the potential destruction wrought by a major earthquake or hurricane.

Our growing exposure to man-made and natural perils is largely rooted in our own negligence, as we take for granted the infrastructure handed down to us by earlier generations. Once the envy of the world, this infrastructure is now crumbling. After decades of neglect, our public health system leaves us at the mercy of microbes that could kill millions in the next flu pandemic. Flash flooding could wipe out a fifty-year-old dam north of Phoenix, placing thousands of homes and lives at risk. The next San Francisco earthquake could destroy century-old levees, contaminating the freshwater supply that most of California relies on for survival.

It doesn’t have to be this way. The Edge of Disaster tells us what we can do about it, as individuals and as a society. We can–and, Flynn argues, we must–construct a more resilient nation. With the wounds of recent national tragedies still unhealed, the time to act is now.

Flynn argues that by tackling head-on, eyes open the perils that lie before us, we can remain true to our most important and endearing national trait: our sense of optimism about the future and our conviction that we can change it for the better for ourselves–and our children.

Stephen Flynn is among the world’s most widely cited experts on homeland security and trade and transportation issues. A senior fellow with the National Security Studies Program at the Council on Foreign Relations since 1999, he is the author of… More about Stephen Flynn

“Steve Flynn offers the answer not only to protecting America from terrorist attacks and natural disaster but also to revitalizing our democracy. This book is a must-read for all members of Congress, 2008 presidential candidates, and ordinary citizens who want to build a better and safer future.”
–Anne-Marie Slaughter, dean, Woodrow Wilson School of Public and International Affairs, Princeton University

Advance praise for The Edge of Disaster

“Steve Flynn has done it again. Like America the Vulnerable before it, The Edge of Disaster is the must-read book for every American, elected official, and presidential candidate who is committed to ensuring that our nation continue to thrive in perilous times.”
–Mark Warner, former governor of Virginia

“Since 9/11, protecting our nation against a terrorist attack has consumed policy makers in Washington. What Stephen Flynn points out in The Edge of Disaster is that much of this effort has been directed overseas, often at the expense of our homeland and its much more likely areas of vulnerability. Laying out a series of potential disasters both manmade and natural, Flynn calls for a greater emphasis on preparedness and the ability of communities and the nation to recover. Painting an often frustrating and infuriating picture of missed opportunities, The Edge of Disaster is a call to action. The time to act is now. We can only hope that policy makers are listening.”
–Christine Todd Whitman, former governor of New Jersey and
former administrator, Environmental Protection Agency (2001-03)

“Steve Flynn’s book makes the very persuasive argument that national security preparedness is linked to natural disaster preparedness. By investing significantly in our critical infrastructure, in citizen preparedness, and most importantly in leadership, we can be better prepared for all hazards. A great book that I highly recommend.”
–James Lee Witt, former director, Federal Emergency Management Agency

“Steve Flynn has become a relentless contributor to the dialogue on prioritizing the work of the post-9/11 security environment. The Edge of Disaster calls into question the neglect of domestic preparedness in favor of the Department of Defense-driven offensive in the global war on terrorism. The book offers provocative challenges to both our elected and our private-sector leaders, and both should read it thoroughly.”
–Admiral James M. Loy, former commandant, U.S. Coast Guard, and former deputy secretary of homeland security

The Edge of Disaster