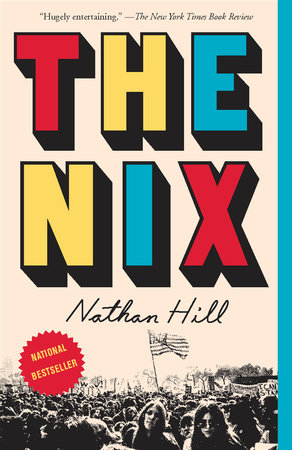 The introduction, author biography, discussion questions, and suggested reading that follow are designed to enhance your group’s discussion of The Nix, the captivating debut novel by Nathan Hill.

1. Why do you think that the author chose to call his novel The Nix? What is a Nix according to folklore? How does the Nix function symbolically within the novel and which major themes of the novel does it help to facilitate or uncover? Who in the story believes himself or herself to be a Nix and why? Do you agree with that person? Why or why not?

2. At the beginning of the story, Faye reveals that she believes the things a person loves the most will ultimately hurt them the worst. Which events in her life may have caused her to adopt this point of view? Does the rest of the book seem to support this view of love or overturn it? Does Faye ever change her mind about this? Does her son, Samuel, share her view of love? Discuss.

3. Why does Faye leave her son, Samuel, and her husband? How does Samuel react to her departure, and what impact does this abandonment have on his life and development? What is it like when the two reunite? How does their relationship change over the course of the book, and what causes these changes? Do either of the characters seem to achieve catharsis? If so, how?

4. How do Faye’s parents react when she is accepted at the University of Illinois’s new Chicago Circle campus and tells them that she wants to attend? Why do you think that they have this reaction? How does Faye herself seem to feel about the prospect of leaving home? What helps her to make the final decision to go to Chicago, and why does her father tell her to never come back? Why do you think Faye refrains from addressing the misunderstanding that has caused so much strife between her and her parents?

5. Evaluate the treatment of women in the book. What kinds of experiences do the female characters share? How are they treated by the male? What do the men in the book think women should be like? Do the women meet these expectations or defy them? Explain. In the sections set in the 1960s and ’70s, how does feminism seem to impact the way that the women are perceived by those around them? How do they respond to these expectations and stereotypes? Is Faye’s experience similar to the experiences of the other women or very different? Discuss.

7. Evaluate the treatment of technology in the book. Is technology portrayed as a positive invention or a negative one? How does the characters’ use of technology affect their communication, their daily lives, and their development as people? Why are Samuel and Pwange especially addicted to Elfscape, and why does Pwange believe that Elfscape is more meaningful than the real world? What function or purpose does the game serve in their lives? What might this relationship reveal about contemporary life?

8. Consider the theme of the relationship between storytelling and point of view. What does the treatment of Faye’s story in the press reveal about this topic? Does the press, as depicted in the novel, provide fair and unbiased accounts of the news they report? What does the book also suggest about the publishing industry? Are the stories that each of the characters tells truthful and reliable? What does this information reveal about how we should approach storytelling as both storytellers and readers/listeners? Does the book ultimately suggest how we can best determine whether or not a source is reliable and a story is true?

9. Explore the motif of secrets. What are some of the secrets that the characters keep? Why do they keep these things secret? Do any of the characters ever reveal their secrets? If so, what is the outcome, and how are these secrets received? What do the responses to these reveals suggest about our fears of being known completely?

10. In the Choose-Your-Own-Adventure portion of the book, what choice does Samuel make when Bethany asks him if he can help her avoid her upcoming nuptials and invites him into her bedroom? Why does he make this choice? Do you believe it was the right choice? Why or why not? After some time passes, how does Samuel come to view his decision in that moment?

11. Evaluate the theme of shame. What causes the various characters in the novel to feel shame? How does the prevalence of this feeling impact their lives, the people they become, and the life choices they make? Do any of the characters overcome their feelings of shame? If so, how do they accomplish this?

12. Consider the portrayal of suburban middle-class living in the novel. How did industry affect and shape American life? What clues can we find in descriptions of the landscape? Does the book suggest whether industry provided a happier or better existence for families? For instance, is Frank living a better life because of his willingness to leave his home in Norway? What would you say the novel ultimately suggests about progress and the American dream?

13. What kinds of stories does Frank share with his daughter, Faye, as she is growing up? What effect do these stories have on her? Why do you think that she chooses to share these tales with her own son? What seems to be the purpose of telling these stories? What lessons or messages do the stories contain?

14. When Faye reaches Norway, how does what she finds compare to what her father had shared with her about his home and his past? Who is Freya, and how does Faye’s knowledge of who Freya is affect the way that she relates to and understands her father? How does the trip to Norway ultimately affect Faye’s relationship with her father and with Samuel?

15. Many of the characters in the book engage in some type of art. What role or purpose does art seem to fulfill in their lives? Why does Samuel decide to become a novelist? What does he hope that his book The Nix will achieve?

16. Evaluate the theme and motif of protest. In addition to the protests that Faye takes part in as a young woman, Samuel attends a protest with Bethany and serves as a witness to other protests. What are some of the causes that the characters protest? What happens at the protests? Are they successful? What do you think Walter Cronkite meant when he observes that maybe the story isn’t the people protesting but the people who are not? Does the book ultimately portray protest as a valuable pursuit or a futile one? What seems to be the purpose of protest? Discuss.

17. Why does Judge Charlie Brown take on the case against Faye? How do the two know each other? Does Judge Brown get the outcome he desires? Why or why not? What does Brown’s character suggest about fairness and justice in the world?

18. Who is Sebastian? How does Faye meet Sebastian, and why is she initially drawn to him? What is her reaction to the revelation of his true identity? What does Faye recognize as their common bond?

19. Consider the collective view of America that the novel offers. What does this America look like? Would you say that is an accurate portrayal? Why or why not? How does the author use comedy and the absurd to pose truths about the cultural and political landscape? Alternatively, how does he employ elements of tragedy to accomplish this? Does one method seem to be more successful in accomplishing this than the other? Explain.

20. In addition to the story of the Nix, another recurring tale in the novel is the parable of the elephant. What is the lesson in this parable, and what does it reveal about the true self? How might this message or way of looking at things shape your own understanding of and response to the characters in the book?

21. At the end of the book, Faye thinks: “Something does not have to happen for it to feel real” (581). What do you think she means by this? What might her statement suggest about the past, memory, imagination, and regret?