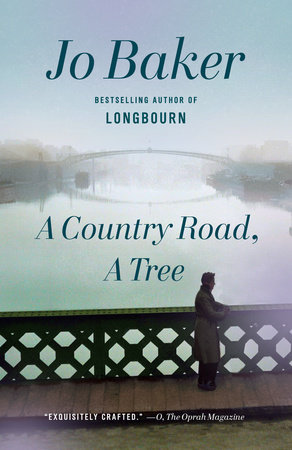 The questions, discussion topics, and reading list that follow are intended to enhance your reading group’s discussion of A Country Road, A Tree, Jo Baker’s gripping follow-­up to her New York Times Notable Book, Longbourn.

1. The epigraph to the novel is from Samuel Beckett’s novel Molloy: “When some went out, others lit up.” What do you think this means? How does it fit with or prepare for what’s to come?

2. What do we learn about this fictional version of Samuel Beckett from the prelude, set at Cooldrinagh in 1919? How would you describe his relationship with his family?

3. Baker chooses not to name Samuel Beckett in the text of the novel. What impact does this have on the portrayal of the central character?

4. After the Nazis invade France, Suzanne and her friends feel that “the key is to do something. Because that’s better than sitting around doing nothing. And so they have to figure out what they can do. Even if it’s only to ensure the fair distribution of elephant steaks” (p. 36). Where does this idea lead Suzanne, and Beckett? Can you think of any circumstances in your own life to which this philosophy would apply?

5. Throughout the novel, themes emerge that also figure into Beckett’s own writing: time, futility, absurdity. How do the events of Beckett’s life, as presented in this imagined version, illuminate these preoccupations? And vice versa?

6. “Studying the chessboard, a cigarette smoldering between his knuckles, he tries to conjure all the futures he and Marcel Duchamp might summon up between them here. Marcel lifts a piece, and sets it down, and a web of potentiality collapses and falls away to dust: the future refines itself. He follows threads of possibility. He thinks” (p. 67). What metaphor is at work here? How does it run through the rest of the novel?

7. Beckett feels compelled to read Mein Kampf: “These words have redrawn the map of Europe, they have leached out the different colours of the world. They have sucked up rights and liberties. These words kill. The world is different because of them” (p. 74). Why does he believe that words have such power? How does that belief inspire him?

8. Why do you think Beckett agrees to work with the Resistance? What motivates him?

10. As Beckett and Suzanne cross into the Free Zone, he thinks, “This is the lie of it, the willing delusion—­there is nothing eternal here. Given time enough—­and time just keeps on ticking by—­even this will cease. The water wears the rock, the rock crumbles, the water dries, the moon itself will fall to dust and there will be no one left to contemplate it” (p. 168) Is this perspective on time essentially comforting or disturbing? What feeling do you take away from this passage?

11. Miss Beamish calls writing an act of spite (p. 178), and later Beckett decides that “one lives, however hard the struggle, to spite the cunts who want one dead” (p. 199). Does spite motivate any of the characters in the novel? Are there any who seem immune to spitefulness?

12. When liberation comes, Suzanne’s and Beckett’s reactions are outwardly subdued. Why do you think this is?

13. How does Beckett’s return to Ireland, after the war, change him?

14. The novel’s title appears on page 263: “He’s lost: the broken boots, the stiffening limbs, the sun sinking, rising, sinking; a country road, a tree.” The stage notes of Beckett’s play Waiting for Godot begin, likewise, with the words “A country road. A tree.” Why is this phrase an apt title for the novel? How are these two passages connected?

15. Beckett’s concept of decency appears in the early days of the war, when a concierge notes his comings and goings (“He’ll assume that she is decent. That’s all that can be required of anybody: decency. Everything else flows from that, or from its absence” [p. 94]); it reemerges at the end, after he helps to set up the hospital (“There’s kindness here. There’s decency amongst the ruins. It is something to behold” [p. 274]). After everything he’s witnessed, why does decency remain constant for Beckett?

16. Beckett holds on to a small pebble from Ireland through the entire war. What do you think it means to him?

17. The novel’s final sentences concern hope: “Hope is not a thing that he can bring himself to consider. It really does not agree with him at all” (p. 282). What do you think this passage means? How would you describe Beckett’s relationship to hope, and how does this reflect upon the novel as a whole?

Learn More About A Country Road, A Tree
print