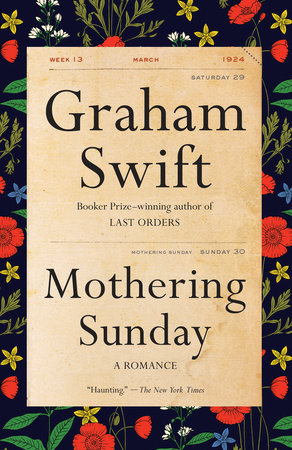 The questions, discussion topics, and reading list that follow are intended to enhance your reading group’s discussion of Mothering Sunday, an intense, passionate study of a young English maid whose piercing story spans the twentieth century.

On an unseasonably warm spring day in 1924, twenty-two-year-old Jane Fairchild, a maid at an English country house, meets with her secret lover, the young heir of a neighboring estate. He is about to be married to a woman more befitting his social status, and the time has come to end the affair—but events unfold in ways Jane could never have predicted.

As the narrative moves back and forth across the twentieth century, what we know and understand about Jane—about the way she loves, thinks, feels, sees, and remembers—expands with every page. In Mothering Sunday, Booker Prize-winning novelist Graham Swift has crafted an emotionally soaring and profoundly moving work of fiction.

1. What do you think attracts Jane to Paul? What are the needs that each fulfills for the other? Why is it important to see them together in “utter mutual nakedness” at first, and often through the lens of animal metaphors?

2. The novel focuses exclusively on Jane’s point of view, but she is not a first-­person narrator. What is the effect of this slight narrative distance between the reader and narrator, and what might it say about Jane’s ultimate profession as a novelist?

3. What is the significance of Mothering Sunday for each of the characters, and what does the meaning of the day reveal about Jane’s sense of self? Is Jane more liberated or saddened by the reminder of her own orphanhood and lack of a mother?

4. Discuss the hierarchy within the Nivens’ household. How does the employment of Jane and Cook Milly at Beechwood fit into the sense that Britain is changing and modernizing? What’s the difference between older and younger generations of servants vis-­à-­vis their respect for hierarchy, and between the servants at Beechwood versus Upleigh?

5. What’s informative about reading this story through a from the perspective of a maid—­someone whose job it is to both pay close attention to details and to ignore them?

6. Why does Jane feel able to push the limits of her freedom as a maid, and how does she do so with the Nivens and Paul? To what degree does she feel bound to her role, down to her “ghostly maid’s clothes,” and does that change over the course of her life?

7. How would you describe Jane’s sense of humor?

8. Describe the different relationships between parents and children in the novel. How does the constant reminder of the holiday of Mothering Sunday, and of Paul and Emma’s wedding, throughout the book complicate those traditional family ties, including marriage itself? And what does that say about the way tradition will carry through into the future?

9. The novel is structured in short vignettes that move back and forth in time, in intervals big and small. What are the effects of this mode of storytelling on the book’s feeling of suspense, and of how we learn about Jane?

10. Why is it so important to Jane not to define what is true or not true in her writing, especially given her fierce love of books, which, she claims, are a way people “escape the troubles of their lives”?

11. Where does Jane gain the greatest sense of belonging? Does she yearn more for inclusion or independence, to possess or to be possessed? Consider the statement that “life itself . . . was the sum of its possessions,” and what this means for Jane in particular, a servant with an extreme paucity of belongings.

12. Did you always trust Jane’s observations, memories, interpretations of events? If not, what made you question them, and/or the reliability of memory in general throughout the novel?

13. Did you get the impression that Jane ever felt guilty about Paul’s accident? Does the novel suggest that the characters were more at the mercy of fate or free will?

Graham Swift was born in 1949 and is the author of ten novels; two collections of short stories; and Making an Elephant, a book of essays, portraits, poetry and reflections on his life in writing. With Waterland he won The Guardian Fiction Award, and with Last Orders the Booker Prize. Both novels have since been made into films. His work has appeared in more than thirty
languages.
Learn More About Mothering Sunday
print

Howards End
Back to Top