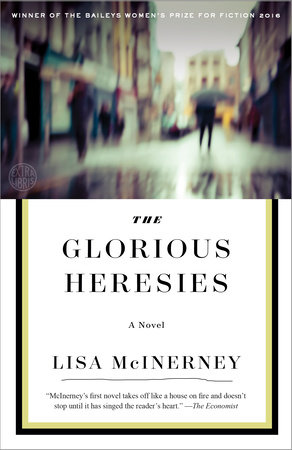 In order to provide the most informed and thought-provoking questions possible, it is necessary to reveal important aspects of the plot of this novel—as well as the ending. If you have not finished reading THE GLORIOUS HERESIES, we respectfully suggest that you may want to wait before reviewing this guide.

1. What did you know about Ireland before you read this book? How did it confirm or contradict your previous impressions of Ireland?

2. There’s a lot of black humor in The Glorious Heresies. Do you feel that this narrative technique made the dark subject matter easier to read? Were there sections where you found a humorous tone inappropriate?

3. Maureen feels very strongly about Catholicism’s negative effects on Ireland, particularly in terms of its impact on sexuality and family, despite the fact that the people of faith she encounters are, for the most part, rational and amiable. Is she right to pursue her ambitions of revenge, or is she desperately out of touch with a country she’s been away from for forty years?

4. Three of the female characters—Maureen, Georgie, and Karine—experience an unplanned pregnancy, and each deals with it in a different way. What might this say about how attitudes toward sexuality and women’s healthcare have evolved? Have they evolved at all?

5. Georgie tells Ryan that he’s lucky—they both need to survive in a tough world but as he’s male, all he has “to do is sell drugs.” Do you think that Georgie is right, or is she in denial about her own capacity—and responsibility—for getting her life back on track?

6. Does Tony have a problematic but fixable relationship with his children, or is he a fundamentally broken, dangerous man? Do you think he’s capable of genuine paternal love?

7. Over the course of the novel Ryan grows from a vulnerable, idealistic fifteen-year-old into a volatile, anxious, and self-destructive young man. Is there a point at which you think the right intervention might have changed this trajectory? Who should have made it?

8. Was Ryan justified in being upset with Karine for being with another boy while he was in prison? Is his pain his own fault because he put her on a pedestal?

9. Tara Duane insists to the other characters that she only acts from the best intentions. What did you think of her? Do you think that Tony was justified in what he did to her, given his own failings? What would you have done?

10. Were you worried for Ryan when he was in Tara’s company? Why or why not? Did you feel at any point before the reveal in “What Tara Did” that Ryan had to take responsibility for what happened? Did the gender of the abuser or the victim influence your sympathies?

11. The characters in The Glorious Heresies are working class. Do you think that any of them might have become different people if they were from middle-class backgrounds or were some of their problems unrelated to class?

12. At the end of the novel, Maureen pledges to put Ryan right. Do you think that she has the capacity, or even the intent to do some good here? Has Ryan ended up with the best possible guide, or the worst?

The Whereabouts of Eneas McNulty