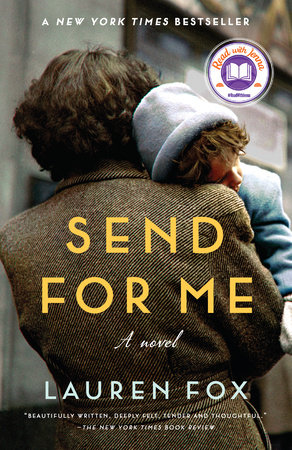 print
Send for Me Reader’s Guide

The questions, discussion topics, and other material that follow are intended to enhance your group’s conversation of Lauren Fox’s Send for Me, a multigenerational novel cast against the backdrop of World War II Germany and contemporary Milwaukee, Wisconsin, wherein the lessons and loves passed down among mothers and daughters form powerful ties that neither time nor space is able to sever.

1.  The novel is told in a kaleidoscopic, time-hopping fashion such that the strands of the four generations of women intertwine seamlessly. How did this structure affect your relationship with Klara, Annelise, Ruth, and Clare, individually and together?

2. Despite living in radically different cultures and time periods, all four women demonstrate a fierce independence regarding their fate in love and motherhood. To what degree is each of their sentiments about a woman’s place in society rebellious, and when (if ever) does it become more acceptable? Do they strike a balance of satisfying their own desires with the roles society determines for them?

3.  For the majority of the book (save the excerpts from Klara’s letters), Fox chose an omniscient narrator whose insights into the characters’ minds offer nuanced glimpses into their largely reticent relationships. How close did you feel to the women in the book as you read? What did you learn about these women from what was unsaid, or from between the lines—and what do they learn about each other in the same way?

5. How are the feelings of satisfaction and pleasure that come from marriage depicted in the novel? What is the balance between staying true to a husband or wife, and indulging in an unrequited love—either nearby or at a distance? Consider the way that Max, Johanna, Charlotte, Oskar, and Matthew maintain a presence in their lovers’ lives.

6. What dominant emotions would you say comprise the state of love in the novel? Consider the circumstances in which love is shared and withheld, realized and unrealized, romantic and familial. Is there a difference in the kind of love that takes place between people who are actually together, in time and/or space, and those who are apart? Consider the line describing Annelise and Oskar: “Their attraction is sadness, is an attempt to fill the hole, is cold comfort, is comfort.” (page 225)

7. Annelise’s entrée into motherhood is full of obstacles and, in a way, pushes up against her beliefs about her rights to her body. Where does having a child limit her self-expression, and how does it empower and revitalize her?

8. In the first timeframe of the novel, in 1930s–40s Germany, the rise of the Nazis and anti-Semitic behaviors forms a potent but subtle undercurrent. How are these daily realities felt by the characters in their work and home lives? How do their sufferings accumulate over time, and when does a breaking point occur? How large a force did you feel World War II to be in the novel, through its presence and absence?

9. Consider the title of the novel, Send for Me. How does its meaning echo across the generations? Who is being sent for, and who is doing the receiving?

10. Compare Annelise’s experiences as a young wife and mother in Germany with those in the United States. Does she seem to favor one over the other, and if so, why? Consider her affirmation: “This is her street now. These are the wooden steps that lead up to her front door, the peeling paint on the railing. This is the way the key catches, then turns the lock. Annelise is the key. She is the moment: stuck tight before she loosens, then finally gives.” (page 185)

11. It’s expressed that Clare “wondered, much later, if during those stretched out days with her grandparents she might have taken on some of their sadness; if what they gave her, along with their love, was a grain of something that embedded itself inside her, that she protected, in spite of herself, with her body’s hot sludge, until it was her own gorgeous, secret sorrow, nacreous and pearled.” (pages 77–78) What does this notion suggest about how and what we inherit from our ancestors? Are the characters in the novel able to control what is passed down?

12. How do you think Klara would have responded to living in America, had she made it?

13. Which character did you relate to most while reading? How big a role did the character’s age, location, or cultural background affect your ability to empathize with him or her?

14. When they arrive in the United States, Walter and Annelise are considered “refugees.” Discuss how the use of this word and categorization for a group of people struck you reading now, post-2020.

15. What do you know of your own family’s heritage and, if relevant, transplantation to America? How far along the chain of immigration are you, and what did the novel illuminate about that story and journey?

The Light of Luna Park

The Nature of Fragile Things
Back to Top