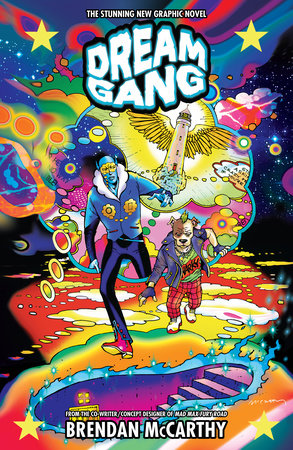 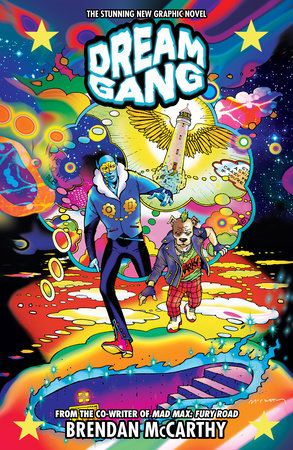 To stop a psychic plague-bomb that threatens to render humanity catatonic and the Dreamfields barren, the last Dream Voyager awakens! When the evil Zeirio commandeers a powerful Dreamship and goes on a rampage throughout the collective mindscape, it’s up to a group of psychic travelers known as the Dream Gang to stop him. Written, drawn, and colored by Brendan McCarthy, the co-writer/designer of the motion picture Mad Max: Fury Road, artist and co-creator of The Best of Milligan and McCarthy, contributor to Dark Horse Presents and 2000 AD, and writer/artist of DC Comics’ Solo and  Marvel’s Spider-Man: Fever! There’s a war on for your mind and it’s a nightmare-in Brendan McCarthy’s astonishing new graphic novel Dream Gang.


“A fever dream of a tale that is gorgeous in its roughness and, like real dreams, leaves the reader guessing as to what the next step is in the story being told.”-Comic Book Resources

To stop a psychic bomb that threatens to render all of humanity catatonic, the last Dream Voyager awakens! When the evil Zeirio goes on a rampage throughout the Dreamworlds, it’s up to a new generation of the Dream Gang to put him down. From the fertile mind of Brendan McCarthy—the cowriter/designer of Mad Max: Fury Road and a contributor to Dark Horse Presents and 2000 AD! Collects Dream Gang chapters from DHP #1–#4, #7–#10, and #14–#17.
* Features new artwork and remastered lettering for this collection.
“Brendan McCarthy’s art with the bright, trippy coloring looks great in or out of context.”—AiPT!

Brendan McCarthy is one of the UK’s most gifted graphic novelists. His groundbreaking comics of the early 80s (Strange Days, Skin, Rogan Gosh) as part of “The British Invasion” paved the way for comics’ increasing popularity in Hollywood. He was… More about Brendan McCarthy

“A fever dream of a tale that is gorgeous in its roughness and, like real dreams, leaves the reader guessing as to what the next step is in the story being told.” –Comic Book Resources