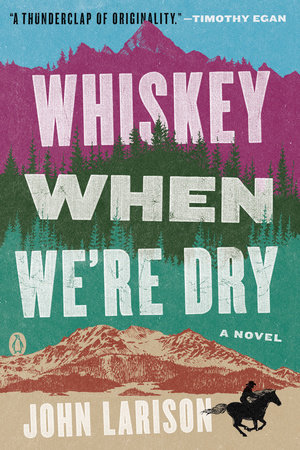 An Introduction to Whiskey When We’re Dry
In the spring of 1885, seventeen-year-old Jessilyn Harney, motherless since birth, loses her father and finds herself responsible for family’s financially strapped homestead. Facing starvation and nearby enemies, she knows the only way to survive is to find her runaway brother, Noah, and bring him home. But it’s dangerous to be a young woman travelling in the West. Without options, she cuts off her hair, binds her chest, saddles her beloved mare, Ingrid, and sets off across the mountains. Written in Larison’s lush prose that brings the wild landscape to life, Whiskey When We’re Dry is a brutal, heartbreaking tale of bravery, loss, and identity in the American West.
Growing up, Jessilyn learned sharpshooting from her father. Now known as Jesse, her skills catch the eye of the territory’s violent, capricious Governor, who offers her employment. But Noah is now an outlaw, and the very men Jesse travels with are trying to hunt him down. The journey is long, bitter, and violent, and Jess finds herself committing acts that take her further and further away from the girl she once was.
Passing as a young, white man causes a multitude of challenges for Jess, who has to maneuver through relationships with the militiamen she travels with, people she encounters on the road, and another shooter, Annette, with whom she forms a deep connection. And when she does reunite with her brother, she finds herself fleeing the same militiamen who helped her find him. An outlaw herself—she finally realizes—she sinks deeper into the violence that is both her salvation and undoing. But also for the first time in her life, she finds home, family, and even love as she rises to become a hero in her own right.
Told in Jess’s unforgettable voice, Whiskey When We’re Dry is an epic is as expansive as America itself—and weaves together the complex web of stories and characters that contributed to its formation.

1. This book takes place in the “Wild West,” but centers on characters who have not been commonly featured before. How did Whiskey When We’re Dry challenge your perspective on the American West?

2. As Jess travels farther from home, she relies on her sharpshooting skills to stay useful to Governor and to keep her safe—but as the book progresses, she is forced to become an outlaw. At what point do you think Jess starts to question her identity as a result of her actions?

3. Jess dresses as a man first for protection while out riding, but soon feels more at home as Jesse than she did as Jessilyn. How do you think this act of “passing” contributes to her sense of identity?

4.  Jess’s voice is one of the most distinctive parts of the novel. Did reading the book told from her perspective ground you in the time period?

5. Jess learns how to read using the Bible, and scrawls “put on the full armor of God” into their dining table after Pa dies. Yet she seems to hold a skepticism for religion that only grows through the book. Discuss what faith does for the characters in the book: Pa, Jess, Noah, Constance? The Wild Bunch? What does Annette believe? How does faith contribute to the climatic events of the novel?

6. Much of the crime depicted in the novel is familiar to other narratives from this time period. Yet Noah and his Wild Bunch have a Robin Hood–like view of themselves, and we come to see much of the violence as a result of an unstable and unequal economy and distribution of wealth. How does this square with stories often told about the West?

7. In many ways, the central relationship of the book is between a girl and her big brother, beginning with him helping raise her and ending with her sacrificing herself for him and his family. How does their relationship change over the course of the book? What are the big turning points in it?

8. When Greenie sees Jess at the end of the book, he has a choice: do what he has been sent to do, or let her ride free. Why do you think he makes the choice he does?

9. In a certain sense, Jess’s search for her brother Noah was also a journey to recover her home. Do you think Jess finds herself “at home” at any point after leaving the family’s ranch? If so, where and with whom?

10. By the end of the novel, Jesse has earned the title of “ruthless outlaw.” Do you think Jesse has become a villain or a hero? After finishing the novel, how would you define these terms?

The Fires of Spring

Welcome to Hard Times
Back to Top