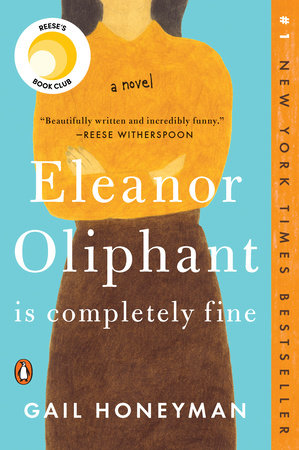 An Introduction to Eleanor Oliphant Is Completely Fine

Twenty-nine-year-old accounting clerk Eleanor Oliphant tends to stick to her routine: work all week, buy a supermarket pizza and two bottles of vodka on Friday, and spend the weekend alone in a drunken stupor waiting for Monday to arrive. Eccentric, awkward, and judgmental, Eleanor might sound like the very definition of an antiheroine, yet in debut author Gail Honeyman’s hands, she is refreshingly honest and utterly relatable. With a sharp, albeit unintentional sense of humor and a deeply flawed self-image that makes her all the more sympathetic, Eleanor Oliphant has become one of the most lovable characters in recent fiction—and her creator, Gail Honeyman, has become one of the most celebrated new authors on the international literary scene.

As the novel begins, Eleanor is an opinionated young woman who makes sweeping and often laugh-out-loud pronouncements on everything from duffle coats to bikini waxes. But what first appears to be the narrative of a prudish and harmless loner soon gives way to reveal darker undercurrents, from Eleanor’s childhood in foster homes to an adulthood punctuated by abusive phone calls from her absent mother. In fact, entire years seem to be missing from Eleanor’s past, and ominous memories rise up which she can’t explain to anyone, most of all to herself.

Two events, however, begin to coax Eleanor out of her shell. First, she develops an unexpected crush on a local musician, Johnnie, and, despite never having met him, she embarks on an imaginary love affair—convinced they have a future together. Second, Eleanor and her colleague Raymond rescue an injured elderly man, Sammy, and this act of kindness sets off a ripple effect in which she both builds a relationship with Sammy and his family and forges a friendship with Raymond. Eleanor may be tone-deaf to social convention, but with Raymond’s bemused guidance, she begins to imagine leading the kind of normal life that she never thought possible before.

But just when Eleanor begins to feel truly happy, she discovers the crushing truth about her beloved singer, and her broken fantasy sends her into a spiral of depression and self-harm. Thankfully, Raymond’s friendship saves Eleanor from herself, in ways large and small, and at his urging, she agrees to see a counselor. As she begins to heal, her past is revealed to her in its entirety—and a stunning twist casts the events of the novel in a brand new light.

1. Knowing the truth about Eleanor’s family, look back through the book to revisit her exchanges with her mother. Did you see what was ahead? How did Honeyman lay the groundwork for the final plot twist?

2. What are the different ways that the novel’s title could be interpreted? What do you think happens to Eleanor after the book ends?

3. Eleanor says, “These days, loneliness is the new cancer—a shameful, embarrassing thing, brought upon yourself in some obscure way. A fearful, incurable thing, so horrifying that you dare not mention it; other people don’t want to hear the word spoken aloud for fear that they might too be afflicted” (p. 227). Do you agree?

4. What does Raymond find appealing about Eleanor? And why does Eleanor feel comfortable opening up to Raymond?

5. Eleanor is one of the most unusual protagonists in recent fiction, and some of her opinions and actions are very funny. What were your favorite moments in the novel?

6. “Did men ever look in the mirror, I wondered, and find themselves wanting in deeply fundamental ways? When they opened a newspaper or watched a film, were they presented with nothing but exceptionally handsome young men, and did this make them feel intimidated, inferior, because they were not as young, not as handsome?” (p. 74). Eleanor’s question is rhetorical and slightly tongue-in-cheek, but worth answering. What are your thoughts? If men don’t have this experience, why not? If they do, why is it not more openly discussed?

7. Eleanor is frightened that she may become like her mother. Is this a reasonable fear? What is the balance of nature and nurture?

8. Is it possible to emerge from a traumatic childhood unscathed?

9. Eleanor says, “If someone asks you how you are, you are meant to say FINE. You are not meant to say that you cried yourself to sleep last night because you hadn’t spoken to another person for two consecutive days. FINE is what you say” (p. 226–227). Why is this the case?

The Hypnotist’s Love Story
Back to Top