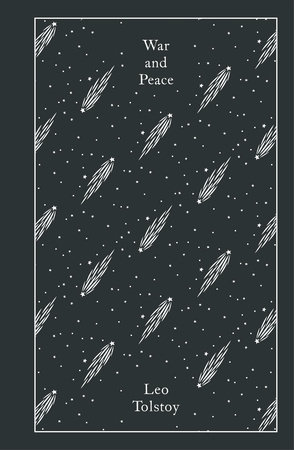 INTRODUCTION
Leo Tolstoy said, “It is not a novel, even less is it a poem, and still less an historical chronicle.” Henry James ranked it among those “large loose baggy monsters” and added, “Tolstoy is a reflector as vast as a natural lake; a monster harnessed to his great subject—all human life!” But whatever we call it, War and Peace is an astonishing work—a book that incorporates historical characters, vivid battle scenes, several love stories, shrewd glimpses of everyday life, an examination of Western ideas and the Russian soul, and a disquisition on the nature of history itself, among other things. It is at once a book of ideas and an epic portrait of ordinary life amid extraordinary circumstances.

Pierre Bezukhov and Prince Andrey Bolkonsky, are the book’s central characters, but their stories are just two of many threads. Pierre, big, clumsy, and big-hearted, is a naïve searcher after big truths—a French-educated liberal who unexpectedly inherits a title and great wealth, gets pushed into a disastrous marriage, dabbles in Freemasonry, becomes obsessed with assassinating Napoleon, and finally finds a measure of peace in the stoic, here-and-now outlook of a saintly peasant.

Andrey is Pierre’s friend, but almost his total opposite. Though strongly impelled to do good, Andrey possesses a cold, cynical intelligence that sees through the self-serving pretensions and illusions of the men he encounters at court and in the army—not to mention those of his tyrannical father and pious sister. He is incapable of playing politics or indulging in sentimental delusions; he would rather do his duty, fight—and die. It is only in his wrenching love affair with Natasha Rostov—sparked by her incandescent spirit, interrupted by a bitter scandal, and then rekindled as he lies dying—that Andrey finds hope and, ultimately, a kind of transcendence.

The Rostov family—Natasha, her brother Nikolay, and her parents—are the book’s other chief characters. They are a seemingly ordinary lot—the father is a sentimental spendthrift, Nikolay a gung-ho cavalryman, and Natasha a spirited naïf. Yet their open-hearted goodness, their innate patriotism, their love of simple pleasures—balls, parties, banquets, hunts, sleigh rides, folk dances—and their heartfelt delights and sorrows offer an ordinary Russian counterweight to the troubled ruminations and erratic peregrinations of Pierre and Andrey.

Napoleon’s invasion of Russia—the historical event at the heart of the novel—irrevocably transforms the lives of all of these characters. For some—Andrey and Natasha’s brother Petya, along with many thousands of others—the invasion puts an abrupt end to all dreams of the future. For others—Pierre and Natasha, Nikolay and Andrey’s sister Marya—the invasion brings much dislocation and sadness, but ultimately offers them a second chance at happiness. Like Napoleon, who falsely believes he is directing history, and like General Kutuzov, who wisely lets history direct him, they have all been caught up in a mysterious sweep of people and events—a historical tide that has pushed them inexorably toward a fate that is at once completely determined and utterly surprising.

Leo Tolstoy was born in central Russia in 1828. He studied oriental languages and law (though he failed to earn a degree in the latter) at the University of Kazan and, after a dissolute youth, eventually joined an artillery regiment in the Caucasus in 1851. He took part in the Crimean War, and the Sebastopol Sketchesthat emerged from it established his reputation. After living for some time in St. Petersburg and abroad, he married Sophie Behrs in 1862 and they had thirteen children. The happiness this brought him gave him the creative impulse for his two greatest novels, War and Peace (1869) and Anna Karenina (1877). Later in life his views became increasingly radical as he gave up his possessions to live a simple peasant life. After a quarrel with his wife he fled home secretly one night to seek refuge in a monastery. He became ill and died during this dramatic flight, at the small railway station of Astapovo, in 1910.

A Passage to India
E. M. Forster
Back to Top