The Clouds Beneath the Sun Reader’s Guide 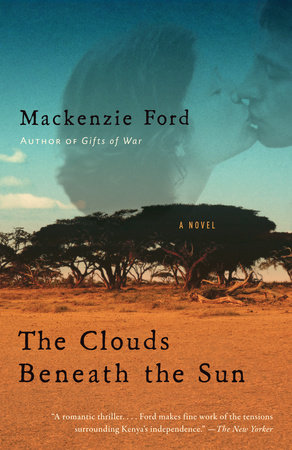 The Clouds Beneath the Sun Reader’s Guide

print
The Clouds Beneath the Sun Reader’s Guide

The startling beauty of the Kenyan setting, the tension of loom­ing social upheaval, and the dizzying highs and crushing lows of a doomed love affair are all brilliantly captured in this extraordinary and utterly unforgettable novel. The following questions are intended to enhance your reading experience and to generate lively discussion among the members of your book group.

Mackenzie Ford (a nom de plume) was introduced to readers in 2009 with the publication of Gifts of War, which was praised in USA Today as “an absorbing, morally complex read.” In a starred review, Library Journal said, “Ford keeps the reader on a knife’s edge as the lies build and the truth is only a word or misstep away. Highly recommended.”

Now Ford takes us to Kenya in 1961. As a small plane carrying Natalie Nelson lands at a remote airstrip in the Serengeti, Natalie knows she’s run just about as far as she can from home. Trained as an archeologist, she accepted an invitation to be included in a famous excavating team, her first opportunity to escape England and the painful memories of her past.

But before she can get her bearings, the dig is surrounded by controversy involving the local Masai people—and murder. Compounding the tension, Eleanor Deacon, friend of the Masai, who is leading the excavating mission, watches a rift grow between her two handsome sons. Natalie’s growing attrac­tion to Jack Deacon soon becomes a passionate affair that turns dangerous when she must give evidence in a trial that could spark even more violence and turmoil.

The startling beauty of the Kenyan setting, the tension of loom­ing social upheaval, and the dizzying highs and crushing lows of a doomed love affair are all captured brilliantly on every page of this extraordinary and utterly unforgettable novel.

1. Throughout the novel, Natalie is described as being physically beautiful, and is almost universally regarded as such by the novel’s men. But Natalie herself seems somewhat conflicted about her beauty and the way it can complicate her professional advancement and life in camp. In your view, is Natalie’s beauty more of a hindrance to her or an asset?

2. Eleanor states that she agrees with T.S. Eliot that “one aim in life is to escape our families, our childhood, not be conditioned by them.” Discuss the role family plays in the novel, considering specifically the Deacon family, the Nelson family, and the Masai families of Mgina and Mutevu. Do these cases support Eleanor’s view of family as a restriction on the individual, or is family a source of strength and comfort?

3. Discuss the role of politics in the novel, specifically the way science is politicized. Who seems to be the most successful political tactician in the novel? Does the scientific work suffer as a result of political interference? Do you think the same is true in today’s world?

4. Discuss Eleanor Deacon as a character. Is she too authoritarian, as her critics claim? Do the ends achieved justify the means she employs?

5. During the trial, Natalie must make a very complex choice between upholding her values and salvaging her personal and professional life. In the end, the resolution is a compromise of sorts, in which her testimony about the night in question is correct but she is not completely truthful on the stand. Do you think she chooses correctly? Does she behave admirably? What would you have done in her place?

6. How does Natalie develop as a character over the course of the novel? How does her thinking, her way of seeing the world, change as a result of her experiences? Is she a better person at the end, or has she in some ways strayed from the values she so clearly holds dear?

7. The overarching legal conflict in the novel is one between Masai tribal law and Western law transplanted by British colonization. In the circumstances in the book, which do you think should take precedent? What measures has the contemporary world taken to address conflicts of legal custom, and are those measures successful?

8. The nature of Christopher’s involvement in the plane crash is left ambiguous, but what do you think? Was it an accident, or a deliberately lethal act of sabotage?

9. In the end, were you surprised that Jack and Natalie did not come together? In light of all they have gone through, and how strongly they feel for one another, is Jack’s interest in having children really cause enough for the two to part ways? Or is Natalie’s decision really a noble sacrifice on her part, a true act of love?

(For a complete list of available reading group guides, and to sign up for the Reading Group Center enewsletter, visit www.readinggroupcenter.com.)

Mackenzie Ford, author of Gifts of War, is the nom de plume of Peter Watson, a well-known and respected historian whose books are published in seventeen languages. He was educated at the Universities of Durham, London, and Rome, and his writing has appeared in the New York Times, the Los Angeles Times, and numerous publications in the United Kingdom. Since 1998 he has been a Research Associate at the McDonald Institute for Archaeological Research at the University of Cambridge.

Learn More About The Clouds Beneath the Sun
print

The Book of Esther

The Garden of Ruth

The Book of Color

The Passages of H.M.
Back to Top