The Lay of the Land Reader’s Guide 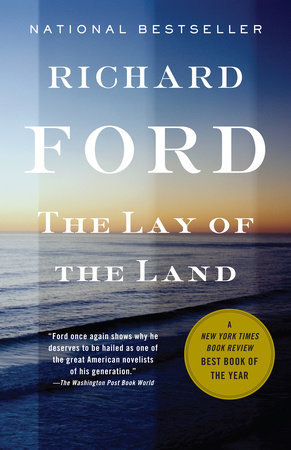 The Lay of the Land Reader’s Guide

print
The Lay of the Land Reader’s Guide

“Ford once again shows why he deserves to be hailed as one of the great American fiction novelists of his generation.”
—The Washington Post Book World

The introduction, discussion questions, suggestions for further reading, and author biography that follow are meant to enliven your group’s discussion of Richard Ford’s abundant, funny, sorrowful, and miraculously observed new novel, The Lay of the Land.

In The Lay of the Land, the author reintroduces readers to Frank Bascombe, the protagonist of his earlier novelsThe Sportswriter and the Pulitzer Prize–winning Independence Day. He is a man of mild aspect and strong, sometimes violent feelings, capable of kindnesses both diligent and spontaneous but also of flashes of cruelty and contempt. A native Southerner transplanted to Michigan, the New Jersey suburbs, and lately the beach town of Sea-Clift (“NEW JERSEY’S BEST-KEPT SECRET”); a one-time novelist turned sportswriter and then realtor; a survivor of a divorce, the father of a dead son: Frank is living testimony to the infinite renewability of American life (just as his career speaks of the infinite renewability of American real estate). But Frank doesn’t want any more renewal. At 55, he’s entered the Permanent Period, the “end to perpetual becoming, to thinking that life schemed wonderful changes for me, even if it didn’t. It portended a blunt break with the past and provided a license to think of the past only indistinctly (who wouldn’t pay plenty for that?)” [p. 54].

But as he prepares for the Thanksgiving weekend of the year 2000 and braces himself for the aftershocks of an inconclusive presidential election, Frank worries that his Permanent Period may be coming to an end. His wife Sally has left him for her first husband, who was supposed to be dead; his first wife, Ann, has decided that she’s in love with him, again or still; his prostate has sprouted cancer, which is being treated with radioactive BBs, and even his daughter Clarissa, who faithfully shepherded him through his procedure and recovery, is switching sexual preference. Add the ill-considered business plans of his Tibetan business partner, the imminent arrival of his eccentric surviving son, and a bomb going off at the hospital where he likes to eat lunch, and you can understand why Frank would rather skip Thanksgiving, why he might rather skip everything.

The fact that he doesn’t—that he shows up for every painful and absurd event of this dizzyingly eventful novel and reports them all in a voice as confiding, expansive, and laugh-out-loud funny as any in American fiction—is something to be grateful for. Happy Thanksgiving.

1. What do you make of the story that opens the novel: that of the community college teacher who, before being gunned down by one of her disgruntled students, was asked if she was ready to meet her maker and replied “Yes. Yes, I think I am” [p. 3]. Why is Frank so riveted by this question? How does he think he might answer in similar circumstances? What does he mean when he says that “It’s not a question . . . that suburban life regularly poses to us. Suburban life, in fact, pretty much does the opposite” [p. 4]? Is he right? How do the themes of death, self-accounting, and the terrifying randomness of the American berserker recur throughout The Lay of the Land?

2. What does Bascombe mean by the “Permanent Period?” When does he seem to have entered it, and what events threaten to evict him from it? How serious is he when he speaks of its pleasures? In the scheme of this novel, is permanence the same thing as happiness? As resignation?

3. The Lay of the Land is set during Thanksgiving, as The Sportswriter takes place at Easter and Independence Day over a July 4th weekend. How does the holiday figure in the novel? How does Frank feel about it, and how do the other characters appear to be celebrating it? Discuss the novel’s exploration of themes like gratitude, family, and abundance—as well as the ambiguous meaning of “pilgrim.”

4. What role does politics play in this novel, which occurs during the long, inconclusive hangover of the 2000
presidential election? How does Frank feel about the nation’s current state of affairs? How do the other characters feel, and to what extent are they characterized by their politics? How does the outcome (or non-outcome) of the vote mirror events in Frank’s personal life?

5. What has prompted Frank to become a Sponsor, a member of a group “whose goal is nothing more than to help people” [p. 12]? What sort of help does he have in mind, and how does that correspond to what is actually asked of him on his one Sponsorial visit? What does he get from his voluntarism, and how do the services he performs as a Sponsor compare to his kindnesses as a friend, business partner, father, or husband? How do they highlight his failings and deficiencies? What does the very existence of an organization like Sponsors suggest about
American—or at least New Jerseyan—society in the year 2000?

6. What is the significance of Frank’s career as a realtor? Which of his character traits does it bring into relief? How does it cause him to see the landscape and houses around him, and how does it cause other characters to see him? What does “home” mean to a realtor, who makes his living selling them? What might “home” mean to Frank’s partner Mike Mahoney (né Lobsang Dhargey), whose original one was in Tibet? Is home, as Frank can’t keep from going back to, though the air there’s grown less breathable, the future’s over, where they really don’t want you back, and where you once left on a breeze without a rearward glance” [p. 14]?

7. Mike Mahoney’s name, career-track, and politics suggest a core sample of the American bedrock, except that, as previously mentioned, he happens to be a Buddhist from Tibet. Has the American archetype become someone who was once somebody (or something) else? In what ways are Mike and Frank similar? Are Ford’s characters constantly becoming new people or simply building additions onto an original structure? And, if Mike represents a paradigm in this novel, what do you make of Ann’s statement, “We just have to be who we are” [p. 377]?

8. Frank is a cancer survivor, a category whose ambiguity may be surpassed only by the “suicide survivors” that so confuse Mike. How does Frank feel about his condition, and particularly about where it has chosen to turn up in his body?

9. What sort of father is Frank? Which of his surviving children does he favor and for what reasons? To what extent is he still haunted by the death of his first son? Why is he so unnerved when Clarissa, who only yesterday was a straightforward lesbian, brings home a male “friend”? What might account for Frank’s embarrassment and irritation toward his son Paul and Paul’s occasional fury at him? Is Paul right when he accuses his father of “hold[ing] everything . . . down” [p. 396]?

10. How does Frank relate to the women in his life? What sort of husband has he been? How does he react to Ann’s admission that she still loves him? How has he dealt with his desertion by Sally, and to what extent may he have been complicit in it? (What might it mean when your wife leaves you for a dead man?) What do you make of his Sponsorial call to Marguerite Purcell and of the fact that it transpires without either person alluding to their long-ago sexual fling?

11. For all his relationships, Bascombe seems to be a fundamentally solitary figure. Is this because Ford embeds us so deeply in his consciousness that we experience the essential aloneness that is the hallmark of all consciousness or because Frank really is solitary? What traits or circumstances might make him so?

12. As its title suggests, The Lay of the Land is very much a novel about place. How does Bascombe view his neck of New Jersey? How do his observations about strip malls, McMansions, road houses, and human tissue banks illuminate Bascombe’s character? How do they comment on the novel’s action? Does Bascombe loathe the uniformity and ugliness of this environment, or are his feelings about them more complex? Are the author’s? What is the significance of the fox that appears in one of the book’s final scenes?

13. E. M. Forster famously summed up the difference between story and plot as follows: “‘The King died, then the Queen died’ is the story. ‘The King died, then the Queen died of grief’ is the plot” [Aspects of the Novel, chapter 5]. What is it that makes the seemingly haphazard events in this novel cohere into a plot? What is the relation between that plot’s hinges (Frank’s cancer, Sally’s departure, Ann’s confession, Clarissa’s disappearance, and Paul’s arrival, not to mention the shattering denouement) and its seemingly incidental moments?

14. Frank is both the novel’s protagonist and its narrator. Every perception and event is filtered through his voice. How would you characterize Frank’s voice? In what ways does it combine the casual and the literary, the comic and the tragic?

15. Because The Lay of the Land deals with ordinary people engaged in ordinary life in an environment that most readers will find familiar, it is tempting to see it as a miniaturist novel. But its length, its eventfulness, and the sheer, exuberant density of its observations suggest that it is also a work of fictional maximalism like Bellow’s Herzog or Joyce’s Ulysses (to which it sometimes alludes). Discuss these approaches to fiction and the ways that Ford reconciles, or navigates, between them.

Richard Ford was born in Jackson, Mississippi, in 1944 and attended the University of Michigan and the University of California at Irvine, where he received an MFA. He is a recipient of the Pulitzer Prize and the PEN/Faulkner Award for his novel Independence Day and the PEN/Malamud Award for short fiction. He is the author of A Piece of My Heart; The Ultimate Good Luck; The Sportswriter; Rock Springs; Wildlife; Women with Men; A Multitude of Sins; and Vintage Ford, a selection of his writing. His work has been translated into sixteen languages. He lives in Maine and New Orleans.