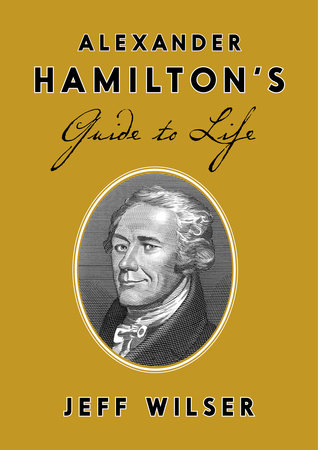 “I have long thought that a book was needed to link Hamilton’s real-life experiences to present-day situations. In Alexander Hamilton’s Guide to Life, Jeff Wilser finally offers just that. Using a 21st century sensibility to bring 18th century history to life, Wilser has written a modern-day guide that’s both entertaining and effective. I enjoyed this book as a baby boomer and think that Generation X, Y, and Z readers will love it as well.”
—Douglas Hamilton, the fifth great-grandson of Alexander Hamilton

A compelling and immediately accessible look at the life and wisdom of Alexander Hamilton, the Founding Father who mastered the arts of war, wealth, and wit long before becoming the subject of the runaway Broadway hit Hamilton: An American Musical. Wilser takes a fun, fresh approach to Hamilton, using humor to reach students with “lessons” in leadership, money, and even romance that the Founding Father himself might have imparted to today’s younger generation.

JEFF WILSER is the author of four books, including The Good News About What’s Bad for You . . . The Bad News About What’s Good for You, named by Amazon as one of the Best Books of the Month in both Nonfiction and Humor. His work has appeared in print or online at GQ, Esquire, New York magazine, Glamour, Cosmo, Mental Floss, MTV, and The Huffington Post. His TV appearances have ranged from BBC News to The View. Wilser lives in New York.

2. Review the chapter titles as a group or individually. Choose a chapter to make predictions or inferences on the part of Hamilton’s life to be discussed (or, for a visual alternative, review the pictures at the beginnings of each chapter). Use an organizer to keep track and reflect back later.

CCSS.ELA-LITERACY.RH.9-10.1
Cite specific textual evidence to support analysis of primary and secondary sources, attending to such features as the date and origin of the information.

CCSS.ELA-LITERACY.W.9-10.1
Write arguments to support claims in an analysis of substantive topics or texts, using valid reasoning and relevant and sufficient evidence.

1. Analyze Hamilton’s decision. Do you think it was best for the country? What would you have done in that same time period? Create an alternate solution and hypothesize the reaction of the country—both short-term and long-term.

2. Write a letter to Hamilton that agrees or disagrees with one of his decisions.

3. With partners, create a cost-benefit analysis for one of Hamilton’s decisions. Itemize the list with at least six costs or benefits to help evaluate the decisions made. Individually, write an essay response with at least three reasons why you agree or disagree with Hamilton’s decision. Once completed, create a poster that would persuade Hamilton to agree with you.

4. Create an alternative ending to Hamilton’s life. Write a story for the next ten years of his life, using proper historical themes of time and place.

5. Hamilton wrote his way out of a lot of situations. Create an alternative situation where
Hamilton’s writings didn’t save him.

6. Create a children’s picture book of Hamilton’s life. Choose at least six important events to illustrate Hamilton’s role in our early government. Make sure the pictures use at least half a page and the content is age appropriate for kindergarten to grade 5.

1. Hamilton was a fan of maxims, which are highlighted at the beginning of each chapter. Which is the most relevant to today’s society?

2. Hamilton wrote “Speak with authority . . . even if you have none.” Cite textual evidence of this maxim from Chapter 1. Create an inference of the success or failure of the maxim.

3. Do you agree with the author on Hamilton’s birthday? Why or why not?

4. Knowing Hamilton’s passion for books and learning, do you think it was an easy decision for him to drop out of college and join the war? Do you agree with his decision?

5. Hamilton refused his pension from war service and any other income while holding office. Make inferences on the effects of this later in his life.

CCSS.ELA-LITERACY.RI.11-12.7
Integrate and evaluate multiple sources of information presented in different media or formats (e.g., visually, quantitatively) as well as in words in order to address a question or solve a problem.

CCSS.ELA-LITERACY.RI.11-12.9
Analyze seventeenth-, eighteenth-, and nineteenth-century foundational U.S. documents of historical and literary significance (including the Declaration of Independence, the Preamble to the Constitution, the Bill of Rights, and Lincoln’s Second Inaugural Address) for their themes, purposes, and rhetorical features.

1. Hamilton died as a result of a duel with Aaron Burr. After hearing/viewing the lyrics from the musical, explain at least three reasons why the duel was carried out.

3. The Schuyler sisters play a prominent role in the musical and in Hamilton’s personal life. Investigate the true relationship between Hamilton and his sisters-in-law, looking for advice that Hamilton took from these women.

4. Hamilton was closely connected with the discovery and eventual sentencing of Benedict Arnold. He wrote several letters to his friends, including Laurens, about the situation. After reading the letters, determine Hamilton’s personal reaction and how it differs from modern opinions of Arnold.

5. After the Hamilton duel, Burr continued to be vice president. Research the remaining years of his life, detailing the trials and tribulations that would plague him.

6. After reading Hamilton’s final letter to Eliza, create a new song for the musical. Research what Eliza did for the remaining fifty years of her life and how Hamilton would have reacted.

Alexander Hamilton: A Resource Guide from The Library of Congress
www.loc.gov/rr/program/bib/hamilton/memory.html

TeachingAmericanhistory.org, an online resource for American History teachers and students

“As a history teacher, I find that my students often have a difficult time understanding the Founding Fathers, with their white wigs and passion against a king so far away. But in Jeff Wilser’s Alexander Hamilton’s Guide to Life I’ve finally found a way to relate history to my students. It is by far the best book I’ve ever seen to teach Hamilton, as well as the establishment of our government. Students will learn how Hamilton’s thoughts and ideas can be used in their own lives, and for the first time, they actually will be able to understand a Founding Father. And they’ll enjoy the humor along the way!”
—Jennifer Norato, State Chairman, Community Classroom Committee, New Jersey Daughters of the American Revolution

About the Guide Writer

JENNIFER NORATO is a middle school/high school teacher in New Jersey. Her love of Hamilton dates back to her Paterson family roots and her membership in the Daughters of the American Revolution. She also serves as the New Jersey Chapter President of The Alexander Hamilton Awareness Society, a nonprofit group dedicated to sharing the accomplishments of Hamilton with the world.

The Grammar of God
Aviya Kushner