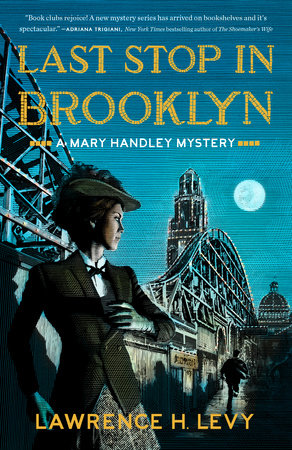 1. In order to provide reading groups with the most informed and thought-provoking questions possible, it is necessary to reveal important plot aspects of this novel. If you have not finished reading Last Stop in Brooklyn, we respectfully suggest that you wait before reviewing this guide.

Xenophobia plays an important part in this novel and remains very prominent in the news today. Are there any differences between the way foreigners were thought of and treated back then as opposed to the present? What are the similarities? What percentage would you say involved peoples’ fears, and how reasonable were those fears? How much of it was simply prejudice?

2. Austin Corbin was a real person who owned the Long Island Railroad, the two luxury hotels in Coney Island, and other holdings. His prejudice against Jews, Blacks, and foreigners is well documented. Is his bias any different from the biases of people today? If so, how is it different? What groups might he belong to if he lived today and why?

3. Was it obvious that Mary and Harper were attracted to each other when they first met? Why do you think it took so long for both of them, especially Mary, to admit they cared for each other?

4. Even though the word wasn’t invented at that time, would you call Leo a sociopath? Why? They used the word psychopath back then. Does Leo fit that description better and what is the difference between the two?

5. Harper has an experience with opium that puts him in a euphoric state. Do you think this is unrealistic or does it glorify opium use and why?

6. Chief Detective Byrnes stonewalls Mary as she continues to bring him more and more evidence of Ameer Ben Ali’s possible innocence. Was this attitude due to Byrnes’s ego, his belief in Ali’s guilt, his prejudice, or a combination of all three? Explain.

7. Carrie Brown and Ameer Ben Ali were real people. How much do you think public opinion and prejudices played in his conviction for her murder and why? Did apathy or hate toward the fate of a Black Arab man play a part?

8. Theodore Roosevelt was president of the police commission in New York for two years. Do you think he was portrayed realistically, and what did you think of his relationship with Mary?

9. Russell Sage was a real person. Though you may not have known much about him, his name is on many organizations and schools. How did his portrayal contrast with who you thought he was?

10. Almost everyone has heard of Andrew Carnegie. However, were you aware of his part in the Homestead Steel Strike and the South Fork Hunting and Fishing Club? If so, how did that affect your opinion of him? If not, does it change your opinion now and how so?

11. Mary finally got married. Do you think that was the right decision? Do you think she and Harper will be happy?

12. Mary and Sean’s relationship has continued to grow, becoming more friendly and supportive of each other. How did that happen?

13. Did Jeffrey Handley’s death surprise you and were you saddened by it?

14. Do you think Mary’s detective skills have grown? How so?

15. By the end of the book, Elizabeth Handley’s life has changed dramatically. How do you feel about her new outlook and her chances for success?

16. Edgar is an African-American man and his white employer, Arthur, is his friend, in spite of the fact that Edgar’s job is incredibly degrading. Do you think this relationship is realistic? Why?

The Letter Writer
Back to Top