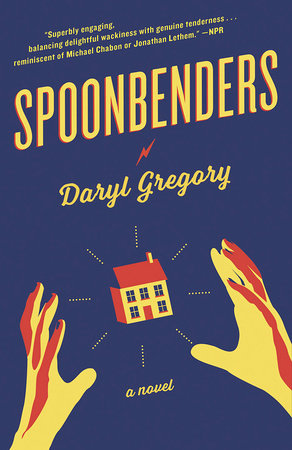 The introduction, author biography, discussion questions, and suggested reading that follow are designed to enhance your group’s discussion of Spoonbenders, an extraordinary new novel by Daryl Gregory.

1. What happens when the Telemachus family goes on Mike Douglas’s television show? What leads to the act not going as planned? What impact does it have on the family thereafter?

3. Why does Teddy refuse to invest in any of Frankie’s proposed ventures? What does Teddy believe is “the ultimate test of evolutionary fitness” (58)? How has Teddy succeeded in this test?

4. Why doesn’t Buddy speak most of the time even though he is able to? What is the question that haunts him the most? What does he mean when he thinks “Duty eats free will for breakfast”?

5. According to Teddy, what effect did “fear of the Russians” have on the U.S. government during the Cold War? What is the correlation between fear and gullibility?

6. What is “the great catch” in Irene’s ability? What might this suggest about truth?

7. After Maureen falls ill, she confesses to Teddy that she allied herself with a dissident Russian and reported false results to her government employer. Why did she choose to do this? Were her actions justified? Explain.

8. Why does Buddy take Frankie to the casino boat even though he knows what will happen to his brother? Where does Buddy go when he disappears?

9. Who is Archibald and what is his relationship to the Telemachus family? Is Archibald responsible for Maureen’s death as Frankie believes?

10. What does Maureen make Teddy promise before her death and why? Does Teddy honor his promise? Why or why not?

11. Are the Telemachuses’ powers ultimately beneficial or are they more of a hindrance or a curse? Discuss.

12. Despite their powers, what common problems or obstacles does the Telemachus family face? How do they resolve these issues? What seems to unite the family?

14. What are “the moment the future ends” (102) and “the Zap”? What favor does Buddy ask of his sister on the day the future ends? How is he changed as a result?

15. At the end of the story, where does Matty go? Who does he believe is his “partner in transparency” (479)? What does Matty ultimately realize navigation is an act of?

The Sky Is Yours

Vampires in the Lemon Grove

Get in Trouble
Back to Top