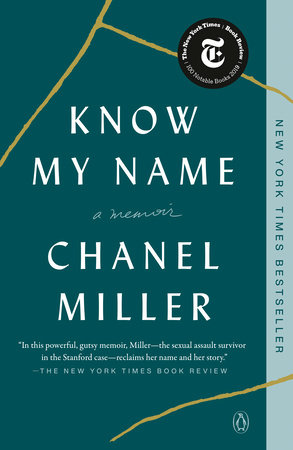 1. As Emily Doe, Chanel wrote a victim impact statement that went viral, reaching audiences around the world. Had you read her statement before reading her memoir? If so, how did that statement affect you?

2. Did you have any preconceptions about sexual assault prior to reading Know My Name? How has your understanding—of victims, perpetrators, or sexual assault itself—changed, if at all?

3. Chanel’s experience with even setting a date for the trial was extremely elongated and emotionally trying. Were you surprised to hear about her experience and that of the people closest to her? Has reading Know My Name affected your understanding of how sexual assault is approached by the law? Has your understanding of why someone doesn’t report assault changed?

4. On a similar note, what steps do you see colleges taking in response to sexual assault cases on their campuses? How can institutions create safer environments for students?

5. During her trial, Chanel was persistently asked targeted questions (about her clothing, her previous relationship with alcohol, her previous dating experience). Did her experience with sexism feel familiar to you? How so?

7. Chanel notes how differently she and Brock Turner were portrayed during the trial—he was lauded for his athletic ability, while she was reduced to a shadow of her whole self. The media focused on his future prospects and potential. Has Chanel’s experience affected how you might react to portrayals of victims and perpetrators in the future?

8. In some ways, Chanel’s closure was official: a jury delivered a guilty verdict. But not all of our experiences can be brought in front of a jury—and sometimes, when they can, the verdict is not in our favor. How do you find closure, or resolve an injustice done to you, when that’s the case? What might healing look like?

9. Chanel explains the separation between herself and Emily Doe. She details how vigilant she had to be to keep the experiences of these two halves of her apart, and how much harder it grew to do so—until one day she realized that Emily was an essential part of herself. Is there a part of you that you are ashamed of, or worry won’t be accepted, or fear will make people see you differently? Has Chanel’s story of self-acceptance given you an avenue to offer yourself the same? What empathy can you offer yourself today?

10. Chanel kept her assault a secret for a long time. Why did she fear coming forward? Have you ever withheld information to protect the ones you love? What would have to change for victims to seek help earlier?

11. Many of us think that rapists are strangers who jump out of bushes and attack in alleyways, when the reality is that the majority of cases involve a perpetrator the victim already knows. As Chanel says, “The friendly guy who helps you move and assists senior citizens in the pool is the same guy who assaulted me. One person can be capable of both. Society often fails to wrap its head around the fact that these truths often coexist, they are not mutually exclusive. Bad qualities can hide inside a good person. That’s the terrifying part.” Discuss why it’s difficult for people to hold these two truths.

12. Chanel details the daily harassment that so many women experience. Because it doesn’t involve physical violence, it’s often minimized and dismissed as no big deal. Why is it important to include these moments in a story about rape? What impact do they have? Did you find yourself reevaluating experiences in your own life?

13. Consent is often only talked about in the context of sex, when really it is a daily practice of respecting others’ privacy and personal boundaries. Where are examples of consent in day-to-day life that we can exercise? Talk about a time in your daily life when your personal space was not respected, and how you might have talked about consent in that situation.

14. Not only did the Swedes choose not to look away, they took action. If a friend says something offensive or off putting, it can be hard to voice disagreement, fearing that you will make others uncomfortable. How do we develop that courage in ourselves and others?

15. What role do race and class play in the criminal justice system? When the victim, or the accused, is a person of color, in what ways might it affect their experience or the way they are perceived in court?

16. Is there an instance in which you responded to another person with dismissal rather than empathy that you now regret? If you could change your response to them, what words or comfort would you offer now?
Learn More About Know My Name
print
Back to Top