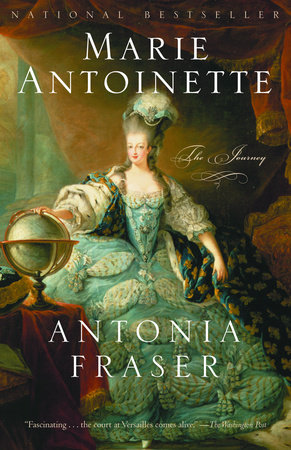 “Fascinating . . . the court at Versailles comes alive.” –The Washington Post

The introduction, discussion questions, and author biography that follow are intended to enhance your group’s reading of Antonia Fraser’s acclaimed biography Marie Antoinette: The Journey.

France’s beleaguered Queen, Marie Antoinette, wrongly accused of uttering the infamous “Let them eat cake,” was even before her death the subject of ridicule and curiosity; she has since been the object of debate and speculation and the fascination so often accorded tragic figures in history. Married in mere girlhood–sent away from her family and home in Austria to serve as “hostage,” “ambassador,” “womb,” “mother,” “Queen,” and “scapegoat” in Paris–this essentially lighthearted, privileged but otherwise unremarkable child was thrust into an unparalleled time and place, and was commanded by circumstance to play a significant role in history.

Fraser’s definitive biography excites compassion and regard for all aspects of her subject, immersing the reader not only in the coming-of-age of a graceful woman but also in the unraveling of an era.

Marie Antoinette: The Journey is an act of respect paid to a woman whose spirit was never defeated by all the sorrows heaped upon it, and whose most extraordinary impulses were thwarted by the extraordinary pressures of her time.

1. How important was Marie Antoinette’s childhood in Austria–historical enemy of France–in influencing her career? Would it ever have been possible for an Austrian princess to have a satisfactory life in France?

2. Was Marie Antoinette’s relationship with her mother, the Empress Maria Teresa, a damaging or a supportive element of her life?

3. Marie Antoinette’s marriage to the Dauphin, later Louis XVI, remained unconsummated for seven and a half years. What effect did this have on her character–and her relationship wth her husband?

4. Were the accusations of extravagance and frivolity leveled against Marie Antoinette justified–both during her own lifetime and since? Marie Antoinette was also the target of numerous vicious libels about her sexuality. What part did these libels played in blackening the image of royalty in France, and how valid were they?

5. Assess the political role of Marie Antoinette in the years shortly before the French Revolution: Should she have tried to influence Louis XVI more or was she correct to let history take its own course?

6. Marie Antoinette was a patron of the arts and a nature enthusiast. Is philanthropy an essential part of the royal role?

7. Once the French Revolution started, Marie Antoinette could probably have escaped by herself, or with her little son disguised as a girl. Instead she saw it as her duty to remain at the King’s side. Knowing that she was an unpopular queen, why did she make that decision?

8. Marie Antoinette’s courage and composure at her trial and execution aroused widespread admiration at the time, even from her enemies. How much had her character changed since her youth? Or were such qualities always latent in her personality?

Since 1969, Antonia Fraser has written many acclaimed historical works which have been international bestsellers. These include the biographies Mary Queen of Scots, Cromwell: Our Chief of Men, and King Charles II. Three highly praised books focus on women in history: The Weaker Vessel: Women’s Lot in Seventeenth-Century England, The Warrior Queens, and The Wives of Henry VIII. Her most recent book was Faith and Treason: The Story of the Gunpowder Plot. Fraser has received many literary awards, including the James Tait Black Memorial Prize. She is editor of the series of Kings and Queens of England. Antonia Fraser is married to Harold Pinter and lives in London.
Learn More About Marie Antoinette
print

Mistress of the Monarchy

Wedlock
Back to Top