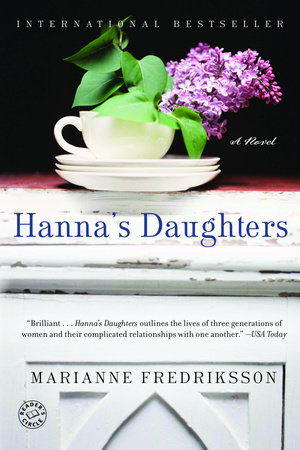 A #1 international bestseller in Europe, this luminous, heartfelt novel spans more than a hundred years in the lives of three remarkable women–a daughter, mother, and grandmother–lives shaped by the epic sweep of history and linked through a century of great love and great loss.

As Anna holds vigil at her mother’s bedside, she longs for reconciliation–not just with her mother, Johanna, but with her grandmother, Hanna, a woman she never really knew. Determined to piece together the fragments of her past, Anna sifts through tattered letters, cracked diaries, and old photographs, as the vivid lives of Hanna and Johanna at last begin to unfold.

Through shades of memory and history, longing to join the ancient threads of the family tapestry, Anna begins searching for answers to questions that have haunted her for a lifetime. What was it like for her grandmother, Hanna, more than one hundred years ago, when she married a miller and raised an illegitimate child in a staunch, rural community? What drove Anna’s own mother, Johanna, once a fiery revolutionary, to settle down and become a housewife? And why did the ties binding Anna to her mother and grandmother drive all three apart–only to bring them back together again?

Rich in insight, and resonating with truth and revelation, Hanna’s Daughters is an unforgettable story, exploring the volatile ties of mothers and daughters. If you have ever wanted to connect with the past, or rediscover family, this novel will strike a chord in your heart. Marianne Fredriksson has created nothing short of a masterpiece.

1.         Regarding the notion of psychological inheritance, the author states in the foreword that “we inherit patterns, behavior, and ways of reacting to a much greater extent than we like to admit. It has not been easy to take this on; so much was ‘forgotten,’ disappearing into the subconscious when grandparents left farms and countryside where the family had lived for generations.” In your opinion, and drawing from your own experiences, what is the “forgotten” that the author speaks about?

2.         What are some psychological patterns and behaviors that women of your generation have “inherited”? Are they at odds with your ambitions and desires? Why or why not?

3.         Which of the main female and male characters did you most easily identify with? Why?

4.         Have your ever traced your family history before, or had a friend or relative who has? Share the experience.

5.         John Broman describes Hanna as “heathen and witchlike.” Do you think that her superstitious nature is just about her fears and insecurities, or does she, like her daughter and granddaughter, have a special sense of things? Is it possible that, because she wasn’t educated, her intuitiveness just expresses itself in this way? In that vein, what kind of woman do you think Hanna would have become had she been a part of Johanna’s or Anna’s generation?

6.         Do you feel that any of the women achieved genuine fulfillment in their marriages? Why or why not?

7.         In Anna’s cathartic letter to her mother, she writes that Hanna was the strongest of the three women, that she had “sense and continuity” and was a “realist,” who “lived as she believed.” Do you agree with Anna’s assessment? In what respects was Hanna more of a realist than her daughters? If you were to write this kind of letter to your mother, what would you tell her?

8.         In the last line of this letter, Anna writes, “I’ve learned a great deal, though, and I’m damn well not going to do what you did, Mother, give up when the truth collapses into a thousand truths.” What do you think Anna means by this? How has Johanna given up? What is the truth Anna speaks of?

9.         In Johanna’s story, we learn that Hanna offered to help Johanna raise her daughter and assured her that she didn’t need to marry Arne. Does this seem an uncharacteristically modern attitude for Hanna, especially for a woman who suffered firsthand the shame of having a child out of wedlock? Why do you think she so adamantly maintains that Johanna doesn’t need a husband, despite her own experience?

10.         Anna believes that she is much stronger than her mother and has not “been bowed into total dependence.” Has Anna really achieved emotional independence? Why or why not?

12.         Johanna mentions that the writer Selma Lagerlof had a huge impact on her and her girlfriends in the 1920s–that she dangerously shaped their expectations of love and happiness. Is there a particular book, movie, or figure that affected you–or your generation–in this way?

13.         Aside from the great influence of family, each of these women has been significantly shaped by the spirit of her time and generation. Which do you think shapes us more–our personal, family history or the generation to which we belong? Why?

The Sisterhood of Blackberry Corner

Oh My Stars
Back to Top