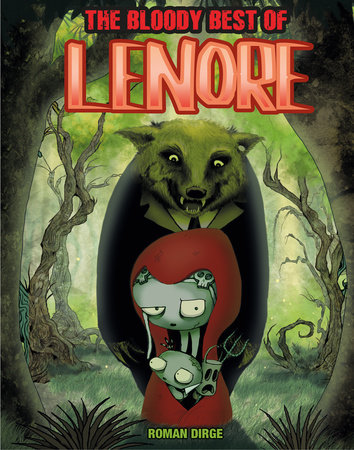 The Bloody Best of Lenore

About The Bloody Best of Lenore

Celebrate 25 glorious years of Lenore (The Cute little Dead Girl) with Roman Dirge’s The Bloody Best of Lenore – a selection of Lenore’s funniest and most manically silly adventures collected together for the first time in a special hardcover edition!

“I like the way Roman Dirge draws stuff.” – Neil Gaiman

“Roman Dirge has the best imagination this side of Tim Burton.” Caroline Thompson, writer, Nightmare Before Christmas, Edward Scissorhands

“You can’t help but love these characters and the ridiculous antics they get themselves into.” – Horror Talk

“Cute, cuddly, terrifying, gross, hilarious and brilliant all at once.” – Geek Syndicate

“It’s hilarious in all the wrong ways – which are, of course, the best ways.” – Critical Blast

“If you enjoy shows such as Family Guy, or some of the Adult Swim stuff that’s doing the rounds at the moment, then you will love this charming, macabre and very funny collection.” – Curiosity of a Social Misfit

“If Tim Burton, Edgar Allan Poe, The Cure’s Robert Smith, and the creative team behind South Park getting together to hash out ideas for a collaborative Seussian “childrens” book sounds like a match made in Heck to you, then this is the comic you’ve been praying for.” – Pop Mythology

“The book is yet another winner — one of indie comics’ most criminally underrated/under-the-radar/unknown series, in my opinion.” “He’s a master of comic timing — not easy to do in a static format — and visually, somehow manages to make many of his panels pop off the page with movement.” – Bookgasm

The Bloody Best of Lenore