Someone We Know Reader’s Guide 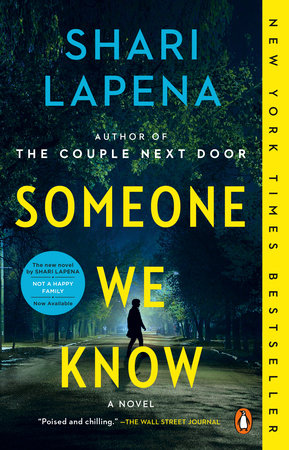 Someone We Know Reader’s Guide

print
Someone We Know Reader’s Guide

1. Olivia is mortified by her son Raleigh breaking into neighbors’ houses. Do you think the apology letters were a bad or good idea? To what degree should parents feel or be held accountable for the actions of their children? Discuss.

2. Both Glenda and Olivia want to protect their sons from the consequences of their actions. Do you see a theme here? Should parents “step in” or “step back”? Why or why not?

3. Do you think the relationship between Olivia and Glenda is one of true friendship, or something more layered? Can you be a true friend to someone who is hiding a big secret?

4. Suspicion and betrayal are a constant thread in Someone We Know. Is anyone in the book true to anyone else?

5. Olivia, Glenda, Raleigh, Becky, Carmine, Paul, Keith, and Larry are just some of the characters in the novel. Which character did you connect with the most? Who did you sympathize with?

6. Psychological thrillers like to toy with the characters’ and the readers’ perceptions. Where did your sympathies lie as the story unfolded? How did they shift as the story progressed?

7. Thrillers love to ask the question: How well do we ever really know anybody? Do you think people in real life harbor as many secrets as they do in fiction? How far do you think fiction strays from real life, or do you think truth is actually stranger than fiction? Discuss.

In Someone We Know, Raleigh, a teenage boy, is the person of interest in a series of home break-ins. What was your inspiration for the book, and how does it compare to your previous thrillers?

It was inspired by something I saw on the internet about a kid breaking into someone’s house in the middle of the night to use their wi-fi. I guess he’d had his own wi-fi restricted at home. It got me thinking about what a teenage boy might do, and what the repercussions might be. I knew the boy had to stumble onto something big—I needed a murder. It’s always easy to come up with a dead body—it’s how that dead body got to be there that’s more difficult, and a lot more interesting. That’s where the story comes in. In many ways, Someone We Know is similar to my other thrillers—it’s fast paced, it’s twisty, and you want to get to the bottom of it all. But this one also focuses on whole families, on parents and sons in particular, rather than focusing only on couples. It feels richer and deeper to me in that way.

Which character in Someone We Know did you have the most fun creating? Which one was the most challenging to write?

For fun, I’d have to say Raleigh, because he’s a teenager who’s got himself into a world of trouble. He’s a likeable mess, so you have to feel for him.

The most challenging character to write was probably Robert Pierce, because it’s always tricky to get a probable psychopath just right.

The one I liked best was Olivia, Raleigh’s mother. I feel for her, I really do.

What is your process for developing characters? Are any of these characters based on anyone you know?

I never base a character on any particular person, although I’m sure I take the occasional trait here and there from different people I see and incorporate them into my characters. I develop characters organically; I put a character into a particular situation—usually a difficult one—and see what they do and say. They grow and develop as the story goes on and they face ever greater challenges. There’s no better way to learn about your characters than to put them in a situation of conflict and see how they react. For me, it’s much better than creating a chart with eye color and shoe size and how they take their coffee—although that would help to keep the details straight!

Do you know at the beginning who the killer will be or do you decide as you write?

No, I don’t know who the killer will be at the outset, but I know it has to be one of several people. I start with a situation with a lot of possibilities, one that can go in many different directions, and then, as I develop all the threads, and as I come to the end, the best answer presents itself.

Your plots have many twists. How do you come up with these plot turns? Do you plan everything out beforehand or do you see where the story takes you?

The plot twists come instinctively, I guess. I don’t plan a novel out ahead and then write it. I start with an exciting premise, and I get inside the characters—they’re in a fraught situation, and they take things where they’re meant to go. I really believe that the unconscious mind is working all the time–that that’s where our ideas and creativity come from, and you have to be receptive to it. Practically speaking, I have to set up an interesting situation that could go in a lot of directions, with some characters with unknown backstories, so that these twists and turns can arise. Once I have my premise, I can get started and let things unfold as they will. Of course, I think about things as I go along, how the situation might become more complicated, more difficult for the characters, and the various ways it might be resolved.

Why do you think your books have struck a chord with readers? To what do you attribute your ability to predict what readers want?

It’s been such a thrill, really. I didn’t expect it. I think with The Couple Next Door, there was something about the parental lapse of judgment that resonated with many, many people. A Stranger in the House didn’t have that sort of premise, but readers gobbled it up—and An Unwanted Guest too. I think generally speaking, what has made my books successful—and I’m going by what my fans say, which is almost always “I couldn’t put it down”—is that my books have a relentless momentum that they enjoy. They’re fast moving, and you just have to know what’s going to happen next, and you want the answers to all your questions—the answer to not just what happened, but why. And also, they’re twisty—and readers love to have their expectations upended in a satisfying way.
Learn More About Someone We Know
print

The Last Time I Lied

The End of Her

The Flight Attendant (Television Tie-In Edition)
Back to Top