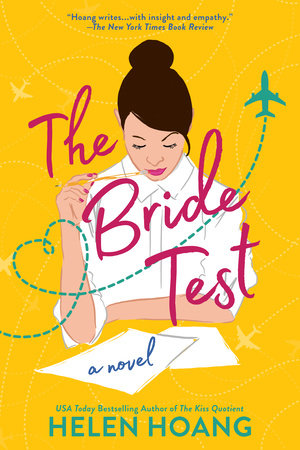 1. Khải grew up in America, while Mỹ was born and raised in a small village in Vietnam. What cultural differences can you see and how do you think this affects who they are now?

2. In the beginning of the book, Khải’s mother is in Vietnam to search for a wife for Khải. Do you think it’s wrong of his mother to meddle and interfere in his personal life, or is this justified as an act of love?

3. Prior to reading this book, how would you have imagined an autistic man? How does Khải compare to this vision?

4. Throughout the book, Khải is adamant about not having feel-ings, thus creating a chasm between him and everyone else. When do you see a breakthrough in this way of thinking? How does Mỹ help with this?

5. Khải memorizes a set of rules that his sister made him that lists what he should do when he’s with a girl (page 37). Do you agree with this list?

6. Though Mỹ originally goes to America with the purpose of se-ducing Khải, a lot of her time is spent going to night school and working at Cô Nga’s restaurant. This reflects the hard work that immigrants go through to build a life in the U.S. Can you or anyone you know relate to this?

7. Mỹ lies to Khải about her occupation and tells him that she’s an accountant. She does this because she’s embarrassed by her sta-tion in life but also to feel some sort of connection to him. Should she have just told him the truth from the beginning or do you think her lie helps bring them together at least a little?

8. As adamant as Khải is about not loving Mỹ, he does things for her that show how much he does care about her, such as carry-ing her and helping to find her father. What other ways does he show he loves her?

9. At the end of the book, Khải tells Mỹ he loves her in Vietnam-ese. What is the significance of this?
Learn More About The Bride Test
print

You Deserve Each Other
Sarah Hogle

The Authenticity Project
Clare Pooley
Back to Top