When We Left Cuba Reader’s Guide 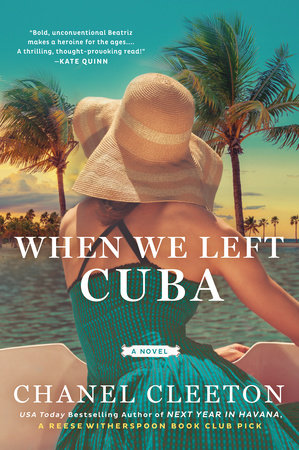 When We Left Cuba Reader’s Guide

Readers Guide for WHEN WE LEFT CUBA
Questions for Discussion

1.In the first chapter, Beatriz says that she is somewhere between the girl she was and the woman she wants to be. How do you see her character grow and change throughout the novel?

2.When Beatriz arrives in Palm Beach, she feels out of place in society and cut off from the familiar people and things she loves. Can you relate to her experience of being a fish out of water? Have you ever experienced something similar, and how did it affect you?

3.Beatriz is motivated by her desire to avenge her brother’s death as well as her love of her country. Which of these motivations is stronger for her, or do you believe they are intertwined? Do you agree with her actions or not?

4.When Beatriz becomes involved with the CIA, she acknowledges that war makes for strange bedfellows as she is now aligned with an organization she once decried. Do you agree with her decision? Do you believe in the axiom, “The enemy of my enemy is my friend,” or do you disagree?

5.Beatriz and Eduardo have a close relationship, and the possibility of a romance between them simmers in the background of the novel. If things had worked out differently, do you think they could have had a future together? Do you think the bond between them is bolstered by their common interests, or is it mainly a product of nostalgia for the life they lived in Cuba? What similarities do you see between their personalities? What differences?

6.Throughout the book, Beatriz struggles to understand Eduardo’s motives. Do you think he acts out of self-interest or patriotism? Do you think he has Beatriz’s best interests at heart, or do you think he uses her for his own ends?

7.Which Perez sister do you identify with: Beatriz, Elisa, Isabel, or Maria? What traits do the sisters share, and in what ways are they different?

8.Each member of Beatriz’s family takes a somewhat distinct approach to exile. Elisa builds a new life for herself in the United States; Isabel leaves her fiancé behind in Cuba; Maria adjusts to life in the United States with ease; parents become obsessed with shoring up their financial and social influence to protect themselves from future ruin. How do you think Beatriz’s feelings about exile differ from those of her family? How is the theme of exile explored in the book?

9.Beatriz chafes at the constraints placed on her by her family and their desire that she find a suitable husband. Can you relate with her desire to please her family while still following her heart? How much of the limitations placed on her are a product of the times and her background?

10.Beatriz and Nick are defined by their loyalties to their respective countries. How do you think this affects their relationship? Do you think timing plays the biggest role in their relationship, or are there other factors that keep them apart? What if they had met in Havana? Or before he was engaged?

11.Both Beatriz and Nick are shaped by war. He’s influenced by his experiences serving in World War II, Beatriz by the Cuban Revolution. How has war shaped them? Has it influenced them in different or similar ways?

12.Mr. Dwyer plays a formative role in Beatriz’s life and almost represents a paternal figure for her. How does their relationship change as the book progresses? Do you think he truly cares for Beatriz or only cares for her utility to the CIA? Is he motivated by self-interest or a sense of patriotic duty?

13.The CIA’s role in Latin America and their efforts in Cuba heavily influenced the events of the early 1960s. What do you think about their motives and policies? Do you agree with their involvement in Cuba’s affairs?

14.Beatriz’s life is defined by the time period she grows up in and the events she experiences: the Cuban Revolution, Bay of Pigs, Cuban Missile Crisis, and Kennedy Assassination, to name a few. What world events have played defining roles in your life? What memories do you have of them? How have they influenced you?
Learn More About When We Left Cuba
print

Out of Love
Hazel Hayes