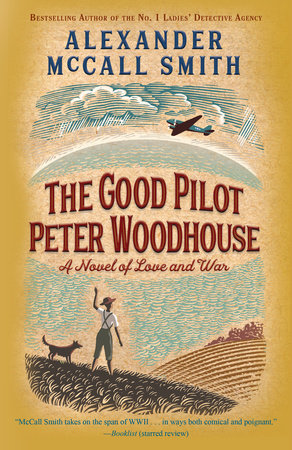 Val Eliot is working on an English farm during the war when she meets Mike, a U.S. Air Force pilot stationed nearby. The two become close, and after Val rescues a border collie named Peter Woodhouse, who is being mistreated by his owner, she realizes the dog would actually be safer with Mike. Soon Peter Woodhouse settles into his new home on the air force base, and Val and Mike fall deeply in love. But when a disaster jeopardizes the future of them all, Peter Woodhouse brings Ubi, a German corporal, into their orbit, sparking a friendship that comes with great risk but carries with it the richest of rewards.
Infused with Alexander McCall Smith’s renowned charm and warmth, The Good Pilot Peter Woodhouse is an uplifting story of love and the power of friendship to bring sworn enemies together.

1. When it comes to the dogs on the farm, Annie says Willy has “a strong sense of right and wrong” (p. 27). But Willy first hits Ted Butters and then steals Peter Woodhouse. Do you think this defensible given that Butters was beating the dogs?

2. Archie plays several roles in Val’s life. Boss, willing accomplice, teacher, father figure. Which roles are most important for Val? What other roles does he play?

3. “People clutched at everything—any scrap of comfort they encountered” (p. 32). Val was considering people’s desperation for the war to end. Have you ever been in a situation where you seized on every bit of hope?

4. When Val meets Mike for the first time, they send three dozen eggs smashing into the ground but have an instant attraction for one another. Do you believe in true love? Or that some people are destined to be together?

5. “She thought that was why they used the expression falling in love, because it was sudden, and unexpected, as a fall is, and it was very much the same feeling, of sudden powerlessness as gravity took hold of you, as love does; love and gravity were very similar: equally strong, equally irresistible” (p. 33). How does this thought apply to the rest of the story?

6. All of the time Mike and Val have together has to be snatched away from work and duty. Do you think that it because it is wartime? Would normal couples have to work so hard to spend time together? Does this strengthen their relationship? If not for the war, do you think Mike and Val would have the same emotions?

7. Mike and his navigator crash in a field in Holland with Peter Woodhouse. While they are all unhurt, they are in enemy-held territory. Why do you think Mike has so much certainty that all will be ok?

8. Ubi takes a great risk by allowing Mike and the navigator to stay in the attic. Why do you think he does so?

9. Mike’s MIA status is devastating to Val. Sergeant Lisowski tells her: “I’d say you could have a tiny bit of hope. A glimmer. But not much more than that” (p. 84). What would cause him to allow her to hope when he knows there may be none?

10. When Val tells Willy she’s pregnant he offers to marry her. “There would have been raised eyebrows, as many people would think that a woman should not take up with a man who was not quite all there” (p. 121). Do you think Val is being fair to Willy? What changes her opinion of this situation during the telling of the story?

12. Ubi thinks about the situation he is in as a prisoner of war. While the Russians are viewed as angry and full of retribution (including stories of cannibalism), the Western Allies forces (Canadian and American), are viewed as more kind, or at least disinterested. Why is there such a discrepancy between the ways different countries treated the POWs?

13. When Ubi is about to be transferred, the Canadians burned his clothing. “It was his past that was in flames, he thought, and he was grateful. He was cleansed” (p. 139). Is surviving a war so easy to get over? What should Ubi feel guilty about, if anything?

14. Of all of the German men returning home, why does Ilse pick Ubi to offer a job? How does that save both of them?

15. Ubi goes to Berlin to find his nephew but ends up being caught behind the blockade. He is forced to stay, away from Ilse, for a few years. Mike ends up staying in the air force, in Germany, much of the time away from Val. In what other ways do the lives of these men and women parallel?

16. An article is published about Peter Woodhouse after he retires from the air force. What are the consequences of this human interest story?

17. Mike and Ubi meet again in Templehof. Why does Mike agree to help Ubi and Klaus?

18. Ubi writes to Val on hearing of Mike’s death, but it is Ilse who ends up being Val’s pen friend. What do the two woman share?

19. Mike’s, Ubi’s, and even Peter Woodhouse’s deaths are not represented in the book, simply mentioned in the course of the story. Why does the author choose this method of telling the reader?

20. Why does Val marry Willy after Mike’s death?

ALEXANDER McCALL SMITH is the author of the No. 1 Ladies’ Detective Agency novels and of a number of other series and stand-alone books. His works have been translated into more than forty languages and have been best sellers throughout the world. He lives in Scotland.
Learn More About The Good Pilot Peter Woodhouse
print

Paris by the Book

The Improbability of Love

At the Water’s Edge
Back to Top