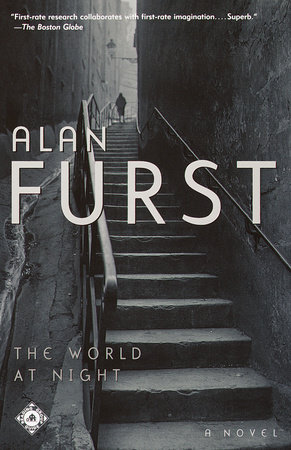 1. If you asked Jean Casson to define the word honor, what would he say? Which, if any, of the following would be included: Loyalty to friends? Loyalty to country? Loyalty in love? Loyalty to self?

2. After his meeting with Simic, in which he is first offered the chance to work for British intelligence, Casson thinks to himself, "You think you know how the world works, but you really don’t. These people are the ones who know how it works.". How would you say Casson’s understanding of the world has changed by the novel’s conclusion? Has he become one of the people who know how the world "really works"?

3. To what extent is Casson culpable for the death of his friend Langlade?

4. During the early years of the German Occupation of France, a common question, which Langlade poses to Casson, was this: "If your barber cuts hair under the Occupation, does that make him a collaborator?" How would you respond? What would you have done in similar circumstances?

5. Alan Furst has said that his books are written from the point of view of the nation where the story takes place. Describe the French point of view as it appears in The World at Night.

6. Critics praise Furst’s ability to re-create the atmosphere of World War II-era Europe. What elements description make the setting come alive? How can you account for the fact that the settings seem authentic even though you probably have no firsthand knowledge of the times and places he writes about?

7. Furst’s novels have been described as "historical novels", and as "spy novels." He calls them "historical spy novels." Some critics have insisted that they are, simply, novels. How does his work compare with other spy novels you’ve read? What does he do that is the same? Different? If you owned a bookstore, in what section would you display his books?

8. Furst is often praised for his minor characters, which have been described as "sketched out in a few strokes." Do you have a favorite in this book? Characters in his books often take part in the action for a few pages and then disappear. What do you think becomes of them? How do you know?

10. How do the notions of good and evil work in The World at Night? Would you prefer a confrontation between villian and hero? Describe Furst’s use of realism in this regard.

Learn More About The World at Night
print

Blaze Me a Sun

The Book of Spies

The Tailor of Panama
Back to Top