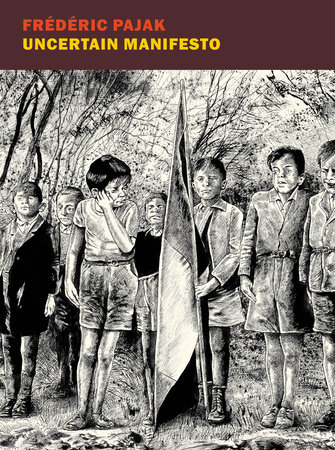 An illustrated artist’s memoir of the motivations, feelings, ideas, figures (including Samuel Beckett and Walter Benjamin), travels, and love affairs that have influenced his life.

The writer and artist Frédéric Pajak was ten when he began to dream of “a book mixing words and pictures: snippets of adventure, random memories, maxims, ghosts, forgotten heroes, trees, the raging sea,” but it was not until he was in his forties that this dream took form as Uncertain Manifesto. The utterly original book that he produced is a memoir born of reading and a meditation on the lives and ideas, the motivations, feelings, and fates of some of Pajak’s heroes: Samuel Beckett and the artist Bram van Velde, and, especially, Walter Benjamin, whose travels to Moscow, Naples, and Ibiza, whose experiences with hashish, whose faltering marriage and love affairs and critique of modern experience Pajak re-creates and reflects on in word and image. Pajak’s moody black-and white drawings accompany the text throughout, though their bearing on it is often indirect and all the more absorbing for that. Between word and image, the reader is drawn into a mysterious space that is all Pajak’s as he seeks to evoke vanished histories and to resist a modern world more and more given over to a present without a past.

With the support of the Swiss Arts Council Pro Helvetia

“[Pajak] meditates on the need to remember the past in order to understand the present…A complex portrait of the nature and power of narrative.” —Kirkus Reviews

“The pieces are quite compelling, succinct and often just slightly off-beat (or off the beaten track, as is the case both with Pajak’s personal experiences and, for examples, most of the parts of Benjamin’s life he writes about), a neat mix of information and relfection. . . The writing is very good, even as the pieces can feel both stark and abrupt; still, a short chronicle such as ‘Two Fascists’ certainly makes for a very powerful read. . . Certainly of interst, and certainly engaging– and leaves one curious about the volumes that follow, and the project as a whole.” —M.A. Orthofer, The Complete Review

“Could Pajak be called an inventor [of the illustrated book]? It remains the case that Frédéric Pajak has brought it to a new perfection.” —Le Nouvel Observateur


“Uncertain Manifesto is amazing, funny, touching. You have the sense that for Pajak making books is a question of life or death.” —France Inter


“What’s so moving is the combination of thoughtfulness and dreaminess, thoughtfulness about himself and about the world at large, and then there’s the mix of drawing and quotation, of dry humor and modesty. What Frédéric Pajak gives us is a landscape in which thought moves.” —Le Temps